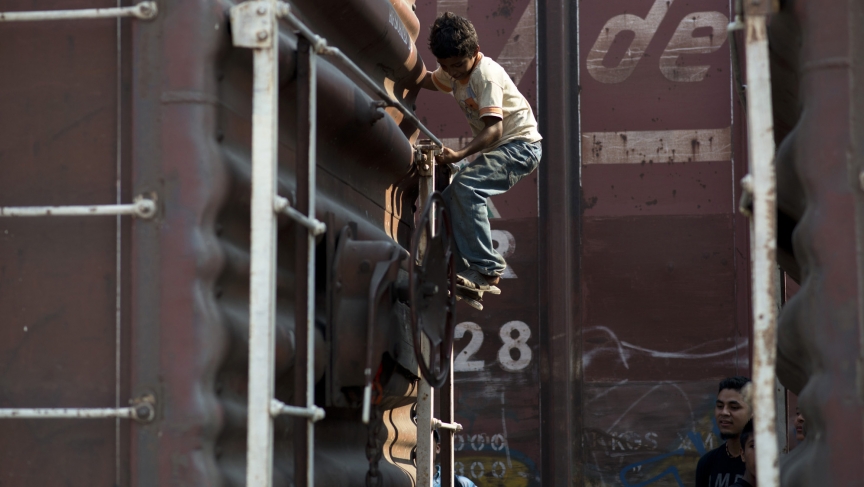 A child boards a freight train near Arriaga, Chiapas, in southern Mexico. Arriaga is the first stop for many Central American migrants making their way to the US.

US border authorities have detained more than 47,000 children under age 18 crossing the US-Mexico border illegally since October. They’re arriving without their parents, escaping crime and poverty and hoping to be reunited with relatives living in the US.

President Barack Obama has called it an "urgent humanitarian situation,” and US officials are scrambling to shelter the children. Once they're removed from federal custody, unaccompanied children face another hurdle: navigating the US courts, most often without an attorney.

When Darlin, who asked not to use his last name, was 16 years old, he left Honduras and began the 1,400-mile journey north to Texas. He travelled by bus and foot. Darlin is now 18. He’s small and soft-spoken. He smiles a lot, especially when he seems nervous.

He says he left home to make money to help his family. He was also fleeing a local gang that asked him to join. When he said "no," he says they shot him.

According to Darlin, when he crossed into Texas, his smuggler, called a coyote, abandoned him at the border. Darlin didn’t know what to do, so he turned himself in.

US officers put Darlin in detention. They fed and interviewed him. Officials determined that he faced a credible threat to his safety if sent back to Honduras. He was released and eventually reunited with an older brother in New York. Then, it was off to immigration court to make his case to stay in the US.

Darlin’s story has become increasingly typical. What’s not typical is what happened next: there was a lawyer waiting for him in court.

Darlin says he was nervous in the courtroom, but felt better with a lawyer. His attorney was there because of the Safe Passage Project, a pro bono program started by Lenni Benson, a professor at New York Law School.

“When a child is in deportation proceedings, the government is represented, they have a prosecutor, the judge is on the bench, there’s a translator there in whatever language the person would speak. But there’s no free counsel,” Benson said.

Undocumented immigrants don’t have a right to a government-appointed lawyer in immigration proceedings, which are civil cases. So, once a month, Benson gathers a group of about 40 people to go with her to immigration court. They’re a mix of volunteer attorneys, law students, and interpreters. The court lets them greet the children. 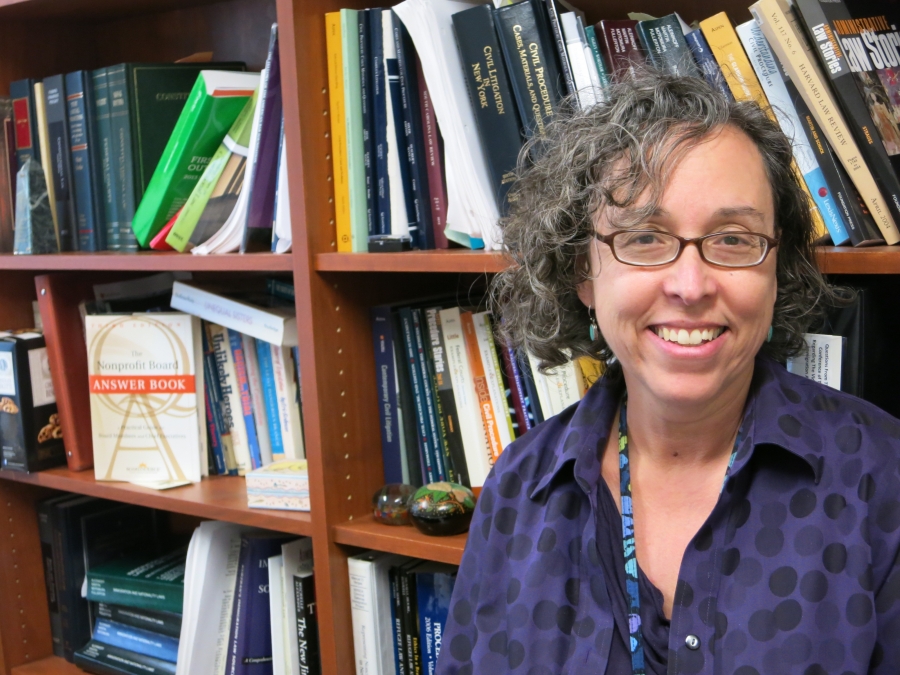 Benson said, “We give every young person who’d like one a free confidential screening to determine their eligibility to remain in the United States or their options for protection.”

Volunteers find out if the children were abandoned, neglected or abused — or if reunification with one or both of their parents isn’t an option. Conditions like these can give the children the option to apply to live here legally, seeking "special immigrant juvenile status."

Getting to this point in the process is difficult: Only a small fraction of kids apprehended at the border get the chance to make their case in front of a judge. If they do, and if they’re in New York, Benson has built a team of 170 volunteer attorneys to represent them. Other legal groups like this are forming across the country as well.

“If you could see a child sitting in the courtroom where their feet don’t even touch the floor in the courtroom chair, and their eyes are as big as saucers, and their fingers and knuckles are turning white as they grip the chair. And they’re looking around the room, eyes darting from adult to adult, trying to understand what’s happening to them. I cannot believe any lawyer, regardless of their speciality, who observed that wouldn’t say to herself or himself, ‘I need to be a part of a solution,’” Benson said.

“I think simple due process mandates that unaccompanied children should have a lawyer,” said Muzaffar Chisti, director of the Migration Policy Institute's office at the New York University School of Law. “Who should bear the cost, I think, is a more complicated issue.”

Assigning government attorneys to thousands of migrant children could cost taxpayers hundreds of millions of dollars. Many members of Congress support the idea of giving the kids legal support — last year, the Senate allocated money to provide counsel for the vulnerable, which includes children. It’s unclear if or when this might become the law of the land. Last Friday, the Obama Administration did announce a $2 million program to encourage lawyers and paralegals to guide migrant children appearing in immigration courts. The program  — a collaboration of the Justice Department and the Corporation for National and Community Service, which administers AmeriCorps — will issue grants to enroll 100 legal professionals in 29 cities. But that's merely a drop in the bucket.

“I think there is a significant reservoir of feeling for this group of people in the private bar,” Chisti said. “If organized in a more robust way, we could have a large number of lawyers on a voluntary basis offering to represent them.”

It will take a lot of them. And the problem isn’t going away. The number of unaccompanied children crossing the border alone could be nearly four times higher than last year. Besides fleeing poverty and violence, the surge has also been fuelled by rumors — that children who arrive at the border without parents won’t be deported.

In New York alone, the courts have more than 6,000 pending deportation cases involving children. Lenni Benson’s pro bono team can only handle a small fraction of those cases.

Her team did manage to help Darlin, the boy from Honduras, earn a green card. Darlin is now a senior in high school just outside New York City.

Darlin said the United States has been better than he ever expected. He feels like he has more opportunities, and he doesn’t worry about his safety. But his American dream comes with a steep cost: the 18-year-old says he misses his mom in Honduras, whom he hasn’t seen in two years.