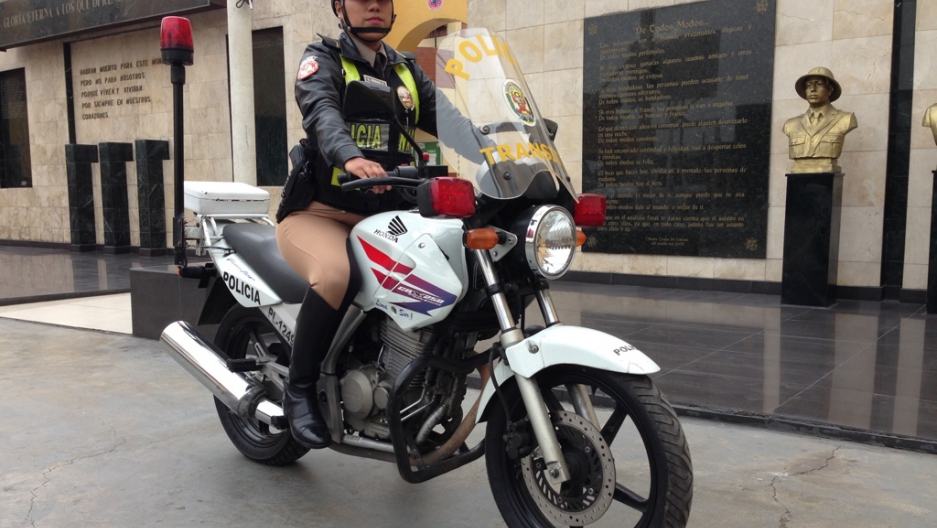 LIMA, Peru — Drunks at the wheel, deadly car crashes, bus drivers violently abusing passengers, reckless motorists who prefer to run over police officers than pull over, and an endless torrent of sexist insults.

In her four years as a motorbike-riding traffic cop on the mean streets of Lima, Estefany Cerro Flores has seen and heard it all.

But there is only one thing that really seems to bother her: the drivers who think they can escape a ticket by offering her cash.

If the rampant corruption that plagues much of Latin America has a public face, then it is probably the lowly police officer who will take a bribe — often as little as the price of a soda — to let motorists get away with traffic violations.

“Corrupt officers do terrible damage to the [police] institution and to Peru,” Cerro Flores tells GlobalPost. “When they let a drunk driver carry on at the wheel they could be responsible for an innocent person’s death.”

The problem has been so severe that since the late 1990s both Mexico City and Lima have been conducting a novel experiment: using female officers to police the capitals’ streets.

Women, the theory goes, are more likely to be honest than their male counterparts.

Although there is virtually no research or solid data, the consensus appears to be that the strategy is working. A 2012 study (pages 82-83) by Proetica, the Peru branch of anti-graft group Transparency International, found that 66 percent of the public views male police officers as corrupt, compared to just 19 percent for female officers.

The problem could hardly be more urgent.

Although they vary across the region, overall Latin America has abysmal driving standards. Road accidents kill more 15- to 29-year-olds than any other cause and slash 2 percent from regional GDP, according to the Inter-American Development Bank.

And nowhere is worse than Peru. It has the highest death rate per vehicle in the entire region. A regular look at Lima’s roads will explain why.

Drivers honking and accelerating when they should be braking, jumping red lights, or suddenly veering across multiple lanes without signaling — are all routine here. Lane markings and pedestrian crossings seem like just a huge waste of paint.

At least some of the mayhem is blamed on the police failing to enforce driving laws. But reckless — and especially, crooked — drivers may have met their match in the women who now make up four-fifths of the transport division of the Peruvian police.

Since August 2013, Cerro Flores, who earns around $700 a month, has reported more than 30 drivers for attempting to bribe her.

“Some of them just don’t get it,” she says. “From committing an infraction they have just gone to committing a crime. You explain it to them and they just get angry.”

Some have argued that using female officers to fight corruption is sexist, betraying a Catholic vision of women as inherently pure “Madonnas.”

Others have criticized the strategy as populist. In Peru, it was first implemented by President Alberto Fujimori, who is now serving a lengthy jail term for, among other high crimes, massive corruption.

“It was a highly sensationalist measure,” says Samuel Rotta of Proetica. “It appeared to be dealing with the problem of micro-corruption in the police but it came from a government that, we now know, was rotten.”

More from GlobalPost: Policewomen are rising up the ranks around the world

Endemic corruption in Peru, and Latin America, has deep roots, stretching back to the colonial era. Many experts also blame a lack of political will today to tackle the problem, meaning that corrupt public officials often feel there is little chance they will face the music.

None of that bothers Cerro Flores. “It’s heavy going,” she says. “The traffic, the racket, the exhaust fumes, and the drivers. When you get home at the end of the day, you are dead on your feet. But I love the work.”