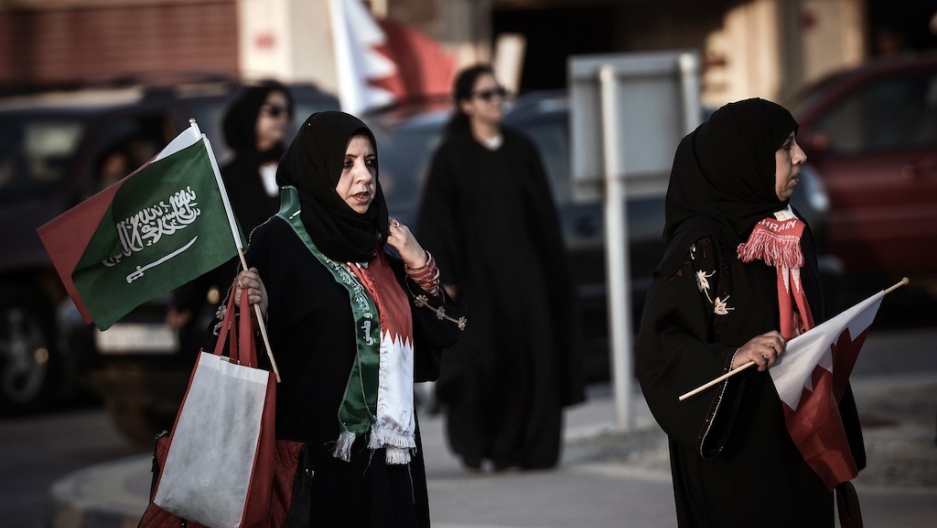 Bahraini women hold Bahrain and Saudi flags during a pro-government rally in the village of Arad on the Bahraini island of Muharraq on February 21, 2013.
Credit: Mohammed Al-Shaikh
Share

This is Part Two of a five-part series to be published in the coming days.

RIYADH, Saudi Arabia — When Mohamed Al Rabeah was in his teens, he discovered an idea that made him doubt the value of mixing politics and religion. Fearing that he was alone, he kept his new interest under wraps.

Then came the Arab Spring and the Twitter explosion in Saudi Arabia. Suddenly, Al Rabeah discovered that many of his peers shared his idea. So they began meeting weekly to discuss it at a house in the desert outskirts of Riyadh. That was the start of an ongoing salon focused on Arab nationalism, or as some call it, Arabism.

It is certainly not a new political idea. But after decades of declining popularity under the ascendance of political Islam, Arabism is seeing a revival of sorts among Saudi youth. They say they see it as a way out of the sectarian conflicts now gripping the region.

“Arabic identity still exists in the people, but it’s like a person who’s sick, and we are trying to revive it and make people stick together, accept each other and eliminate this dividing of people and aggression towards each other,” said Al Rabeah, 26, who is attending law school. “Young people are trying to find an identity that they can unite around.”

Arabism’s appeal to young Saudis, limited as it may be, reveals an uneasiness with using Islam and sectarian identities as political ideologies.

“Young people who like Arabism are rejecting the Islamic groups and political Islam in general,” said Bader Al Ibrahim, 29, an epidemiologist who is another proponent of Arabism. “There are Islamic groups that are in one way or another politicizing these sectarian identities. For example, [former Egyptian President Muhammad] Morsi, he talked about ‘the Sunni project.’”

Al Ibrahim acknowledged that sectarian sentiment pitting Shia against Sunni is now stronger than Arabism in both Saudi Arabia and the region, but he insisted that young people “are not convinced by sectarian rhetoric.”

Religion is important but not in politics, he continued. “We are respecting Islam and Islamic culture [which is] part of the Arab identity and Arab culture,” he said. “But we don’t politicize this Islamic identity because if you put it into politics, you will get more sectarianism, and we can see that in Iraq, Syria and Lebanon.”

Arab nationalism had its heyday in the 1950s and 1960s when Egypt’s Gamal Abdel Nasser was its most eloquent spokesman and promoter. In pursuit of spreading Arabism, Egypt and Syria had a brief, failed attempt to unite as one nation. Still, Arab nationalism, which stresses the common Arab language and culture, was during that time the underlying tenet of the region’s politics and of authoritarian ruling parties like the Baath in Iraq.

But after Israel’s defeat of Arab armies in the 1967 Arab-Israeli War and Nasser’s death in 1970, Arab nationalism waned and Islam increasingly became the polestar of Middle East politics and government.

The Saudi monarchy, whose legitimacy is based on Islam, felt threatened by Arabism, particularly while Nasser was its torchbearer, and still views it suspiciously.

A new book on Arabism, with essays by 13 Saudis, including Al Rabeah and Al Ibrahim, was removed from sale at Riyadh’s International Book Fair in March. Al Rabeah said that fair organizers got word that the Ministry of Interior was “uncomfortable” with some of the essays, especially the one devoted to Arabism and democracy by Al Ibrahim.

The salon that Al Rabeah attends is named Tawasul, or ‘Connect.’ Participants are “all interested in philosophy and politics,” he said. Sometimes they invite guest speakers and videotape the session for posting on YouTube. As Al Rabeah, a Sunni, and Al Ibrahim, a Shia, attest, members of all Islamic sects are welcome. Occasionally the meetings, held in private homes, include both men and women.

Those who support Arab nationalism envision that Arab countries will cooperate politically, economically and militarily with each other. But, as Al Rabeah and Al Ibrahim acknowledge, no one has yet offered a clear plan on how Arabism would actually work in practice, especially given the rivalries and disunity that plague the Arab world.

Al Ibrahim contends that the disunity is because current Arab governments “are not representing people, they are representing their own interests. That’s why we are calling for democracy in the Arab states.”

But why do they think Arab nationalism would be more successful than it was before?

Al Rabeah added, “our failure in the past will not stop us….We are a nation that doesn’t yet have the right to decide our destiny. We are struggling all these years and because we don’t have it doesn’t mean we have to give up….The Arab Spring proved that we have a big need for a united identity.”

Part Three: The rise of atheism in Saudi Arabia