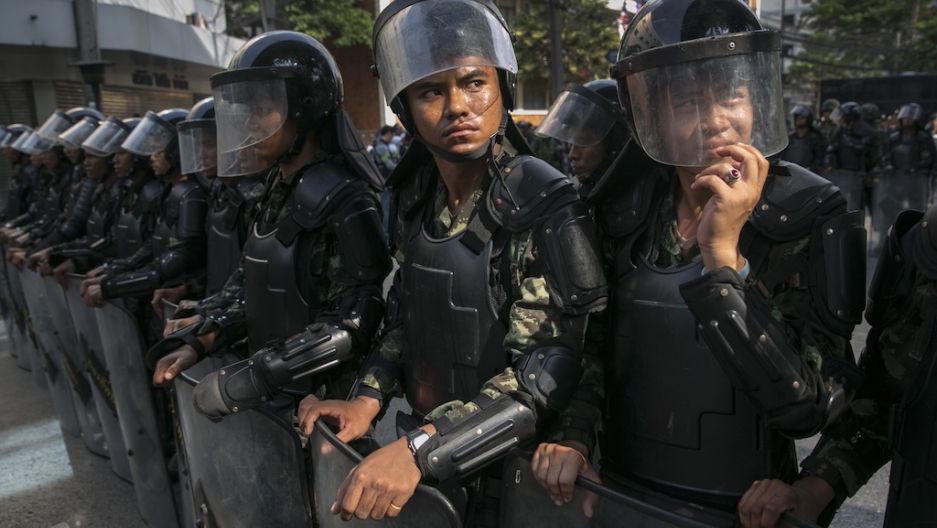 They're branching out into social media.
Credit: Paula Bronstein
Share

BANGKOK — Ever since Thailand’s military seized power in late May, dissent has grown dangerous. Even meek displays of public disapproval — such as crying out for elections on a street corner — can get offenders hauled away and detained.

But on Facebook, Thais seething over the coup have proven much harder to shut up.

The military has swiftly deposed an elected government, corralled hundreds of officials and critics into camps, seized the airwaves and much more. But it still struggles to stop citizens from mocking or maligning the coup on Facebook.

The junta’s solution: creating a patriotic, easy-to-censor Facebook rival of its own design.

Very little is known about the military government’s “Thailand Social Network,” which has yet to debut. But technology officials forecast “clear and concrete” plans emerging within two months, according to Thai-language reports.

“It’s underway,” said Col. Werachon Sukhondhadpatipak, spokesman for the Royal Thai Army. “People get information from their own sources. And some people distort information. We’d at least like to have a channel to provide the correct information.”

Any plan to steer Thais away from Facebook will be wildly ambitious. They do their liking and friending in chic malls, dusty villages and all points in between. The latest tally of Thai Facebook users is 24 million and rising. That amounts to one third of the population.

“The ship has sailed already a long, long time ago,” said Saksith Saiyasombut, a blogger on Thai politics who has monitored the junta’s social media restrictions. “Facebook has throughly planted its flag in Thailand and [the military government] would need more than a Herculean effort to rival it.”

Facebook’s resources are likewise staggering. The company’s market capital, $162 billion, is greater than the annual output of Thailand’s capital Bangkok, an estimated $105 billion.

The Thai junta has learned the hard way that interfering with Facebook is the nuclear option. On May 28, a week into the junta’s post-coup censorship blitz, Facebook was blocked for less than an hour. The goal: to stop Thais from planning anti-coup protests, according to  an official interviewed by Reuters.

The public outcry was deafening — more so even than objections to the junta’s late-night detainments or its shredding of the constitution. The army was so overwhelmed with complaints that a military official quickly appeared on TV to calm the public.

The junta has since promised it will never totally block Facebook — just individual pages deemed subversive. But this page-by-page censorship plan is difficult. Facebook pages that would make the top brass seethe are still easy to pull up inside Thailand.

Coups are all too familiar to the Thai public, which has suffered through 12 successful takeovers since the end of all-out monarchy rule in the 1930s. Censorship sprees following past coups entailed seizing radio and TV stations, shutting down the printing presses and destroying subversive books.

But this is the first coup since Thailand’s full-on embrace of social media — an era when mall rats, upcountry kids, housewives and statesmen are all are smitten with Facebook.

“This is the most outrageous and serious censorship I’ve seen in my life,” said Supinya Klangnarong, a commissioner with Thailand’s National Broadcasting and Telecommunication Commission. (Appointed before the coup, she has so far held on to her job despite her outspoken views on media freedom.)

“It’s very difficult for them to block social media. That’s why you see the army struggling,” she said. “When you shut social media, you have to shut down everything. All of it. You’d have to follow the Chinese model.”

“That’s why they might come out with this ‘Thailand Social Network,’” Supinya said. “It would be easier to control.” Whether or not the junta’s tech team is capable of building a viable Facebook rival, she said, is unclear.

Fishing for signs of dissent in such a vast sea of accounts is painstaking. Officials have maintained “war rooms” to scan for messages critical of either military rule or Thailand’s monarchy, which the army is sworn to uphold no matter how many elected parties come and go. A draconian law forbidding criticism of the monarchy is loosely interpreted; even coded messages and innuendo have landed Thais in prison.

Thailand’s new junta is hardly the only Asian power struggling to snuff out dissent on Facebook. Vietnam, which blocks the social network, launched its own state-run Facebook clone. It flopped. China has proven more successful at blocking Facebook while keeping popular domestic social media sites under its sway.

But the Thai junta faces a public already addicted to Facebook, run by a foreign tech giant beyond its control. It is almost impossible to imagine a military government rolling out a social network that can beat Facebook’s development and design. Instead, it will have far fewer users and much more censorship — hardly the makings of a great sales pitch.

“This project is most likely to fail because of the marketing and PR alone — which has never been the strong suit of state enterprises,” Saksith said. “It’s hard for me to imagine how they could be more appealing and hipper than Facebook and company to most Thais.”