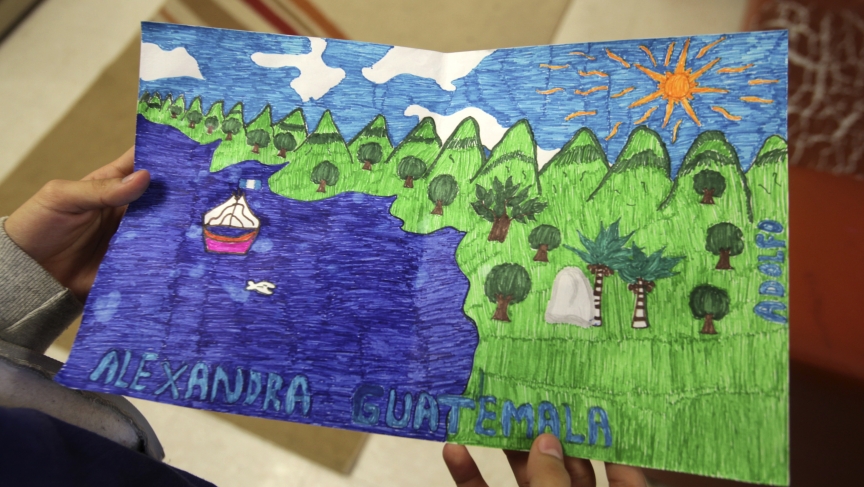 Alexandra from Guatemala shows a drawing she made at a shelter for underage immigrants and repatriated minors.

Imagine for a second what it's like for the kids who trek across the US-Mexico border without documents and without parents.

Last year alone, 24,000 undocumented minors were caught making that journey. The shelters that usually hold them are filled to capacity, so a US Air Force base is being pressed into temporary service to house some of the youth.

Susan Cruz tries to help the minors once they get here. Cruz is a citizen of the United States and El Salvador. She testifies as an expert witness in cases involving undocumented minors.

"One of the main drivers that's pushing these kids out of their home countries is the crime and violence that is almost unchecked by the governments of these countries," Cruz says.

Gang threats played a role in the case of one child that Cruz assisted, a girl from the Salvadoran town of Chapultepec, named "Beatrice" or "Betty," who lived with her grandmother.

When Betty was 12, a Salvadoran gang member began pressuring her to be his girlfriend. The young man threatened her, slipping a note under the door of her home, saying she might be raped or killed if she didn't submit to his demands. Betty's grandmother reached out to the police, but they were of no help. So Betty's family sent her across the border on her own.

Authorities in the US caught Betty and placed her in a shelter for undocumented minors. There she met Cruz, who was able to testify on her behalf, supporting her accusations that the threats the gangs posed were real. Ultimately, Betty was granted asylum.

Another undocumented minor Cruz referred to as Eric was not so fortunate. Eric, who was 16, lived in Honduras with his father, who was a banker. Police would frequently detain Eric for petty infractions, and extort money from his father. Eric's parents stopped paying the "fines" and ultimately Eric landed in a prison with adult inmates. Eric's father paid what Cruz called a "ransom" to get him out of jail. Eric's family sent him to California but he was ultimately deported, and returned to Honduras where he was killed. Authorities have not found those responsible for the murder.

"We have to look at what's happening in their home countries, and try to address what are the voids, what's missing, why isn't there anyone around protecting these children and youth?" Cruz asks.  "And why is it when something bad happens to them, people have acquiesced to the fact that this is just the way things are?"