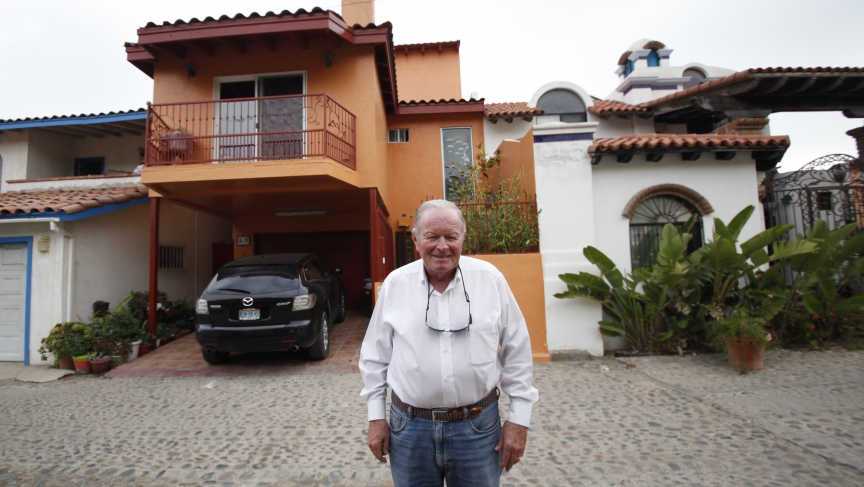 Gil Devine in front of his home in Mexico, near the border. Devine commutes to work six days a week in San Diego.

The San Ysidro border crossing between the US and Mexico is the world’s busiest crossing. And it is only getting busier as Californians look for a beach they can call their own.

Gil Devine is one of them. He sets his car radio to country music as he makes the painfully slow crawl — of 13 miles — from his work in San Diego to his Mexican home south of the San Ysidro crossing. He joins the 90,000 people who make the crossing every day.

"We should be across the border in less than five minutes from here," he says, assuring me that this is a "light" traffic day. “It's nothing out of the ordinary for me."

Then we see a massive Mexican flag, armed border guards and 24 kiosks at the Port of Entry, with hundreds of cars funneling through.

"We got a green light, so we don't have to stop or anything. We can go on," he tells me.

Devine's been making this cross-border commute for 11 years, moving between the US, where he works as a yacht broker in San Diego six days a week, and Mexico, where he lives with his wife and two kids.

Devine used to live in the US. Then, in 2004, he ventured south of the border with his now ex-wife to look for a beachfront vacation home. He ended up in the Real Del Mar community, about 15 miles south of San Ysidro.

His two-story, three-bedroom house overlooking the ocean cost just $140,000. “It would be 10 times that amount [in the US],” he says. “There's nothing with a good ocean view in California for less than a million or two.”

Devine loved this neighborhood so much that, within months, he decided to live here full-time. Now, he has lots of company.

In the coastal city of Rosarito, a realtor named Gustavo Torres says he's been getting a lot of calls from American homebuyers lately. He appreciates that because five years ago, when the housing bubble burst here, he says the neighborhood looked like a ghost town.

Improvements at the San Ysidro crossing have also made the US-Mexico commute much easier. This fall, the Port of Entry will expand from 24 to 64 traffic lanes and booths. You can also apply for a "sentri" pass — a card that lets you take the fast lane across the border.

Torres says Americans are arriving because they've been hearing that Mexico's crime rates are coming down, after years of drug war violence.

"They feel safe again because the perception of insecurity started disappearing once Americans came and talked to their friends and said it was really safe."

These days, he says, 60 percent of homebuyers in Baja are American, and many others, like Gene Figueroa and his wife, are opting for a three-month trial, renting a beachfront condo first before taking the plunge into ownership. The couple moved here from Orange County.

“It was always my dream to be able to live on the beach,” says Figueroa. “Growing up in Southern California, as the population increased, I couldn't even afford to live anywhere near the beach.”

The cost of living may be good here, but Gil Devine admits life in Mexico has its challenges. The roads aren't all paved, making for a rocky commute. And there aren't many well-paying jobs — which means you almost have to commute. His Spanish is still limited, making it tough to communicate with his new Mexican wife and stepchildren.

Still, like 50,000 other Americans who live in Baja now, Devine says he has no plans to leave. “A lot of my friends like to come down and visit. They love the area. They just don't have the guts to do it. People think it's a major change, and it's not."

Living here just means he has to cross the world's busiest border — twice a day.