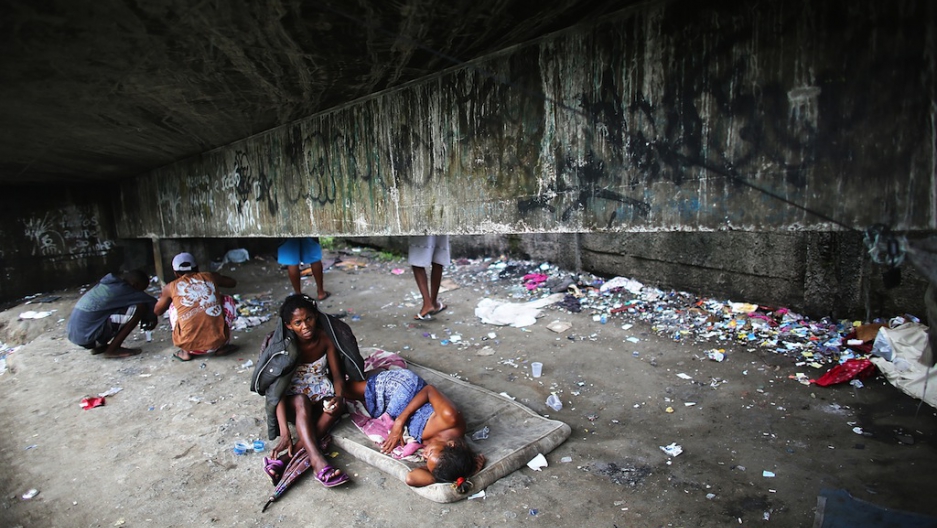 Drug users gather beneath an overpass in an area known as 'Cracolandia', or Crackland, in the Antares favela, in Rio de Janeiro, Brazil.
Credit: Mario Tama
Share

ANTARES, Brazil — “Cocaina!” a bony teenager shouts out above transparent plastic bags of white powder measured in doses and arranged neatly next to price tags on a wooden table.

Beside the cocaine are baggies of compressed marijuana and crack rocks also being sold to a steady stream of customers.

A dozen yards away, a young man drives up the dirt slum street on a motorcycle, an AR-15 assault rifle with a grenade launcher strapped to his back.

He makes no effort to hide the weapon. When the police come into this slum, known here as a “favela,” it’s in conspicuous, heavily armed convoys, which traffickers's scouts soon spot — giving dealers time to run, or to shoot first.

“We hate the police here,” says Lucas, a 28-year-old running the drug “shop.” “We are just trying to make money. They are murderers.”

This surreal scene in the favela known as Antares, on the far edge of sprawling Rio de Janeiro, is a side of Brazil the government doesn’t want tourists to see when they come in the hundreds of thousands this month for the World Cup.

Rio’s favelas, home to about a million people, have long been used for drug dealing, providing a steady income for some of Brazil’s poorest citizens.

It’s a big market: Brazil has become the world’s second biggest consumer of cocaine after the United States. Brazilians smoke or snort about 90 tons of the disco powder a year, according to the United Nations Office on Drugs and Crime.

Until recent years, open drug selling was common much closer to the heart of Rio — in favelas such as the Pavao Pavaozinho, which snakes up the city’s hills a stone’s throw from the celebrated Copacabana beach.

But police have pushed out much of this blatant flouting of the law with a so-called pacification program, in which they storm into the favelas with overwhelming force and establish a permanent presence.

The offensive started in 2008, the year after Brazil was awarded hosting rights for the 2014 World Cup, and has steadily spread.

Homicides are down by 65 percent in ‘pacified’ areas, according to Rio's state government.

In March and April this year, police backed by armored vehicles and helicopters swarmed into the Mare, a massive favela complex that’s hosted intense firefights between traffickers and police.

Rio de Janeiro’s state government is hailing the pacification as a success, reporting that homicides dropped by 65 percent in those areas from 2008 to 2012.

In central favelas — which tourists might see — traffickers can no longer sell coke and pot so openly or carry assault rifles. One has to travel far out in the urban jungle to reach such scenes like the one in Antares.

At the same time, there’s been limited gentrification of some favelas, with middle-class Brazilians and foreigners buying a few properties around and inside them.

However, the pacification program has been criticized, with police accused of murdering some of the residents they are meant to be protecting.

In April, a well-known dancer, Douglas Rafael da Silva, was shot dead in the Pavao Pavaozinho favela, provoking protests that turned into clashes.

Police claim they were returning fire with drug traffickers at the time of da Silva’s death and weren’t sure whose bullet hit him. But witnesses in the Pavao Pavaozinho favela told GlobalPost that officers had shot at unarmed youths because they were smoking marijuana.

“Police are totally unprepared for working in this community,” says Paulo dos Santos, a neighbor and actor, who worked with da Silva.

“They are the law, but they don’t respect it. We don’t want these type of cops.”

One problem is that the authorities are failing to meet a promise to pair police suppression with new schools and investment in the slums, activists say.

“There is no social aspect to it,” says Andre Fernandes, who runs a favela news network. “It is a project of power that just criminalizes the poor.”

Another complaint is that pacification doesn’t stop the drug trade, but merely shifts it.

“The problem is that the drug dealers still exist in these areas,” says Oliveira, who has a bullet embedded in his head from a confrontation with traffickers. “Police occupy the territory but they haven’t arrested the drug dealers or taken their weapons.”

Meanwhile, the most hardened gangsters can take refuge in “unpacified” favelas such as Antares, which is controlled by a gang called the Comando Vermelho, or Red Command.

Back at the drug shop, Lucas oversees sales to dozens of customers handing over crumpled bills for bags or vials.

With tired eyes, Lucas says he is finishing a 24-hour shift. The drug point takes in thousands of dollars each day, he says, but as an employee of the Red Command he only makes a small percentage.

“This may look easy but it is hard, stressful work,” Lucas says. “That’s why I look like I am much older.”

Lucas says he has been involved in the drug trade since he was 12 and has been in countless gunfights with police.

He tried to get out for a while, hoping to be a professional soccer goalkeeper. But he suffered an injury and took refuge back in the gang.

“I want to get out, to find a proper job, but it’s hard,” Lucas says. “I know this life only leads to jail or the cemetery.”

As night falls in the Antares, residents arrange stacks of speakers for a dance party to electronic music, known as a “baile funk,” which Lucas says the drug dealers have paid for.

Young and old come out of ragged homes and shake their bodies to pulsating, distorted beats.

Several gang members stand openly with their rifles, some dancing as they hold them.