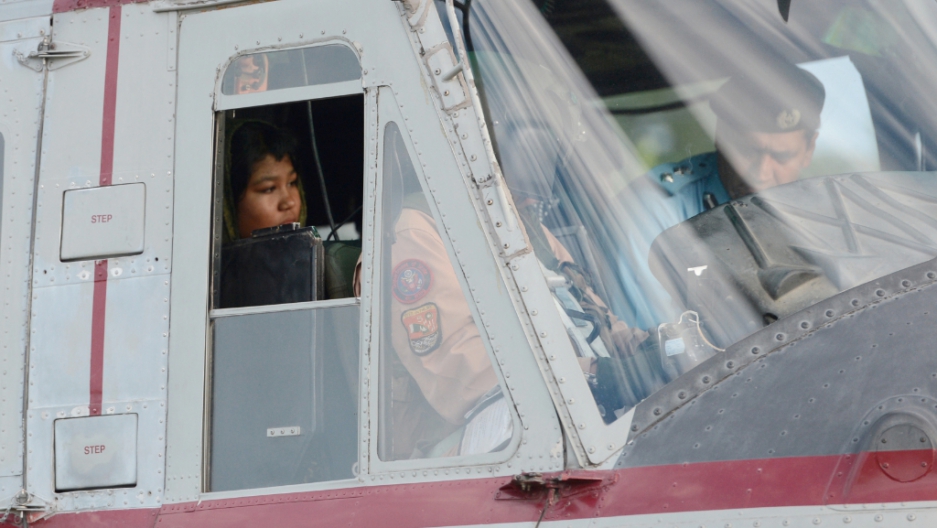 Rimsha Masih, a Christian girl accused of blasphemy sits in helicopter after her release from jail in Rawalpindi on September 8, 2012. Masih was arrested on August 16 for allegedly burning pages containing verses from the Koran but she was released from a prison in Rawalpindi after a court accepted her bail application.
Credit: Farooq Naeem
Share

A decent chunk of the world still has laws against blasphemy, speaking against God, and apostasy, the act of abandoning your religion.

But Sudan isn't the only place where something like this could happen. The Pew Research center recently released a study of global apostasy and blasphemy laws. The map below shows all of the nations that had an apostasy law in some level of government in 2012. Pew found that one-in-ten of the world's nations have such laws. The punishments for apostasy range from a small fine to the death penalty.

All of the 21 countries that had apostasy laws in 2012 have prodominantly Muslim populations, most have Islam as the official national religion.

The punishments vary. Some places are more religiously strict than others. For example, in the island nation of the Maldives, according to Pew, anyone who wants to be a citizen is required to be Muslim. And converting to another religion can lead to revocation of citizenship.

But before you get to thinking religion-based laws are purely a Muslim thing, check out this map of places with anti-blasphemy laws. The colors represent the dominant religion in the nation. According to Pew, 22 percent of the world's nations have laws against blasphemy.

Pakistan has gotten the most press recently for it's blasphemy laws. In 2012, according to Pew, the country filed more than two dozen cases.

While Europe still has laws on the books, they're not used as frequently. For example, it took until 2012 for the Dutch Parliament to strike it's blasphemy law even though, according to Pew, it hadn't been used for more than 50 years.

While the United States may not appear on this map, Pew finds there's still some traces of anti-blasphemy mentality here. As of 2012, both Massachusetts and Michigan had anti-blasphemy laws. But don't fret if you're secular, as the Pew Center notes, "the First amendment to the US constitution would almost certainly prevent the enforcement of any such laws."