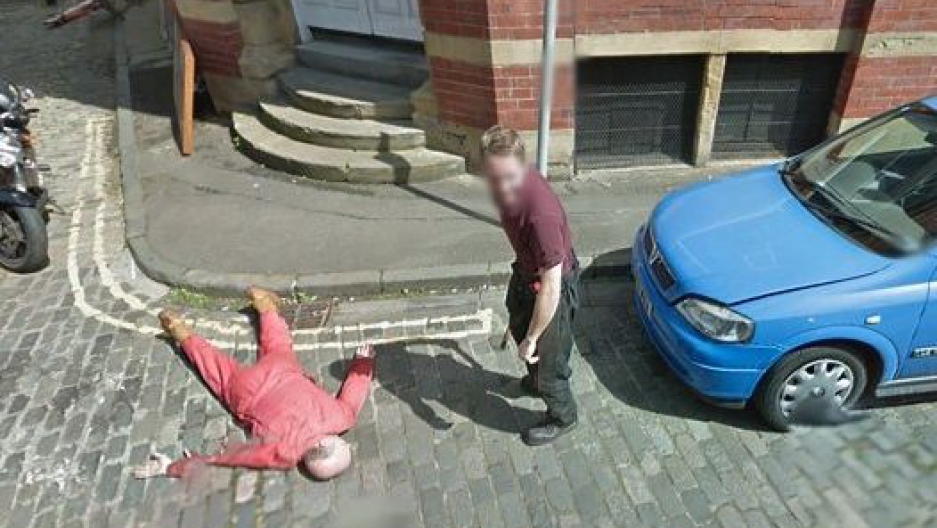 A garage owner in Scotland is apologizing after staging a fake murder with his buddy to prank Google Street View that instead sparked alarm among users and a call from Edinburgh police.

Dan Thompson, 56, lay on the street while his colleague stood over him with a pick axe after spotting Google's mapping car. The incident happened in 2012, but wasn't discovered and reported until recently.

"There are pictures of men on Google flashing their bums, but we thought we would be more classy," Thompson told BBC Scotland.

Classy isn't the word that comes to mind here, but it's certainly on par with some of the other Google Street View pranks that have been pulled around the world in recent years.

These dudes in Norway are among the most infamous Google pranksters, dressing in full scuba gear and chasing a Google camera car down the street wielding harpoons in 2010.

Then there's this girl, who pulled a prank similar to the mechanics in Scotland by playing dead in the street as a Google camera car drove past. Anxious residents contacted Google only to discover the "body" belonged to 10-year-old Azura Beebeejaun, who confessed to playing the prank outside her home in Worcester in 2010.

In Japan, a group of students staged this super creepy pic on a sidewalk along the Tamagawa-josui channel in the Musashino District of West Tokyo. When the Street View bike passes them they turn around to look back. Nicely done.

Larping! It's always strange and somewhat amazing, but these guys in Pittsburgh took it to the next level by staging a "battle" for Google Street View cameras on an empty lot in 2011. Complete with homemade armor and baseball bats in place of proper swords.

Mooning is a prank as old as time, and these teens in Nova Scotia were able to quickly drop trou as Google's camera car rolled past in 2013.

Last but not least, there's Horse Boy. This guy showed up in several Google Street View pictures of Aberdeen, Scotland, in 2010. Google took down the first one, seen here, for a while but later restored it. Several theories exist about Horse Boy's identity. Some think he's just a corporate publicity stunt while others point out it could be anyone in a cheap mask. No one really knows for sure.