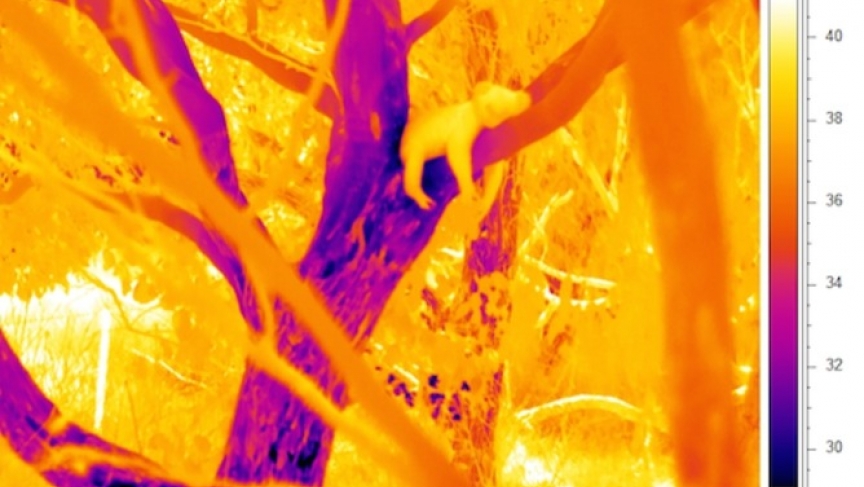 Thermal image of a koala

But did you ever wonder why koalas hug trees? Some scientists in Australia did.

A team of researchers from the University of Melbourne has published a new scientific study, which reveals that koalas hug trees to keep cool.

"One of the questions we wanted to ask about the koala is, 'do they use behavior at all to regulate their temperature? Are they able to choose places in their trees that make them more comfortable?'" Dr. asked Michael Kearney, one of the study's co-authors.

The team used a thermal camera to take pictures of a koala population on French Island, near Melbourne, on a particularly hot day.

"It was so obvious when we got those pictures back what the koalas were doing. They were putting their bottoms into the cool forks of these trees and dumping all their excess heat into the tree," said Kearney.

The team witnessed French Island koalas seeking out lower branches and laying flat along the surface to cool down.

And the fur on a koala's underside is thinner than the fur on their backs, so they push that fur and that part of their body as much against the tree as possible.

And the species of tree is also a deciding factor for where the koalas hung out.

"It turned out the acacia was the best one to be in for losing heat into the trunks, but [koalas] don't eat the leaves of the acacia trees, they only eat the leaves of the eucalyptus trees. So they were leaving their food tree to go into these non-food trees because, we think, for the very reason that they could dump heat more effectively into the trees on the hot days," he said.

Kearney predicts koalas will use this behavior more and more as climate change leads to longer and more extreme heat waves.