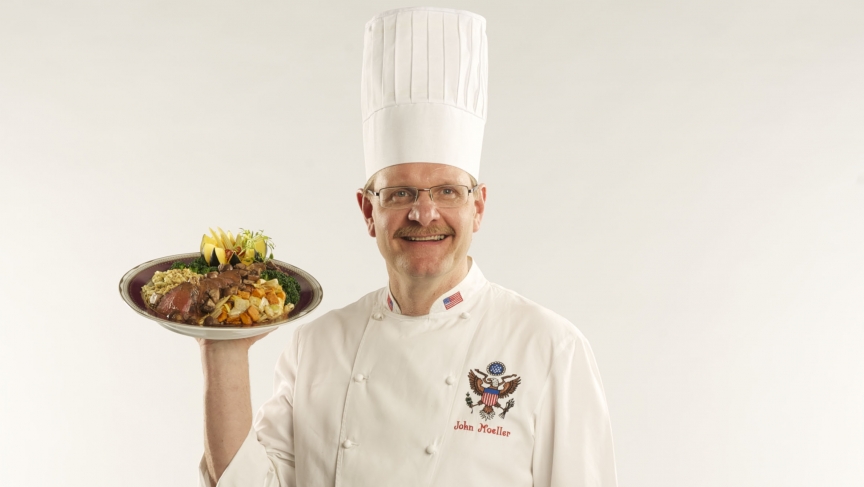 On Thursday, French President Francois Hollande will host foreign dignitaries to commemorate the 70th anniversary of D-day. And the celebration will conclude with a state dinner — or, rather, two state dinners.

Officials told the AP that President Hollande will eat twice, once with President Obama and then again at a late dinner with Russian President Putin.

“The closest thing that came to anything remotely like that," says Chef John Moeller, who ran the White House kitchen under three presidents from 1992-2006, "would be when the Palestinians and Israelis signed a peace accord in 1993.”

“We were going to have a dinner to commemorate [the signing,] but they said. 'we are ready to sign this paper, but we’re not ready to break bread together.'”

Chef Moeller knows something about the intersection of food and politics, and even authored the cookbook, Dining at the White House.

He says the Palestinians and Israelis didn’t break bread that time, but if they had, he would have tailored a separate menu for each delegation. And first off, he would have received a list of dietary instructions from the State Department. “You had a few allergies you had to deal with and dislikes,” says Moeller.

For example, the German chancellor at the time preferred American beef and lamb, he says. But his most unusual request came from the prime minister of Italy a decade ago.

“And I got the dietary restrictions in and it said, ‘Does not eat onions, garlic and tomatoes,’ and I read it six times to make sure that I read it all correctly,” says Moeller.

Allergies and dislikes aside, the state dinner is an integral part of diplomacy. After meeting all day, it’s the one chance that diplomats and heads of state have to put politics to the side.

“They get a chance to enjoy themselves and maybe not get so heavy into what the meetings were all about. It’s a get-to-know-you and I think it’s very, very important. That’s what food does, is bring people together,” says the chef.