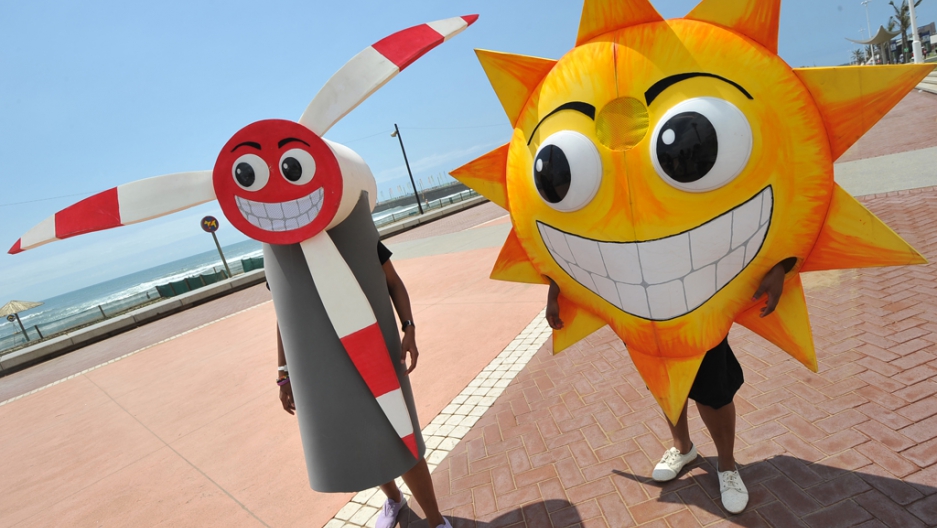 Greenpeace activists try to promote the use of renewable energy, using solar and wind power, on November 29, 2011 on the Durban beachfront. UN climate talks got under way on November 28 in Durban amid calls for action to head off worsening drought, floods and storms but also to fears of a bust-up just two years after a near-fiasco in Copenhagen. AFP PHOTO /ALEXANDER JOE (Photo credit should read ALEXANDER JOE/AFP/Getty Images)
Credit: ALEXANDER JOE
Share

The heatmap below shows which countries in the world are consuming the most petroleum. Hover over a country to see how many thousands of barrels a country uses per day. Looking at this heatmap, we can instantly see how much more oil the United States is using compared to the rest of the world.

The chart below shows the top 10 consumers of petroleum listed as a percentage of the total world consumption. The countries in bold are also top petroleum producers. The United States accounts for 20.7 percent of the global consumption of petroleum. It's almost double China, the second highest consumer of petroleum.

What's worrisome is that neither China nor the United States produce anywhere near enough petroleum to satisfy their consumption needs. Russia and Saudi Arabia, though, are producing much more oil than they require.

The consumption habits of the top petroleum users become even more interesting when you look at it over time. The chart below shows the last two decades of oil consumption for the top 5 consumers.

The map below shows each country's petroleum production. Hover over a country to see how many thousands of barrels a day the nation produces. Russia, Saudi Arabia, and the United States stick out as the top producers.

The dominance of Russia, Saudi Arabia, and the United States in the oil production market becomes even more clear when you look at the top producers as a percentage of the world total. But, while Russia and Saudi Arabia are consuming a fraction of what they're producing, the petroleum produced by the United States just barely covers half of what the country is consuming.

When you look at how much oil has been produced by Saudi Arabia, the United States, Russia, China and Canada since 1992, long term trends become clear.

Saudi Arabia, the United States and Russia have dominated the world oil supply for the last decade, but that wasn't always the case. US oil production was steadily declining until the 2008 boom, when lower oil prices from the recession and new fracking technologies resulted in a steady increase in domestic oil production. Russia, too, dramatically improved their oil production. The upswing in oil production coincides with Russia's passage of a new energy strategy in 2000.

The map below shows how many billion cubic feet of natural gas each country consumed in 2012. Hover over a country for details. The United States and Russia are the top consumers of natural gas in the world.

Combined, the US and Russia account for nearly 35 percent of the world's consumption of natural gas. These two countries are also the top producers, and both produce enough natural gas to satisfy their consumption needs.

The American and Russian dependence on natural gas is nothing new. Looking back at the last two decades, both countries have used significantly more natural gas than the other top consumers. The United States has consistently been the top consumer by a wide margin.

The map below shows who is producing the world's natural gas supply. Hover over a country to see how many billion cubic feet of natural gas was produced in 2012.

The chart below shows the top 10 producers of natural gas. Once again, the United States and Russia top the list. This time though, Russia produces almost as much as the United States. The two countries combined make up nearly 40 percent of the world's natural gas supply.

The United States didn't always top this list. When you look at the top five natural gas producers since 1992, we can see that Russia and America have a close battle going for the top spot. Only recently has America become the top supplier in this market.

According to the US Energy Information Administration, coal accounts for 28 percent of the world's energy consumption. In China, however, coal accounts for 70 percent of the energy consumed. China's affinity for coal compared to the rest of the world becomes clear when you look at the map below. Hover over a country to see how many thousands of tons of coal it consumes annually.

The countries below are the top 10 coal consumers. They were responsible for 85 percent of global coal consumption in 2012. China's ferocious coal appetite becomes clear when you look at the top coal consumers as a percentage of total world consumption. It consumes almost as much coal as the rest of the world combined, and consumes four times the amount of coal as the United States.

China wasn't always the biggest coal consumer. Looking at the top five coal consumers since 1992, we can see China's coal consumption was pretty steady until 2002 where it began increasing dramatically compared to other nations.

According to a recent report by the EIA , China has increased its coal consumption by more than 2.3 billion tons over the last decade, accounting for a staggering 83 percent of the total global increase in coal consumption.

The map below shows global coal production by country. Hover over a nation to see exactly how many thousand tons of coal it produces annually. Once again, China dominates compared to the rest of the world, producing 46.3 percent of the coal supply in 2012.

Along with being the top consumer of coal, China also produces almost as much coal as the rest of the world combined.

Looking at China's coal production over time, the curve mirrors their consumption curve.

According to the EIA, China made up 69 percent of the 3.2 billion-ton increase in global coal production in the last 10 years.

China and the United States are the biggest global culprits when it comes to C02 emissions. They're not alone though. The entire world takes part in burning non-renewable energy, putting carbon dioxide into the atmosphere everyday. The map below shows how many million metric tons of C02 each country emitted in 2011.

While as an entire nation, the United States is more environmentally friendly than the Chinese, on a per capita basis we're much more wasteful. In 2012, the average American produced about 18 metric tons of carbon dioxide, while the average Chinese person produced only 6.5 metric tons.