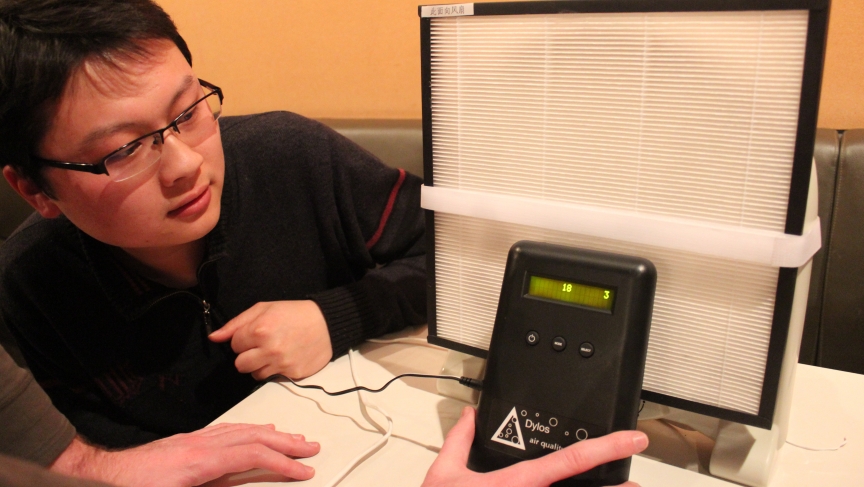 A group of people gather at a coffee shop in Shanghai to learn how to put together simple air filters with a fan and velcro.

On weekday mornings, I get my 2-year-old daughter ready to go to day care. On bad air days, I pull out the tiny face mask I’ve bought for her.

She actually likes wearing it — and it does look cute on her — but it’s depressing. Each time I put it on her, I’m reminded of the risks we’re taking with her health by living here.

In China, sometimes the air pollution is so bad that you can’t see anything in front of you. There have been more than a few days in recent years when the air quality in Chinese cities has been rated “crazy bad.”

It’s a frightening thought. But rather than feeling hopeless about the situation, some people in China are taking matters into their own hands.

In a small coffeeshop in Shanghai, a bunch of people have gathered to learn how to do it. They watch a PowerPoint presentation and then, out come the pliers and mini-saws.

Each participant removes the grating from a fan and saws off an unwieldy piece of plastic. Then they secure a HEPA filter to the front with a Velcro strap.

“Guess what? You just built yourself a basic DIY kit. Give yourselves a round of applause,” says Henry, the man leading today’s workshop.

The whole process takes just a few minutes, and it makes everyone in the room wonder, why do commercial air filters on the market in China cost upwards of a $1,000?

“People need to know that protecting yourself from air pollution is not rocket science. It’s cheap and it’s easy,” says Gus Tate, an American who runs Smart Air, the company that organizes the workshops. Tate is a would-be Chinese teacher and stand-up comedian who sort of fell into the business after a friend started doing experiments with building homemade air filters. They did some research and found that the homemade filters stacked up surprisingly well to the expensive brand-name ones.

At the workshop, the big “aha” moment comes when Tate pulls out a particle counter that measures how well the air filter is working. After turning on the filters, the group watches as the numbers on the particle counter drop. It's not clear how much protection they provide, but people here are impressed.

Smart Air sells simple air filters for about $30, and they will send you the parts if you want to put it together yourself. They’ve also posted all their research and instructions online for anyone who wants to source the materials themselves. That’s how my friend Anthony got started on his air filter hobby.

Anthony works as a chef, but when he’s at home, he likes to tinker on his own DIY projects. Lately, he’s been trying to improve on the air filter kit he ordered online. So far, he’s built two different filters and has plans for more. He says even if he could afford to buy an expensive model, he wouldn’t do it.

“I always like to do things with my hands and this is fun, and much cheaper,” he says. “All those Chinese products are basically the same idea, but they charge much more. Why not just do my own?”

In addition, Anthony says his air filters have given him a sense of control over the pollution.

“At least when you’re feeling hopeless, there’s some hope,” he says. “Maybe it doesn’t work all that well, but it makes me feel a little better.”

Across town, another group is trying to develop plans for an affordable air filter that anyone can build themselves. This is Xinchejian, China’s first Hackerspace, where techies and inventors come together to work on projects.

Bernie War, an American commodities trader, is a regular here. A few months ago, he asked the question: “Why isn’t there an open-source air purifier?”

He and others meet weekly to brainstorm ideas. Their first prototype is already in development — a sleek black bamboo paneled cube that looks like a piece of modernist furniture.

Shanghai turns out to be an ideal place to work on this kind of project.

“All the resources and tools are here,” Bernie says. “You can build, you can get a lot of brilliant people involved. So why not do something together better?”

Today, Yan Senwei, a 24-year-old auto engineering student, has dropped in to help.

“We want to make an air purifier that will be accessible for most of people,” he says. “It won’t solve the air problem radically, but it’s still good to provide the public with a reasonable solution.”

That’s important because even though the Chinese government is promising to tackle the country’s air problem head on, experts say it will take years to see results.

In the meantime, Jing-A Brewery in Beijing is offering another kind of DIY relief.

Their newest beer on tap is called Airpocalypse IPA. When pollution levels go up, the price of the beer goes down. And if the air quality index crosses 500 (above 150 is considered unhealthy; above 300 is considered hazardous) — so, literally, off the charts — the beer is free.

I guess even on the worst China smog days, there’s still something to feel happy about.