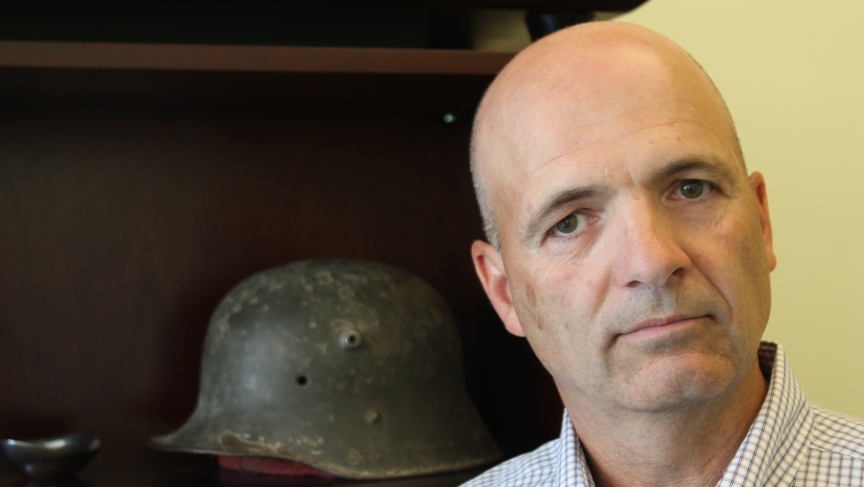 Former Special Forces Engineer Sargeant Layne Morris lost the vision in his right eye during a grenade attack in Afghanistan in 2002. He's now suing the former Guantanamo detainee who threw the grenade.

Former Special Forces Engineer Sergeant Layne Morris has traded in his fatigues for a pressed, button-down shirt. When you look closely, you can see that something is a little different about his right eye, though he seems to look straight at you.

“The right eye is blind, but it tracks with my left. A piece of shrapnel went through the optic nerve, so it just cut the power,” says Morris, at his office outside of Salt Lake City, Utah.

Morris lost the vision in his eye in a firefight in 2002 at an al-Qaeda compound in Afghanistan. Still, he’s not complaining about the injury.

“I’ve got one really good eye, and so for me, life has not changed. In a lot of ways, life is better for me. You gain a greater appreciation for life having gone through things like that.”

Yet Morris is suing for damages, along with the widow of Christopher Speer, a US soldier who was killed in the same 2002 incident. They have filed a $44.7 million wrongful death and injury lawsuit in US federal court. It’s aimed at the man accused in the attack, Omar Khadr, a Canadian national who was once the youngest detainee at the US detention facility in Guantanamo Bay, Cuba. He’s now in a prison in Canada.

Morris says he’s not looking for personal gain with this lawsuit. “I have a duty here and I’m uniquely in a position to carry out that duty.”

He says he wants to help Speer’s family. And he’s also concerned about what Omar Khadr might do in the future. “It appears to me that he is a significant security risk to our country,” Morris says.

In 2010, Omar Khadr pleaded guilty at a US military hearing in Guantanamo to five war crimes, including the killing of Speer. But Dennis Edney, Khadr’s attorney in Canada, has said that Khadr only signed the plea deal so he could avoid continued abuse and torture in Guantanamo and return to Canada. Edney has said that fundamental principles of law and due process were abandoned in Khadr’s case.

Khadr has filed a lawsuit of his own against the Canadian government, accusing Canadian intelligence officers of violating his rights when he was first detained. He’s asking for at least $20 million in damages.

And that’s what worries Layne Morris.

“I’m convinced that Omar Khadr, as a free man with millions of dollars burning a hole in his pocket, those dollars are not going to go towards activities that are in the best interest of my country,” Morris says.

Part of the reason Khadr’s military trial has been so controversial is that he was only 15 when he was wounded and captured in Afghanistan. He’d been living in Pakistan with his family, who were known to have ties to al-Qaeda.

Khadr’s lawyers and human rights groups have said he was groomed to be a “child soldier” and should have been sent home for rehabilitation. Morris says from what he saw, Khadr knew what he was doing.

“Fifteen is young, but it’s also old enough to be able to display a dedication and a resolve, and a courage. I mean, it’s really to be admired that a young man at that age did not flake out. It would have been easy to surrender,” according to Morris.

He says Khadr was the only one who remained alive after the firefight with US soldiers, and, instead of surrendering, threw the grenade that killed Speer.

Eight years later, Morris attended Khadr’s legal proceedings at Guantanamo. During the sentencing hearing, Khadr apologized to Speer’s widow, but Morris says he came away from the proceedings convinced that Khadr was a danger to society — now a grown man with combat experience, religious expertise, knowledge of multiple languages, and demonstrated leadership among fellow detainees.

“He’s got a lot of things that [Osama] Bin Laden didn’t have. The thing he’s missing is a bunch of money, so for him to get that, and freedom — and it sounds like they are going to parole him in a few years at the latest — we’re really setting this guy up to be a thorn in the side of the West for the rest of his life.”

Khadr is now serving an eight-year sentence in Canada. Under Canadian law, he’s eligible to apply for parole. His lawyer, Dennis Edney, has not yet responded to requests for a comment on Morris’s lawsuit.