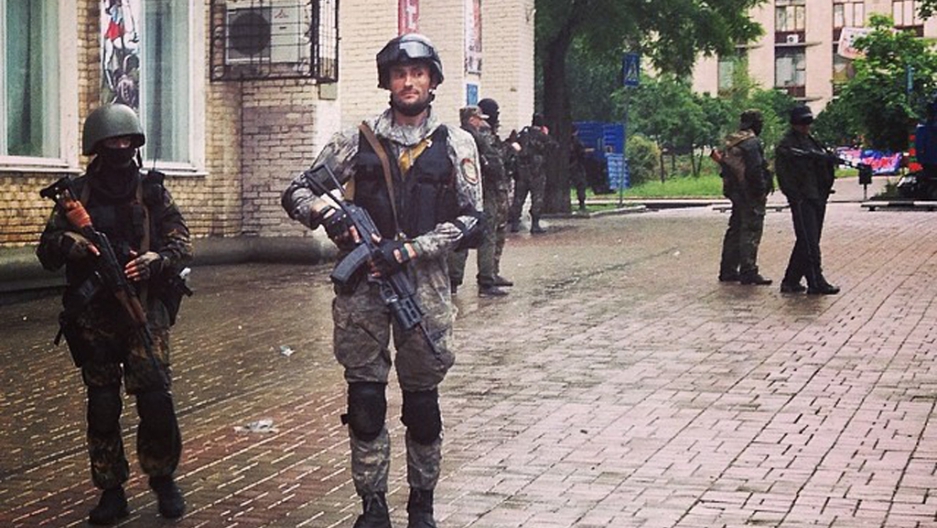 But last Friday, a day after a heavily armed, largely foreign fighting unit called the Vostok Battalion seized the premises and chased out many of its typically ragged inhabitants, few of the men at the door seemed to put up a fight.

That's probably because a day earlier, something of an elaborate show had kicked off, partly aimed at casting this diplomatic no-man’s-land in a more disciplined and orderly — if not exactly wholesome — light.

For weeks, the hulking administration building, its façade obscured by junkyard barricades of tires, wood planks and barbed wire, was home to the disenfranchised, largely blue-collar masses that’d driven the protest movement here.

Inside the Soviet-era monolith, the corridors were scattered with broken furniture and festooned with anti-Kyiv slogans and crude denouncements of both Ukrainian and Western leaders.

The repulsive stench of sweat and trash wafted throughout.

It was the separatists’ answer to the sprawling barricades and tent encampments of Maidan, the nerve center of the months-long anti-government protests in Kyiv.

But those days were apparently over.

On Thursday, the Vostok Battalion fighters appeared — masked and heavy weapons drawn — and cleared most of them out of the building within hours, a move leaders said was aimed at rooting out looters and other ruffians that had plagued their ranks.

That evening, rebel authorities invited journalists inside, offering what they said was proof of their former comrades’ misdeeds: reportedly, water bottles, cigarettes and small snacks, all looted from a local supermarket as the battle for the airport raged on nearby.

“It was apparent that there needed to be a firm crackdown,” said Alexander, a security guard for the rebel leadership, told GlobalPost during a visit to the building the following day.

No longer, he added, would it be acceptable for protesters to roam around in masks with baseball bats.

The building, Alexander went on, would now serve strictly as a government headquarters, not a hang out spot for unwashed protesters.

A sense of discipline and efficiency — as far as lawless quasi-states go, at least — was apparently descending on the “People's Republic of Donetsk.”

Rebel leaders, particularly Alexander Borodai, the “prime minister” of the republic, were forced to deny speculation that the building’s takeover by the Vostok Battalion — comprised mostly of fighters from around Russia, including Chechens — amounted to an armed power grab.

They instead pitched it as a “police operation.” Several Vostok members in plain clothes were spotted inside the administration building the day after the takeover.

Borodai, a Muscovite, appears in control of both the Vostok fighters —some of which serve as his bodyguards — and, increasingly, of the republic itself.

He cuts the image of a warlord, but one whose strategy and intentions are difficult to read.

One night earlier this week, as he dined with associates in a hotel restaurant chock full of Western reporters, his aide — a lanky and bearded man named Sergei — was dispatched across the room to extend reporters an offer few could’ve refused.

That was to accompany a rebel caravan as it escorted more than 30 dead Russian fighters, killed in last week’s botched attack on the airport here, from a local hospital morgue and across the border, to be buried on their motherland.

Not only was it the first open admission by the rebel leadership here that foreign fighters have played a key role in the insurgency, but it was a somewhat unusual display of openness much of the press hadn’t seen before.

Outside the morgue the following day, hordes of journalists flocked around the rows of red coffins that lay stacked on the lawn, unsure of the rebels’ game plan.

More from GlobalPost: There are definitely Russians fighting in eastern Ukraine

Meanwhile, Borodai and another top rebel leader, Denis Pushilin, made their rounds and fielded questions from the press.

But as time went on — at some point, a short-tempered thug threatened to shoot reporters who wouldn’t step away from the loading zone — a rumor briefly circulated that the bodies were actually already inside the coffins, sitting under the sweltering sun for at least an hour.

That was quickly debunked, however, after the fifth or sixth casket was loaded onto a white cargo truck. It was clear by the way the men were loading them — like one-handed, while talking on a cell phone — they were empty.

The bodies, it turns out, were actually being held at a rebel-controlled ice cream factory outside of town. Space at the morgue had apparently run out.

But amid the confusion, the rebel leaders spoke openly about their dead comrades’ Russian origins, while at least one living Vostok member spoke openly about how he’d traveled to Ukraine in order to help fend off the military’s “anti-terrorist” operation — even about the $100-per-week food allowance he received for it.

It was about this time that the Vostok Battalion staged its brazen siege on the administration building across town.

By the time the bodies were well on their way to the Russian border, the barricades around the building had begun coming down — and in full view of the media, most of which had rushed over to catch a glimpse rather than join the convoy many were uncertain would make it (it did).

To observers, it is becoming increasingly clear that the affairs of the “People’s Republic of Donetsk” are being closely choreographed while a new order, much different from the ragged protesters of the past, is settling in.

The problem is, no one quite knows yet who the show is for.

One thing, however, is certain: for many ordinary Ukrainians —unaccustomed to guerilla-style insurgencies raging in their front yard — it is anything but a spectacle.

Artyom, an 18-year-old university student in Donetsk, told GlobalPost that armed gunmen had stormed his dormitory building the same day as Vostok fighters commandeered the regional administration, demanding to see proof of the students’ registration there.

For Artyom, a first year philology student at a local university who asked that his name be changed for fears of his personal safety, the fear is nothing new.

An active pro-Ukraine protester, he was been beaten earlier this spring and even briefly kidnapped by pro-Russian thugs, allegedly for wearing a lapel pin featuring Ukraine’s coat of arms.

But the conflict has also hit home for him: on a recent evening, he was scouring the premises of the rebel headquarters searching for his father, who’d taken up arms behind the barricades.

Even before he’d lost contact with him — about two weeks ago — their relations were strained. Now, he says, despite their fundamental differences, he wants to find his father before fighting breaks out again in Donetsk.

“I never would’ve thought that this sort of situation could unfold in Ukraine,” he said.