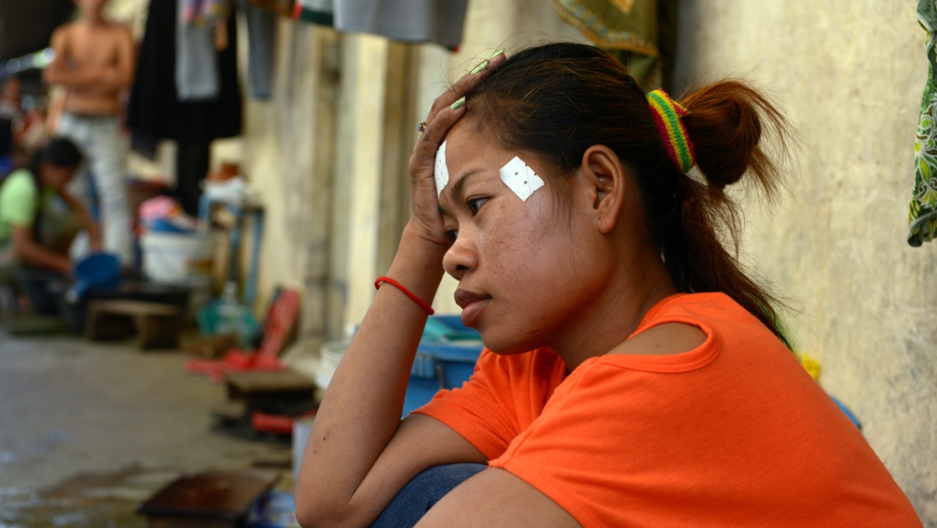 This photo taken on January 6, 2014 shows a Cambodian worker sitting in front of her room near a factory in Phnom Penh.
Credit: Tang Chhin Sothy
Share
PHNOM PENH, Cambodia — Three months pregnant at the time, Sam Ath doesn’t remember collapsing two months ago at the crowded, muggy garment factory where she works at the southwestern edge of the Cambodian capital.

The 30-year-old woke up in a hospital bed, only to be told that she had fainted alongside some 60 laborers earlier that day. One worker later died.

“I was so weak and exhausted,” she said. “I was uncertain why I fainted. The doctor said nothing about the fainting. My eating was OK.”

The incident, though unsettling, was hardly a big deal for her factory. Sam was quickly sent back to work stitching clothes for Western brands.

Collective swoons have become a regular part of garment industry life in Cambodia, which employs an estimated 400,000 people, mostly women, and is by far the country's biggest export earner.

Every few weeks, there's a mass fainting at a factory here. Some 500 people have already collapsed this year. More than 4,000 have dropped unconscious at work over the past four.

So regular are these incidents that one senior government official, Meng Mong, called mass faintings a “normal” part of the industry, even though he said the government is working with several local clinics to address them.

More from GlobalPost: The Cambodians who stitch your clothing keep fainting in droves

Cambodia was once en route to becoming a model for the industry, union activists and factory owners say. Ten years ago, international labor groups lauded Cambodia's participation in the pioneering Better Factories Program run by the UN's International Labor Organization. The project carries out spot inspections of factories covering more than a dozen “critical” issues such as the freedom to join unions and equipment safety.

In fact, floor conditions have overwhelmingly improved over the years — despite the waves of mass faintings caused by heat, chemicals used in the clothing, poor ventilation, lengthy commutes, and long hours, according to Sin Dine, a physician who treated 50 fainting garment workers on the outskirts of Phnom Penh in February.

Yet the success story has been dissolving as the industry has become more profitable.

A big part of that has been the rise of an SUV-driving, glitzy ruling elite enriched by foreign investment, who've spent the past decade piling up loot in offshore bank accounts. Those politically savvy crony networks with a stake in the garment business have used their considerable influence to curtail union rights, particular as workers have made calls for higher wages.

That became even more apparent on Friday, when the Phnom Penh Municipal Court convicted 25 unionists, garment workers and bystanders of aggravated violence, damage to public property, and insulting civil servants, among other charges. Most of the suspended two- to four-and-a-half-year sentences, with no jail time yet, stemmed from raucous demonstrations earlier in January, when workers took to the streets demanding better working conditions and a near-doubling of the national minimum wage to $154 a month.

More from GlobalPost: Cambodia factory collapse, how did inspectors miss it?

The nation's elites felt the financial pinch from that wave of street protests, and the authorities responded with a raft of crackdowns that have made protest harder than ever, lamented Chhorn Sokha, a labor specialist at the Cambodian Legal Education Community (CLEC), a non-profit that aids garment workers. The demonstrators were met last January by a duo of elite military units armed with guns and batons; the ensuing clashes left dozens injured and a handful killed.

“There has been no improvement in conditions. We have less freedom now to protest than we did 10 years ago,” Sokha said. “There's a need for the factory owners to make sure workers are kept in line.”

Labor leaders are similarly upset over provisions in a proposed trade union law that requires at least 20 percent of employees at a workplace to join a union for it to operate, and limiting each workplace to representation by one union. Critics say the law, if passed, will limit workers' options for collective bargaining.

Despite the presence of a few legitimate unions, Sokha said, dozens of groups neglect their members, choosing to collude with factory owners and local government offices. These so-called “unions,” she said, sometimes call off demonstrations in exchange for payments.

As long as Cambodia fails to tackle its corruption problem — the country frequently ranks near the bottom of Transparency International's annual rankings — and international organizations have little regulatory power beyond floor inspections, it’s unlikely workers will be able to unionize freely and work healthily, Sokha said.