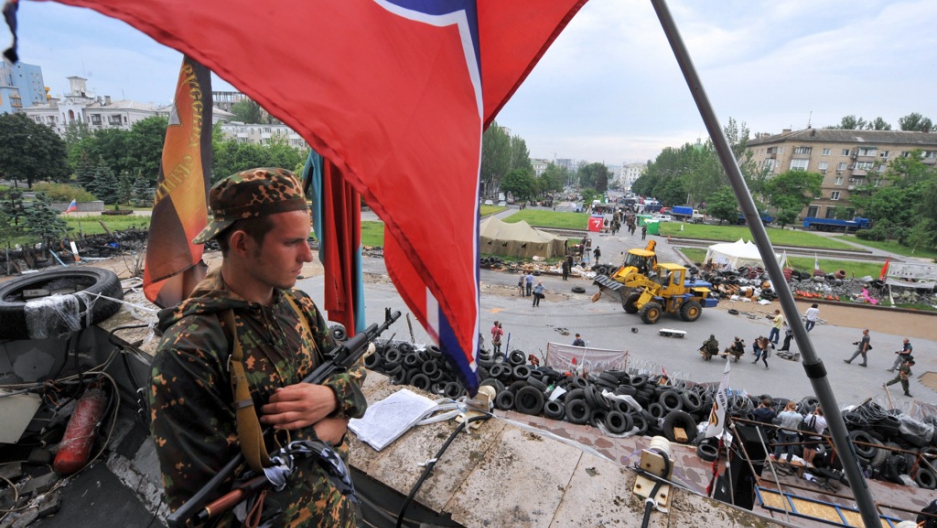 DONETSK, Ukraine — It was less like a subtle hint and more like a sledgehammer to the face.

As separatist rebels here loaded a large refrigerated truck with empty, red coffins outside a local morgue on Thursday, their leaders had a message: these are for Russians, and they’re going back home.

“They died, and we should compensate them with the highest honor,” said Alexander Borodai, prime minister of the self-declared “People’s Republic of Donetsk,” the unrecognized statelet that’s claimed authority in eastern Ukraine.

“I think that will be done on their motherland.”

It was the clearest sign yet that Russian fighters are playing a key role in the violent separatist insurgency here, and rebel leaders seem to be making no secret of the fact.

If earlier the only evidence of Russian citizens participating in the separatist rebellion came from accusations by Ukrainian officials and scattered media reports, then now it’s become common knowledge.

Coffins for 33 Russians killed fighting Ukraine military forces at Donetsk airport on Monday, which were set to be returned to Russia on Thursday.

On Tuesday, Donetsk Mayor Oleksandr Lukyanchenko said at least eight Russians were among the separatists wounded during fierce clashes with the Ukrainian military at the local airport on Monday, which separatist leaders claim killed more than 50 of their men.

Borodai told reporters on Thursday that among those, 33 were Russian citizens. Their bodies, apparently held in another location, were to be driven across the border in a convoy.

It remained unclear on Thursday evening whether they had actually made the voyage.

“These are people who came here to defend their brothers not for money, but for their own conscience,” Borodai said.

The revelation will likely put further pressure on Russia, which has consistently dismissed allegations by Ukraine and its Western allies that it’s orchestrating the separatist movement here.

There is virtually no hard evidence to prove that these fighters are acting on orders from the Kremlin, and they are clearly not regular troops. But it nevertheless challenges Moscow’s repeated assertions that the armed separatist insurgency is a homegrown protest movement.

Particular attention has turned to a unit of armed irregulars known as the Vostok Battalion, which captured headlines earlier this week after media reports identified its members as mostly Chechen fighters.

Members of Vostok Battalion, made up of irregulars and freelancers — many of whom are from Russia — in Donetsk.

Some of its fighters say the battalion is actually a special detachment that brings together units of people from both Russia and Ukraine.

“It’s a combined unit: there are Ossets, Russians, Ukrainians, and even people from Crimea have joined,” said a pro-Russian fighter who goes by the nom-de-guerre “Varan” (in Russian, “Monitor Lizard”) at the morgue on Thursday.

Varan, who said he’s a Russian citizen but declined to say from which region, claims he’s a volunteer who receives no pay except a $100 food allowance per week.

He also said he and many of his comrades were armed by local separatists — depending on their experience — after their arrival in Donetsk.

“If a person had experience as a hunter, he was given a sniper rifle,” said Varan. “I worked as a bodyguard, so I work with a pistol.”

The arrival of foreign fighters onto Ukrainian soil also raises the issue of the country’s dangerously porous border, where until recently tens of thousands of Russian troops had been deployed amid fears of an invasion.

Russian President Vladimir Putin had since ordered their withdrawal, and the fears have subsided.

But foreign fighters such as those from Vostok and other detachments apparently have little trouble seeping through — usually, Ukrainian officials allege, with weapons.

“Our border, especially in the Donetsk and Luhansk regions, has become a front line that various ‘terrorists’ are trying to break through,” Mykola Lytvyn, the head of Ukraine’s border service, told reporters in Kyiv on Wednesday.

“Daily fighting with ‘terrorists’ and groups of criminals near the Ukrainian and Russian border has become our routine reality.”

But if Thursday’s event in Donetsk was part spectacle — journalists had been initially invited to join the convoy — it also might have been a message.

The Kremlin has recently appeared to distance itself from the rebels here, refusing to recognize the May 11 independence referendum held by the anti-Kyiv officials in Donetsk and the neighboring Luhansk region.

Instead, Putin welcomed Ukraine’s May 25 presidential election, won by billionaire chocolate magnate Petro Poroshenko, as “a step in the right direction.” He later said he looked forward to working with Ukraine’s new leader.

Denis Pushilin, regarded as the leader of the “People’s Republic of Donetsk,” has repeatedly requested Russian troops to support his cause, most recently this week.

But his pleas for state forces have gone unanswered, illustrating Moscow’s disinterest in repeating the Crimean scenario — in which it seized, occupied and quickly annexed the Black Sea peninsula earlier this year — in eastern Ukraine.

More from GlobalPost: 3 things everyone should know about Ukraine

Some observers say the Kremlin is more inclined to continue stoking the separatist movement, while denying involvement, in order to keep Ukraine destabilized and firmly within its orbit.

Asked by GlobalPost on Thursday what he’d do if Russia fails to provide the crucial support he said the region needs, Pushilin said he would press on regardless.

“We are not going anywhere,” he said. “We will stay here and defend ourselves.”

He pointed to a recent rally in Donetsk, attended by around 300 coal miners, as a sign that local grievances are still strong here. That’s despite the fact that few residents, many recent polls have found, are keen on separating from Ukraine and joining Russia.

“I think that in the coming days the wave of protests against the actions of the Kyiv junta, including those of its oligarchs, will only grow,” Pushilin said, referring to the government’s “anti-terrorist” operation in the east aimed at weeding out separatists with support from big businessmen appointed as regional officials.

Yet Thursday’s coffin transport was overshadowed by another performance across town.

Members of the Vostok Battalion had seized the occupied regional administration building — the towering, barricaded rebel headquarters here — and chased out the scraggy demonstrators who have occupied it for nearly two months.

They claimed they were purging looters who’d ransacked a local supermarket near the airport during the assault on Monday, and cleaning up the premises.

But the style of the raid suggested that Vostok is attempting to reassert itself among the largely disheveled, undisciplined protesters who had occupied the building until now.

Masked and heavily armed gunmen — many sporting patches identifying them as Vostok fighters — guarded the perimeter and watched as tractors demolished the barricades of tires, wood and barbed wire.

On the building’s eastern side, a gaggle of pensioners looked on, and one elderly man asked: “Does this mean [the barricades] are no longer needed?"

A masked Vostok Battalion fighter, with an AK-47 slung over his shoulder, nodded and grinned.

“We’re going to make this city nice and beautiful again.”

Vostok Battalion fighters sit inside the regional headquarters they seized on Thursday.
Correction: Due to a spelling error, the pro-Russian fighter was misidentified as "Ram" (or "Baran" in Russian) in an earlier version of this story. He is in fact "Varan," which means "monitor lizard."