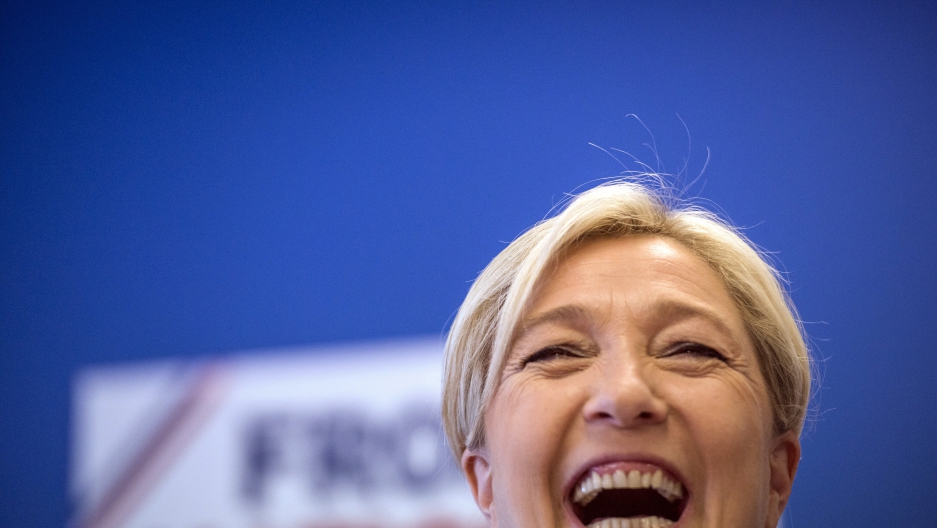 French far-right party National Front (FN) president Marine Le Pen smiles during a press conference at the party's headquarters on May 27, 2014 in Nanterre, outside Paris. France suffered what has been called a "political earthquake" on May 25 as the National Front topped the polls in European elections with an unprecedented haul of one in every four votes cast.
Credit: Fred Dufour
Share

The European Parliament election results saw unprecedented success for “anti-” parties of the left and, overwhelmingly, of the right.

Anti-Semitic, anti-Muslim. Anti-immigrant (in some cases, the same thing as being anti-Muslim). Xenophobic.

For weeks, Europe's main parties have been bracing for bad results. They got them. One third of the parliament is now made up of anti-EU parties — enough to make life difficult if not to force the EU into fundamental change.

The earthquake adjective, originating with French President Francois Hollande's reaction to the results, is most appropriate for France, where the National Front finished first with 25 percent of the vote. That is more than either of the two major parties in France's National Assembly, the Socialists and the Union for a Popular Movement (formerly led by Nicolas Sarkozy).

The NF has been around a very long time and has had occasional success but it has never come first in any national poll. Its victory is a tribute to the political skills of its leader, Marine Le Pen.

The decisive win is also a worry to those who know that the party was built on a platform of anti-Semitism and blatant racism by her father Jean-Marie Le Pen. The elder Le Pen was convicted of Holocaust denial under France’s Gayssot Act for saying, "I ask myself several questions. I'm not saying the gas chambers didn't exist. I haven't seen them myself. I haven't particularly studied the question. But I believe it's just a detail in the history of World War II.”

It wasn’t his only conviction for inciting hatred — in 2005 he was fined for remarks about Muslims.

But in the case of Marine Le Pen, the apple seems to have rolled a good distance from the tree. “Jean-Marie Le Pen is a child of World War II,” says Jean-Yves Camus. “Marine Le Pen was born in 1968, these issues mean nothing to her.”

Camus, a researcher at Paris think tank, IRIS, is the acknowledged expert on anti-Semitism in Europe. He has also studied extremist nationalism across the continent. In his view, “She is not a Holocaust denier.”

Marine Le Pen, says Camus, is a politician intent on power. Her father’s pugnaciously expressed racism and xenophobia is not the way to government. Anti-EU campaigning, and relentless attacks on the entrenched and self-regarding elites of the traditional parties, is the way for her group to garner the votes that now make her a plausible candidate for France’s presidency when elections are held in 2017.

Something similar to the National Front's success has happened in the UK where the deeply euroskeptic UKIP led by Nigel Farage, won the election outright ahead of Labour and the Conservatives. Farage managed to reposition his party away from the racist British National Party and it is seen as a purely populist party.

Le Pen’s successful repositioning of the National Front as a populist, not a racist party, capable of winning major elections is an example to the two parties Camus says are neo-Nazi: Greece's Golden Dawn and Hungary's Jobbik.

Greece’s Golden Dawn tried to tone down its rhetoric and embrace mainstream politics in this campaign, a matter of self-preservation. Its leader Nikos Michaloliakos is currently in prison, accused of being a member of a criminal gang.

The faces of Golden Dawn support in this campaign included former top civil servants and senior military officers - including two generals who served assignments with NATO. But its spokesman is Ilias Kasidiaris, who famously has a swastika tattooed on his upper arm.

The party’s anti-Semitism is not outrageous in the Greek context. Greece is a country where anti-Semitism is generally an open sentiment. In the Anti-Defamation League’s recent global survey of attitudes to Jews, 69 percent of Greeks harbored anti-Jewish views, the highest level in Europe.

Eighty-two percent of Greeks surveyed said it was “probably true” that Jews have too much power in international financial markets. When the “international financial markets” lost confidence in Greece’s ability to repay its debts in 2011, a catastrophic series of events was set in motion that led to the fall of the PASOK government and a bailout of the country under exceptionally harsh terms that effectively condemned the country to Depression-style economic contraction.

Unemployment in Greece remains around 26-28 percent, and resentment of the “troika” which includes the International Monetary Fund and those who speculate in the bond markets has put international finance front and center in Greek minds.

Golden Dawn took almost 10 percent of the vote and was rewarded with parliamentary seats.

Hungary’s Jobbik, will also have three seats, the same as it did after the last vote in 2009.

Despite their efforts to present a modern face to the wider world, they haven’t impressed Marine Le Pen. The National Front leader announced Tuesday that she would seek to form a voting bloc of right-wing parties in the new parliament, but pointedly said that Golden Dawn and Jobbik were not invited to join.

It is difficult to draw a simple conclusion from the results of these elections. At one level they continue a trend going back to 2011 and the eurozone crisis. Incumbents — with the notable exception of Angela Merkel — have been thrown out of power in national elections. In this election the overwhelming theme has been voters giving their main political parties another good kicking.

But why does that mean a significant minority turn to parties whose rhetoric and symbols are either outright neo-Nazi as in the case of Golden Dawn, or hark back to militias that aided and abetted the Nazis, in the case of Jobbik?

In a continent which has virtually no Jews left, why does contemporary nationalism still use anti-Semitic tropes?

The problem for pro-Europeans is that the EU symbolizes a redefinition of what it means to be a nation. It is an attempt - not expressly stated - to create a federal system out of sovereign nation states.

This is a tough sell when the era of globalized capital seems to be visiting ruin on previously prosperous, sovereign countries.

On Tuesday Marine Le Pen demanded three things of French President Hollande, all related to globalization: “Firstly, France halts the transatlantic treaty [with the US]; secondly, France states its veto of Turkey's entry into the European Union and, thirdly, he nationalizes Alstom, (a french conglomerate that builds the TGV high-speed train) contrary to the rules of the European Union, to save this strategic company."

It is this desire to pull up the drawbridge on globalization that underlines so much politics across Europe now (and the US)?

Nativists and nationalists are coming out of the woodwork and the language they use to connect with voters is an old one. Jews are internationalists. They are more loyal to their tribe and Israel than to the countries where they were born. The new parties speak of Muslim immigrants as a fifth column trying to establish the caliphate in Europe. Immigrants from Africa, the Middle East, Asia are all taking jobs away from hard-working “indigenous” people.

Fear and hatred is an easier sell for parties trying to make a mark. If they last long enough, like the National Front, then perhaps they will migrate towards the kind of legitimacy Marine Le Pen is leading her father’s party towards.