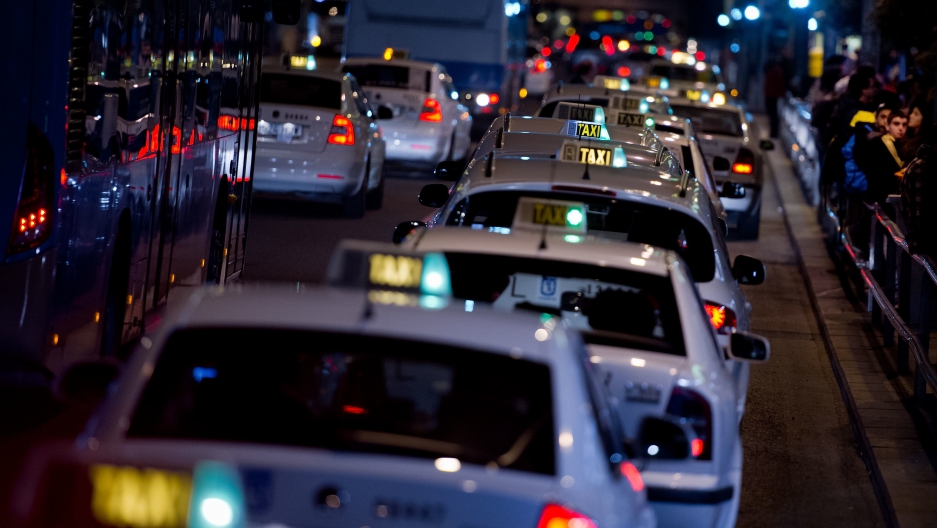 BARCELONA, Spain — The meeting place is usually central, near a metro station or McDonalds, somewhere a car can easily pull up and park. The driver greets his passenger with a kiss on each cheek as is customary throughout Spain, although the pair have almost certainly never met before.

Then it’s time to hit the road with the motley collection of other strangers who also want to get from point A to B for the cheapest price possible.

The formula is simple: passengers share the cost of gasoline and tolls to save money. Taking car sharing website BlaBlaCar’s most popular route, the 220-miles between Madrid and Valencia, costs around $23 — $12 less than by bus.

But the days of hitching a ride via such websites or renting apartments through online sites such as Airbnb could be numbered in Spain.

The global debate over the legality of so-called “collaborative consumption” websites is especially fierce here, where a long-running economic crisis and high 25.93 percent unemployment rate has fuelled phenomenal growth in the cheaper deals and extra income such sites can offer.

BlaBlaCar has grown three times faster in Spain than in the other 12 countries in which it operates, and 85 percent of its customers use the site to save money.

That expansion has prompted protests from taxi and bus drivers who argue they’re being priced out of the market by unprofessional drivers.

Apartment-sharing sites like Airbnb are facing a similar backlash from traditional markets amid concerns property owners are dodging taxes on their earnings, adding to an already strong under-the-table culture in Spain.

In February, Madrid’s Business Hotel Association attacked such platforms as illegal and several Spanish provinces are reviewing their laws.

Airbnb is no stranger to such controversies — subletting via the site was declared illegal last year in both New York and Berlin.

But outlawing such sites may do little to curb their reach in Spain, says Alex Barrera, chief of the Madrid-based start-up communication company Press42. “No matter how many laws they apply, people will still do the same thing,” he says. “Spain is one of the most regulated countries, but one of the few where no one actually follows all those rules.”

The Spanish government has already backed down over moves to cap crowdfunding, after floating draft laws in late February that proposed profit limits of $4,100 per person per project and an $8,200-a-year donation ceiling per crowdfunding platform. The draft also applies to equity-based crowdfunding, in which entrepreneurs promise equity in their company to investors.

Although the government insisted it was trying to protect investors from potential losses, the draft law was roundly criticised as “killing equity crowdfunding” in Spain.

“The government is so scared of what happened with the real estate bubble and having people with no resources accessing huge mortgages and then losing everything. They don’t want to repeat that, so they tried to build some safeguards into this,” Barrera says of the draft law.

“But if you limit a project in this way, the number of people you need to get involved to raise enough money to make it feasible — well, there’s not enough people in the country to do that.”

Economy Minister Luis de Guindos, who once described crowdfunding as “completely unregulated” in Spain, backpedalled this month, announcing the cap would apply only to non-professional investors with annual incomes or wealth of less than $137,000.

The concession came amid lobbying from Spanish start-ups, including The Crowd Angel, which suspended its activities after the draft’s release. CEO Ramon Salter says the site’s average contributions are $16,400 and that blanket-enforcing a donation cap would make it nearly impossible to finance major projects of $200,000 or more.

Still, concerns remain about other sections of the law. Restrictions on marketing, according to which platforms advertising their projects beyond their own portals could face fines of up to $274,000, threaten to stifle the industry, says Enrique Estelles, crowdsourcing researcher at the Catholic University of Valencia.

“I think this is a mistake because marketing and social networking is really important,” he says. “If it’s approved in this way, equity crowdfunding won’t reach its potential in helping the Spanish economic recovery.”

Many agree that crowdfunding alone isn’t the solution to the Spain’s economic woes, which were prompted by the 2008 bursting of a housing bubble that left banks laden with bad debt.

But the country remains in the grip of a credit crunch that stretches back to 2009, and which intensified in 2012 and 2013. That, says Benoit Vandevivere, Spain ambassador for the European Crowdfunding Network, has created a “dire need” for alternative forms of finance and has fuelled the growth of crowdfunding.

A study released last year found crowdfunding in Spain attracted more than $590 million across 2800 projects in 2012 alone. That created 7500 direct “crowd-jobs,” mainly in the cultural and entertainment sectors.

“A lot of small businesses have financing issues, so there is huge demand and a willingness to use alternative finance methods,” Vandevivere says. “But Spanish governments look at crowdfunding as a threat instead of an opportunity. That’s very unfortunate because history has shown that if players embrace innovation, they tend to win.”