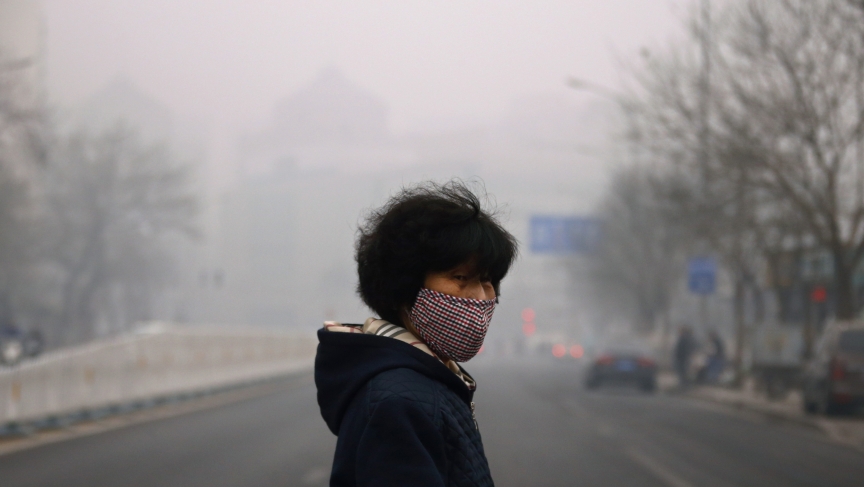 A woman wearing a mask walks across a street during a hazy day in Beijing on March 27, 2014. China's plan for a market in air pollution permits promises to help clean up its air cheaply, but the move could prove just as useless as previous environmental policies unless the government stamps out lax enforcement and spotty data.

China is taking five million cars off its roads in 2014, an effort to catch up to its pollution targets. The country has already failed to meet their standards for air quality from 2011 to 2013.

In a policy document published Monday, the Chinese government declared millions of cars would be "decomissioned" in an effort to improve air quality, including 330,000 cars in Beijing. This announcement comes only weeks after the World Health Organization announced that air quality was deteriorating in cities around the world, and blamed as many as seven million 2012 deaths on air pollution exposure.

We put together this slideshow of cities around the world affected by smog incidents in the recent past.

Over the weekend, the Shanghai government warned children and the elderly to stay inside as a thick layer of smog descended upon the city. Air quality levels were seven times what the World Health Organization recommends for daily exposure. On December 6 last year, Shanghai reached the highest level on the air pollution scale, leading to a 30 percent increase in patients visiting respiratory departments, according to Shanghai’s health department. China’s Ministry of Environmental Protection blamed the smog on pollutants caused by adverse weather, vehicle emissions and coal-fired pollution. These photos, taken by Davin Tarr 11 days apart in November 2013, look east on Shanghai Centre in Jing’an on West Nanjing Road.

On the left is the view of Ulaanbaatar on June 25, 2009. On the right, a view of a smog-filled Ulaanbaatar from the Zaisan Memorial, taken on December 3, 2010. (Photos: Brücke-Osteuropa, Einar Fredriksen/Flickr)

In the capital city of Mongolia, 60 to 70 percent of winter pollution comes from coal and wood-burning stoves. The WHO says the annual average particulate matter concentrations in the city are 14 times higher than the recommended level, causing high incidence levels of bronchitis and cardiovascular diseases among the city population. In fact, researchers believe that one in every 10 deaths in the city is caused by air pollution.

On the left, the Torre Mayor skyscraper and the rest of the Distrito Federal in Mexico City on July 23, 2013. On the right, buildings stand shrouded in smog during early morning in Mexico City, on September 14, 2012. (Photos: Lidia Lopez/Flickr,REUTERS/Henry Romero)

Since the UN’s declaration that Mexican City was the most polluted city on Earth in 1992, the city has drastically cut CO2 emissions and air pollution, even winning a prize from the C40 Cities Climate Leadership Group in September for its improvements. Even still, Mexico City produces 150 percent of the ozone contamination recommended by the WHO, according to the 2012 report from the International Clean Air Institute.

Two photos taken in the same location in Beijing in August 2005. The photograph on the left was taken after it had rained for two days. The right photograph shows smog covering Beijing on what would otherwise be a sunny day. (Photos: Bobak Ha'Eri)

In January, Beijing made headlines when an air-quality reading of 755 “broke” the charts. The air quality index before then had gone up to 500. In the months since, schools have been forced to close and city events have been cancelled because of smog. Photos of smog coming out of Beijing are indicative of the problem that plagues China as a whole, where an estimated 1.2 million people in 2010 died of complications from air pollution. On December 12, 2013, Chinese aviation authorities announced new training in low-visibility landings for domestic pilots, to combat rampant flight delays caused by smog at Beijing’s international airport.

On the left is a black and white photo of Kremikovtzi AD (Кремиковци АД), Bulgaria's largest metalworking plant. The photo to the right is a general view of Kremikovtzi, near the capital Sofia, on October 20, 2008. In May 2009, the plant shut down after being placed in receivership and going bankrupt. (Photos: Slobodan Miskovic, REUTERS/Oleg Popov)

In a report released on October 15, 2013 by the European Environment Agency, Bulgaria ranked the highest in daily limit value of particulate matter, which can cause cardiovascular and lung disease. In November, a Greenpeace report claimed that over 2,000 people in Bulgaria died prematurely due to air pollution from thermal power plants.

This metalworking plant, Kremikovtzi AD, sits near Sofia, Bulgaria’s capital. In March 2008, Bulgaria’s Group of Civil Environmental Organizations demanded the plant be shutdown because of air pollution and land contamination. The organization claimed that pollution levels exceeded by 60 to 80 times what was allowed at the coke ovens and the dust in the coal ovens was 143 times greater than allowed. The plant went bankrupt in late 2008, and stopped production of coke and metals in 2009.

Bakersfield, a city in California’s San Joaquin Valley, recorded the highest level of airborne pollutants of any US city in 2008. In April 2013, it was ranked #1 in short term and annual particle pollution and third in ozone pollution by the American Lung Association. Above are two photos comparing a clear day in Bakersfield to one dense with smog.