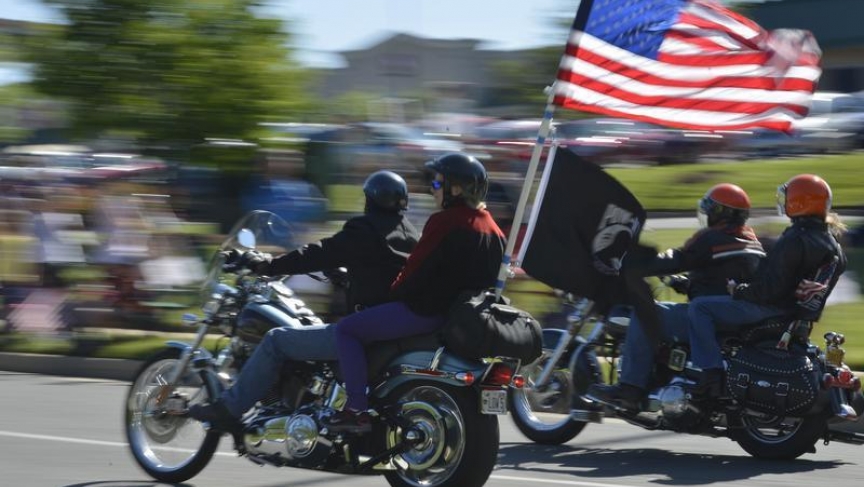 Motorcycle riders fly the American flag as they ride with hundreds of thousands of fellow motorcyclists in a Fairfax, Virginia, gathering on Memorial Day weekend for the 26th Annual Rolling Thunder Rally to remember POWs and MIAs from America's wars, in Washington, May 26, 2013.

You may have seen or heard a pack of motorcycles driving by your house this Memorial Day weekend. It's become an annual rite among many groups of military veterans.

And every year for the past 27 years, thousands of motorcycle riding vets have traveled to Washington, DC, on the Sunday before Memorial Day for the annual Rolling Thunder motorcycle rally Artie Muller, a Vietnam vet who helps organize the event, rode his 1992 Harley Davidson Low Rider from New Jersey to DC again this year for Sunday's rally.

Monday, he says, is a quiet day for reflection at the National Vietnam Memorial.

"First we come down to the Wall. We pay our respects to a lot of our brothers that we lost over there. A lot of us made it back and a lot of us didn't. I have a lot of brothers on the Wall and I like to come to the Wall, say a few prayers, and pay respects to those that didn't make it back here," he explains.

"I'm lucky I made it home alive. We all have problems. We did what we had to do, we served our country, our government asked us to fight a war, we fought it. Most of us would probably go back again if we were younger and do it again — if we had to."

The Rolling Thunder organization's primary aim with its rally is to publicize the issue of prisoners of war and those still listed as missing in action. "To educate the public that many American Prisoners of War were left behind after all previous wars, and to help correct the past and to protect future veterans from being left behind should they become Prisoners Of War-Missing In Action. We are also committed to helping American veterans from all wars."

All across the country, there are motorcycle rallies to raise awareness for wounded veterans, and missing servicemen. Muller says the rally started as a march and motorcycle rally, but soon organizers realized it was the sound of motorcycles that attracted the most attention and curiosity.

The first Rolling Thunder rally was in 1988 with 2,500 riders. It’s still going strong. Muller says close to a million people, including veterans, their families and supporters, turned out and lined the streets for the Washington rally on Sunday. Participants have called for a full accounting of POW/MIA servicemen from World War II, Korea, Vietnam, Iraq and Afghanistan who are listed by the Pentagon as captured or missing.

Muller says Rolling Thunder will continue to press its case. "Whatever happened to the men who were left behind, still alive, after all past wars? Research teams still search for bones, but nothing is being done to resolve what happened to those left behind alive! Sgt. Bowe R. Bergdahl, captured June 30, 2009 in Afghanistan, is still missing. Although talks have ceased at this time, what is the government doing to bring him home?"

Muller says unfortunately, many Americans don't stop for even a moment on Memorial Day to remember those who have fallen. "Most Americans think Memorial Day is a day that we can go to a store to get something on sale, or go have a barbecue in the yard or go down to the shore and go swimming. But it would be nice if all the Americans in this country would think about just for a little bit each Memorial Day, why we have Memorial Day, and that so many sacrificed their lives, through all past wars. This is not just about Vietnam."

In the past 27 years, Muller says Rolling Thunder has lobbied the US government to recover, identify, and bury the remains of 1,151 servicemen.

Artie Muller, one of the founders of Rolling Thunder National, he's dedicated his life to bringing fallen heroes home pic.twitter.com/oN0CtZ8PDU