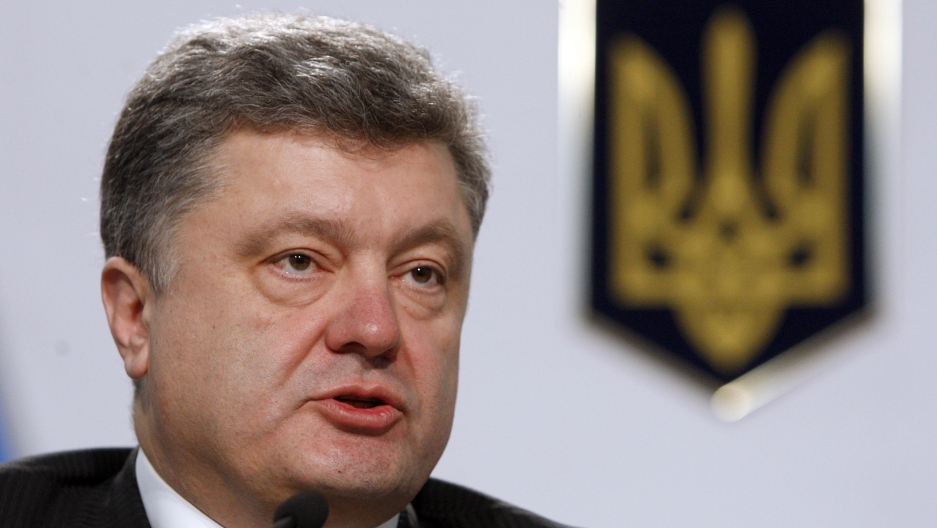 Despite the enthusiasm for Poroshenko, most Ukrainians are realistic about the uphill battle for stability their country faces.
Credit: Anatoliy Stepanov
Share

KYIV, Ukraine — Never mind that Petro Poroshenko is a billionaire in the land of murky crony capitalism.

Or that he once served in ousted President Viktor Yanukovych’s administration. Or that he was previously closely allied with the disgraced Orange Revolution-era coalition remembered for its stalled reforms and political infighting.

Whatever hang-ups lurk in the 48-year-old confectionary magnate’s past haven’t stopped his meteoric rise in popularity nor dampened expectations that he will sweep the first round of Ukraine’s presidential election on Sunday.

Experts say he’s a smooth political operator who’s played his cards well — and that his presidency may be about as good as it gets in this country’s tainted political landscape.

“If you take any one of the well-known politicians, you’ll find they all have a history,” says Iryna Bekeshkina, a political sociologist and director of the Kyiv-based Democratic Initiatives Foundation.

“They’re not ideal, but voters choose based on whatever they’re offered.”

Despite his trading of allegiances during 15 years in politics, Poroshenko has managed to maneuver his way around controversy.

The deft businessman earned widespread respect from many Ukrainians during the months-long revolution on Kyiv’s Independence Square — the “Maidan” — after publicly supporting the uprising and even standing shoulder-to-shoulder with protesters.

That contrasted with the standoffishness most of the country’s powerful oligarchs typically exhibit, preferring to work in the shadows.

A fresh opinion poll released Wednesday by Bekeshkina’s Democratic Initiatives Foundation found that nearly 45 percent of decided voters — about 60 percent of the electorate — will pick Poroshenko, nicknamed the “Chocolate King.”

Former Prime Minister Yulia Tymoshenko trails far behind in second place with only 8 percent. Once one of Ukraine’s most popular politicians, she’s attracted suspicion for her high-profile political infighting in recent years and reputation for corruption.

Observers say that Poroshenko, who was born in southern Ukraine but raised in a central region, fits the bill for a post-revolutionary president.

He’s also known for the kind of pragmatic deal-making that’s allowed him to grow his respected Roshen confectionary conglomerate — even in Russia, at least until one of his main factories was shuttered by Moscow last year amid a trade dispute — and to shift around politically with relatively few consequences.

But his record is not untarnished.

Poroshenko was closely tied to the administration of former President Viktor Yushchenko, who rose to power after the ultimately failed Orange Revolution in 2004 but quickly squandered his mandate after squabbling with Tymoshenko, his former ally.

That set the stage for widespread disenchantment with almost any politician connected to the so-called Orange elites.

More recently, Poroshenko served nearly a year as Yanukovych’s minister of economics and trade, which has prompted some Maidan activists to call for his removal from politics altogether.

He also still owns Channel 5, one of Ukraine’s most trusted TV networks, which some critics say he uses as a political vehicle. And while he’s pledged to sell his candy empire, he’s shown no signs he’d give up his media asset.

That irks some of Ukraine’s watchdogs, including Serhiy Leshchenko, a top investigative journalist who detailed some of Poroshenko’s murky political past — particularly during his short stint as Yushchenko’s powerful National Security Council chief — in a report released Friday.

Leshchenko argues that a future under the Chocolate King could go one of two very different ways.

“Poroshenko at Ukraine’s helm could become an example of how public figures are able to change,” he wrote in the independent outlet Ukrayinska Pravda. “But just the same, his presidency could become a catastrophe that can ruin an entire generation’s hopes of destroying the oligarchic, post-Soviet sarcophagus that has encased Ukraine.”

“The choice of which path to take depends of many surrounding factors, but most of all on Poroshenko himself,” he added.

Other experts, such as Oleksiy Haran, a professor at the Kyiv Mohyla Academy, agree that Poroshenko will need to distance himself from business interests.

But he adds that the billionaire has so far proven capable of sidestepping other blotches on his resume.

For instance, his time serving Yanukovych, universally hated since having ditched a sweeping political and trade deal with the European Union last fall and ordering the deadly crackdown on the Maidan protests that his decision prompted.

“Right now, he’s able to say, ‘I took part in developing the agreement with the European Union,’” Haran says.

If elected, Poroshenko will have his plate full.

He faces the violent separatist insurgency still raging in eastern Ukraine, which claimed more than a dozen pro-government troops in deadly assaults during the past two days alone.

He’ll also need to find a way to bridge Ukraine’s formidable ethnic and cultural divides, exacerbated in recent months by propaganda and negative media campaigns from both sides, Russian and Ukrainian.

But the most important issue is the economy. The Democratic Initiatives poll found that 52 percent of Poroshenko supporters say they’re sticking with the oligarch because they believe he can help boost the economy.

Such hopes may be misplaced since parliament reverted to an older version of the constitution earlier this year that grants more power to the legislature and cabinet.

While the president will still guide national security and foreign policy, the government and prime minister will answer for the economy.

More from GlobalPost: Violence plagues Ukraine ahead of election

Nevertheless, many voters continue to look to his candy empire, Roshen, which they see as a well-run business far more wholesome and efficient than the gas-trading schemes and privatization scams that enriched Tymoshenko and most other Ukrainian oligarchs.

“Poroshenko is a competent individual, and you can even judge him by his business: there are probably no sweeter candies in the world than his,” chuckled 58-year-old Kyiv resident Natalia Stelmakh.

Despite the surge in enthusiasm for Poroshenko, observers say most voters are realistic about the uphill battle for stability the country faces.

“Back then, optimism dominated, but today pessimism rules.”