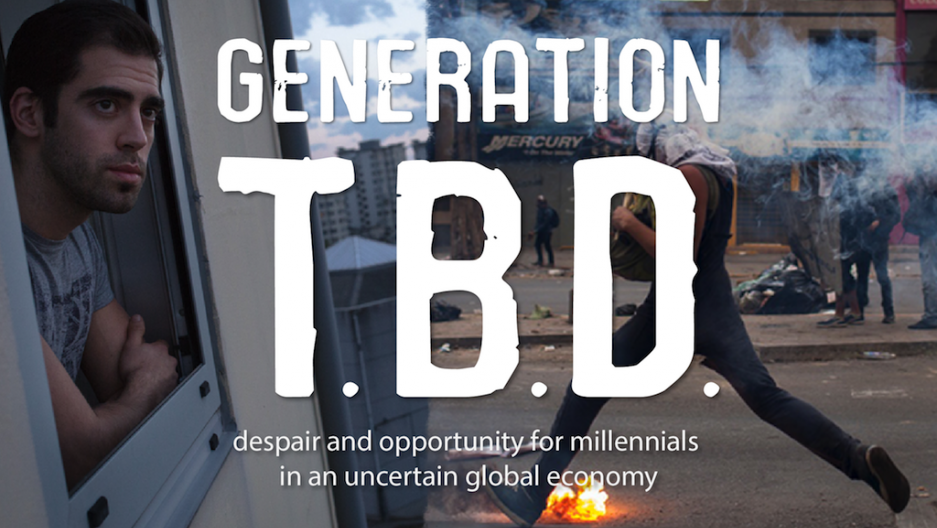 Editor’s note: On Wednesday, May 28, The GroundTruth Project launched a Special Report on the global youth unemployment crisis, “Generation TBD,” with a multimedia dispatch from the streets of Brazil. It's part of a GroundTruth reporting fellowship featuring 21 correspondents reporting in 11 countries, part of a year-long effort that brings together media, technology, education and humanitarian partners for an authoritative exploration of the problem and possible solutions.

BOSTON — Take one look at youth unemployment numbers around the world and they resemble a catastrophe in the making. Talk to young people in just about any country and the story gets real. It's sometimes hopeful, sometimes mundane and often tragic.

Welcome to the reality of Generation TBD, a group of millennials for whom the prospects of a sustainable future — a career, a home, perhaps a family — are “to be determined.” As our reporting has found, an estimated 290 million people ages 15-24 are not employed or enrolled in an educational program. This demographic is three times as likely to be unemployed as adults, according to the International Labor Organization. In other words, 40 percent of the world’s unemployed are under the age of 25.

They are the young Brits who told researchers at Prince Charles’ Trust last year they “had nothing to live for” and had contemplated suicide because they’ve been unemployed for so long.

They are the young Brazilians who mobilized to boycott the World Cup, accusing the government of using precious funds to host the world rather than create sufficient opportunities for the country’s residents.

They are the young Spaniards known by the Spanish-language shorthand “NiNis” because they’re neither working nor in school in a country with a youth unemployment rate above 50 percent.

They are the young Nigerians who felt like a “kidnapped generation” long before Boko Haram abducted 270 schoolgirls in April before a nonchalant government was shamed on the world stage by the #BringBackOurGirls campaign.

They are the young Egyptians who are building startups out in the desert, defying a sinking economy in an increasingly authoritarian political climate.

And they are the young Americans living in the country’s former industrial heartland including Ohio and New York where jobs are now so scarce that one Buffalo resident said, “You don’t have to go to Detroit to get Detroit.”

If 2013 was the year the world woke up to rapidly rising inequality, 2014 is the year the world has begun to realize that a large piece of the millennial generation simply doesn’t fit into the existing global economy. That’s why, the numbers show, the youth unemployment crisis is not limited to any particular country or region. It is no kinder to ‘developed’ nations than to ‘developing’ ones. Catastrophic levels of youth unemployment have emerged since the global economic downturn began in 2008 as a sort of plague on a “lost generation,” with powerful implications for the planet.

“Youth unemployment creates an additional cost burden for taxpayers in the form of lost revenues, the need for government-provided health care, increased crime, and additional welfare payments," according to the Center for American Progress’ report “The High Cost of Youth Unemployment” from April 2013. "Researchers estimate that the fiscal cost of the 6.7 million Americans ages 16–24 who are neither working nor attending school is $1.6 trillion over their lifetimes.”

Like all of the world’s most vexing problems, youth unemployment has persistent structural causes.

The World Economic Forum, which focused on the problem at its gathering in Davos in January, has emphasized the need for an entrepreneurial, “collective approach” to the problem to better match open positions with potential employees with required skills, providing training and mentorship programs to those who might be otherwise unemployable.

“We’re trying to bring more entrepreneurs to the table,” said Maria Fanjul, chief executive officer of Entradas.com in Spain, “to encourage young people to be owners of their lives.”

And the European Union has committed to an initiative that “seeks to ensure that member states offer all young people up to age 25 a quality job, continued education, an apprenticeship or a traineeship within four months of leaving formal education or becoming unemployed.”

President Obama’s administration has pledged to help reform the US education system to alleviate the problem.

“We’re working to redesign high schools and partner them with colleges and employers that offer the real-world education and hands-on training that can lead directly to a job and career,” Obama said in his State of the Union address in January.

Pope Francis has called youth unemployment “the most serious of the evils that afflict the world these days,” attempting to a bring a moral authority to the problem as part of his relentless critique of global capitalism and the inequality embedded within the system.

But as GlobalPost has reported extensively, the economic rebound from the Great Recession has been highly concentrated among the wealthiest cross-section of earners.

So often, the jobs (at least the good ones) just don’t exist anymore as technology renders positions obsolete, wealth concentrates at the moneyed peak of society and large companies have little reason — moral or otherwise — to open their war chests to hire more people.

As London-based economist Umair Haque, a frequent contributor to the Harvard Business Review, wrote in January, “So let’s call it what it is. Not just unfair — but unconscionable. The world’s so-called leaders have more or less abandoned this generation.”

For some in Generation TBD, the present day is indeed a time of entrepreneurship, opportunity and success. For many, it is a time of stinging, eventually numbing frustration. And for the 290 million millennials who are not employed and are not being educated, the buildup of frustration is immense.

GroundTruth will continue to publish stories about Generation TBD through October with support from the Ford Foundation, leading up to an authoritative conference at the International House in New York City on October 24.

And on Tumblr here.