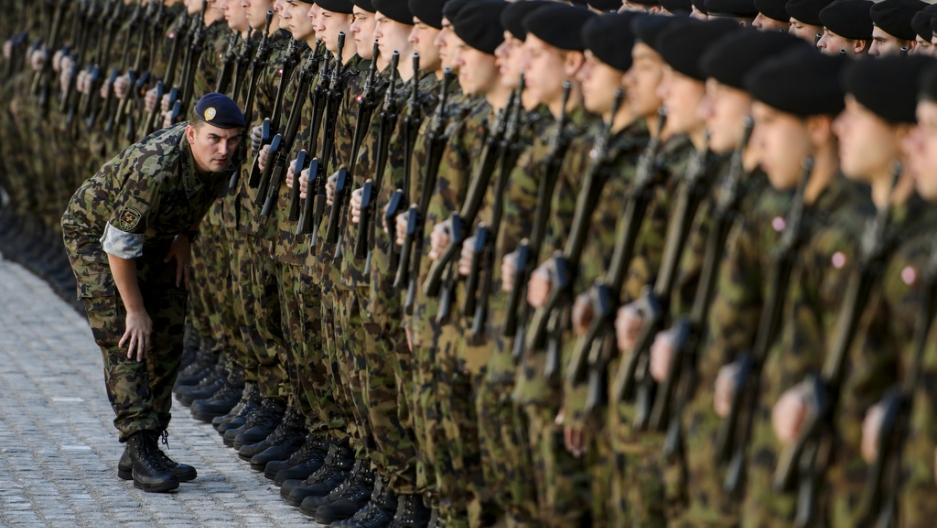 This photo taken on May 20, 2014, shows a Swiss army officer checking a Swiss honor guard ahead of the arrival of Italian President Giorgio Napolitano in Bern.
Share

Sweden and Switzerland have a global reputation for being peace-loving countries.

So it seems counterintuitive that they are also the third and fifth biggest arms suppliers per capita in the world, according to data from the Stockholm International Peace Research Institute and the World Bank.

Israel ranks No. 1, followed by Russia. Belarus is in fourth place.

Sweden and Switzerland have long maintained neutral positions in international conflicts, preferring instead to offer assistance through peacekeeping missions and foreign aid.

Yet they appear to have no qualms sending their military equipment to regimes accused of human rights abuses.

This photo taken on May 25, 2007, shows a Swedish peacekeeper in Kosovo.

The equipment ranged from anti-aircraft guns and naval weapons to planes.

"Swedes see themselves as very ethical and restrictive when it comes to giving human rights violators or dictators things that help them stay in power. But the reality is that has happened," Siemon Wezeman, an arms expert at SIPRI, told AFP.

"In the last decade or so they've been more open to it, because those are the markets.

"In the past they wouldn't have done business with Saudi Arabia due to human rights concerns — it's obviously a place that rings all kinds of alarm bells — but that has changed ... They've sold them Eriye (radar tracking systems) and anti-tank missiles and marketed other weapons there."

And even if Switzerland and Sweden tried to take precautions to ensure their weapons were not used against civilians, in reality there’s very little they can do to stop that from happening.

"It's illusive to believe that Swiss authorities are able to control whether exported Swiss weapons and ammunition are used for human rights abuses," Stefan Dietiker, secretary general of pacifist Group for Switzerland without an Army, told the Inter Press Service.

"Once they've left our country, they're gone, no matter how many clauses the purchasers sign and how many promises they make."

The total value of military equipment exported by Sweden and Switzerland last year was dwarfed by that of Russia, the United States and China, which were the top three arms exporters, according to SIPRI.

But they still ranked among the top 20 suppliers. Here's the full list.