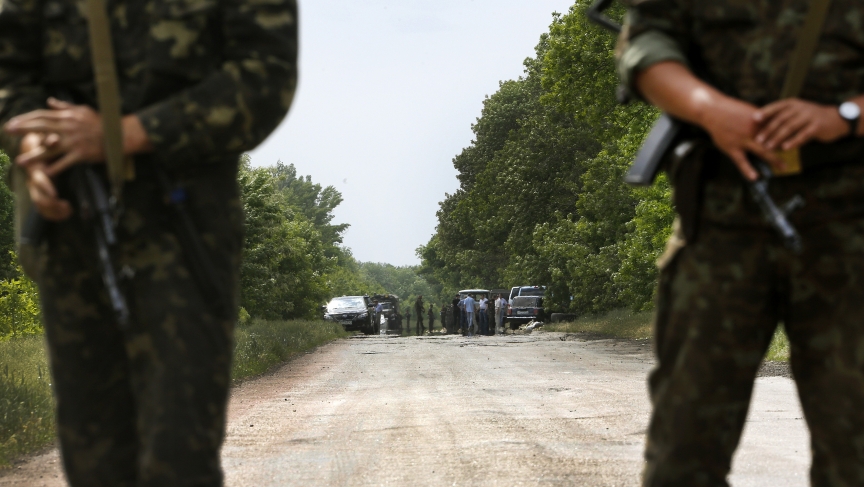 Ukrainian soldiers secured an area near the site where pro-Russian rebels killed at least 13 Ukrainian servicemen in the outskirts of the eastern Ukrainian town of Volnovakha, May 22, 2014. The clash, one of several overnight in the region, came three days before Ukrainians vote in a presidential election billed as the most crucial since the country gained independence from Moscow in 1991.

The stakes are high in Ukraine ahead of elections planned for this weekend. Smooth voting could be a boost for the Ukrainian government in its struggle with pro-Russian separatists.

Things were far from smooth today, though.

This morning, separatists killed at least fourteen Ukrainian soldiers in the rural town of Volnovakha, says BuzzFeed's Max Seddon, who is in Donetsk. The militants attacked a Ukrainian army reservist checkpoint that Seddon says it is basically in the middle of nowhere.

“As has increasingly been the case in eastern Ukraine — where neither side has been able to tip the balance of power militarily — you occasionally get these nasty periods of violence,” he says. It's the bloodiest attack yet for government troops.

The attacks appear to be growing in frequency. So much so that some people are even shaping their daily routines around the fights. Depending on their loyalty, people will often bring food to the separatists or the Ukrainian army, "neither of them have enough supplies,” Seddon says. "Some people will go and protest against whichever side it is that they happen to disagree with."

In Kramatorsk, Seddon says, a group of separatists were driven away by a group of angry grandmothers who came and yelled at them until they ran away.

Russia appears to be backing away, as well, at least, rhetorically That is worrying some of the separatist groups, says Seddon.

The separatists are hardly unified in their fight against the ruling government in Kiev. Seddon says the governor’s office in Donetsk estimates there are between 1,500 and 2,500 different separatists groups operating in the province.

“Membership ranges from one to 200,” he adds. “This is changing every day, every few hours.” And these various groups squabble with one another.

Amidst that backdrop of fighting without steady supplies or troops, Ukraine's government hopes to hold elections this weekend in eastern Ukraine. If the fighting disrupts the election, Seddon says, it will cast a shadow over the legitimacy of the results.

Ukraine’s constitution, he says, does have provisions that cover parts of the country not being able to vote, whether due to a natural disaster or war — though, it’s uncertain whether what’s happening in eastern Ukraine qualifies.

Kiev says troops will protect people who want to vote. But many people in places like Donetsk don’t trust the troops, and, Seddon says, don’t have faith in the election. "While support for the separatists is not necessarily that high out here, discontent with the government in Kiev is large."

“People are very angry,” he says. “If people do get out to vote, the expectation is that, at best, in Donetsk, the turnout might be 30 percent. For Ukraine, it’s extremely low.”