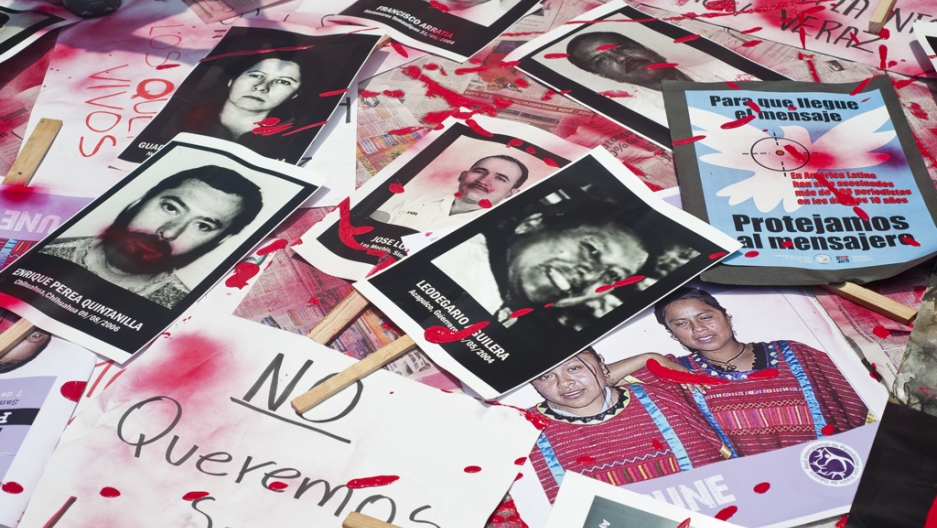 LIMA, Peru — Democracy may have swept almost all of Latin America, but one of its pillars is looking shaky.

Press freedom in the region has sunk to a five-year low. Now just 2 percent of the region's population lives in a completely free media environment — on par with the Middle East and North Africa.

That’s according to the latest annual survey by Freedom House, a Washington, DC advocacy group. South of the Rio Grande, it says, journalists are finding it harder and harder to operate without being censored, harassed and, in some cases, murdered.

Repression by governments and violent retribution by criminal gangs, including drug cartels, are the main culprits.

Also several countries still have oppressive defamation laws that can send reporters to jail for simply doing their jobs.

“It’s an excellent tool for silencing journalists, especially in countries like ours where the justice system is so corrupt,” Adriana Leon of the Peru office of the Press and Society Institute (IPYS), a Latin American journalism watchdog, said of criminal defamation laws.

Even with democracy often fragile here, the idea that just 2 percent of the Latin America's population — the share found in those four countries — can access independent local journalism seems shockingly puny.

Arguably, that figure doesn’t reflect the vibrancy of the commercial media in much of the Americas, or journalists’ willingness to criticize authorities — including sometimes without getting the facts straight.

The DC-based group says it came to these findings after consulting over 60 analysts and mining the research of governments, rights groups and watchdogs worldwide.

“Although there is an element of subjectivity inherent in the index findings, the ratings process emphasizes intellectual rigor and balanced and unbiased judgments,” Freedom House says.

Here’s a look at several Latin American nations’ state of the media, plus a glance at the United States for comparison. Freedom House gave them each a press freedom score from 0 (best) to 100 (worst).

Cuban blogger Yoani Sanchez is making waves on the island.

Cuba easily remains the Western Hemisphere’s most oppressive nation for journalists. Freedom House grouped it as one of eight countries around the world, along with the likes of North Korea and Iran, that attempt to completely crush dissent. The organization did, however, note a mild improvement: Cuba has reduced its “extralegal harassment and imprisonment” of critical journalists. But that may be the least of it. Award-winning dissident blogger Yoani Sanchez on Wednesday started an independent news website, considered the island’s first. Shortly after launch, the site was hacked and redirected readers inside Cuba to posts by Sanchez's pro-government critics. Outside the country, though, readers could access her website fine. Hacking aside, the fact that the Castro government may actually be permitting the site to run just might mark a watershed in the one-party state’s tolerance of critical journalists and political opponents alike.

Journalists take shelter behind a tree during clashes between the National Police and anti-government protesters in Caracas in March.

“President Nicolas Maduro, who replaced Hugo Chavez after his death in office in March 2013, continued his predecessor’s efforts to control the press,” the group notes. That includes arresting journalists and blocking TV networks and social media that reported on anti-government protests. Also, newspapers face chronic paper shortages. Several independent media outlets once critical of the administration have been taken over by the government or businessmen friendly to it, which has led to changes in their editorial line and the exit of many journalists. Venezuela now has not a single free-to-air TV network seriously questioning of the Maduro administration.

Ecuadorean President Rafael Correa has all but silenced critical journalists since taking office in 2007. Perusing a newsstand in the Andean country is a sorry experience, with most dailies clearly afraid to question the government. Repressive laws ban political commentary during election campaigns while Correa has used criminal libel laws to threaten journalists with jail. “Anyone who criticizes the government or simply offers a different point of view is picked out as an enemy,” Carlos Lauria, of the New York-based Committee to Protect Journalists, told GlobalPost. Even cartoonists are targeted.

More from GlobalPost: Ecuador has a sinister gift for Julian Assange

President Cristina Fernandez de Kirchner's administration is in a nasty fight with Clarin.

Argentina fits in Freedom House’s gray area of "partly free." That’s largely because its president, Cristina Fernandez de Kirchner, has been embroiled in a ferocious battle with Clarin, the country’s dominant media group. “What is at stake is the credibility of journalism,” says Lauria, who worries that some media attacks on the government are not based on facts. “Citizens can’t get impartial information on the very real problems that Argentina faces, such as inflation, corruption and crime. But the administration has also managed the media with a strategy of rewards and punishments.” The rewards include generous government advertising propping up the bottom lines of some media. Meanwhile, Freedom House criticized the Argentine administration for barring private companies from advertising in "media groups that do not share the national government’s viewpoints." The supreme court recently upheld a 2009 anti-media monopoly law that will likely break up the Clarin group.

The main problem in Brazil, Honduras and Mexico is violence against journalists by organized crime. But “partly free” Brazil stands apart from the other two, which are categorized as “not free.” It’s earning high marks for bringing the killers to justice, with four murder convictions in the last year. “Although it’s slow, the justice system in Brazil is providing answers, unlike in some other places,” says Lauria, who recently met with President Dilma Rousseff. Brazil and Mexico’s government’s, meanwhile, are among the most tolerant of media criticism in the region — although Mexico’s ruling Institutional Revolutionary Party’s cozy relationship with broadcasting giant Televisa has sparked nationwide protests.

A photojournalist is pushed away by riot police in April 2006, clearing a path for Ollanta Humala, then a presidential candidate.

This country has more than its share of problems, including criminal defamation and even unprofessional journalists accepting bribes for favorable coverage of politicians or businesses. Right now, though, the biggest issue may be the near monopoly of the press by one group. El Comercio owns nearly 80 percent, by circulation, of Peru’s newspapers and magazines, a concentration of media ownership not permitted in many democracies. It has also been accused of highly biased coverage. In 2011, Nobel Prize-winning novelist Mario Vargas Llosa pulled his column from the group’s flagship eponymous daily, accusing it of favoring the party of former President Alberto Fujimori, jailed for corruption and human rights abuses. “Media concentration obviously reduces the diversity of voices involved in the national public debate,” IPYS’s Leon says diplomatically. A group of prominent independent journalists has now brought a lawsuit against El Comercio’s domination.

The US is tied with Austria and Micronesia as the world's 30th freest nation for journalists, according to Freedom House. Its press score took a mild tumble thanks to the Obama administration’s pursuit of NSA uber-mole Edward Snowden and WikiLeaks source Chelsea (previously Bradley) Manning, and the Justice Department’s eavesdropping on Associated Press reporters’ phone calls. Officials and others, particularly on the right, claim that those cases have not actually limited journalists’ freedom to cover the news they see fit. But the fact that there is a debate at all shows how fragile these liberties are even in the US, never mind countries with weaker checks and balances.