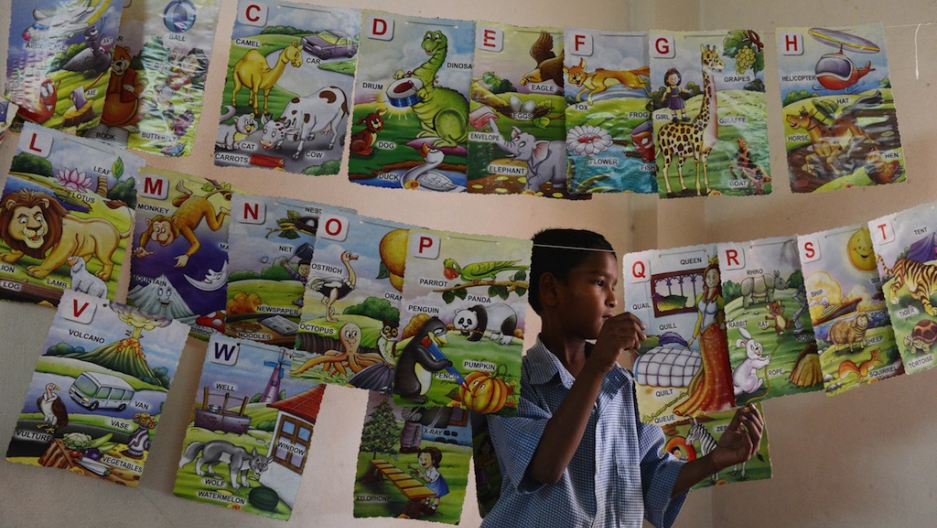 An Indian school child looks at a display exhibited at a science fair at a government primary school in Hyderabad on March 24, 2014. The science exhibition has been organized for the first time at primary school-level to encourage the development of talent and activities.
Credit: NOAH SEELAM
Share

NEW DELHI — India’s six-week-long election, in which about 537 million out of 814 million eligible voters went to the polls, is finally over with the election of a new government led by Narendra Modi of the Bharatiya Janata Party.

While the hopes of all voters are for a future of opportunity and progress, the politicians all too often campaigned along retrograde lines, perpetuating divides on the basis of caste, religion, or ethnicity. Overcoming those enduring obstacles to social development is particularly important for the millions of children from poor and marginalized communities—Muslims, tribal groups, and Dalits—who are being denied a basic education.

India produces well-trained professionals who excel in the world economy; so much so that in the United States, there is a growing concern that the US education system is unable to keep up with India and China. Yet, India’s public education system, especially at the elementary levels, is excluding children because of bias.

As economists Amartya Sen and Jean Dreze have pointed out, “The steep educational hierarchy that has come to be tolerated in India is not only terribly unjust, but also extraordinarily inefficient in generating the basis of a dynamic economy and progressive society.”

Discrimination against children from vulnerable and marginalized communities by teachers and other school staff leads to greater truancy and, over time, they stop going to school. Once these children drop out, they often end up as child workers or child brides.

In 2009, the Indian government enacted an ambitious law, the Right of Children to Free and Compulsory Education Act, guaranteeing free schooling for all children between age 6 and 14. Four years later, nearly every child has enrolled in school, but nearly half are likely to drop out before finishing eighth grade.

These children are often the first generation in their families to go to school. In the absence of support from teachers, they are confronting ugly long-standing discrimination in the classroom.

Weak monitoring by Indian state governments fails to check mistreatment by teachers or to track children who have dropped out or are at risk of doing so. Inaccurate data — including miscalculations by different government departments, or inflated attendance records — often understate the problem and prevent prompt intervention by the education authorities to ensure children remain in schools until they graduate.

More from GlobalPost: The Saffron Election

In their campaign promises, the two main national parties — Indian National Congress and the Bharatiya Janata Party — acknowledged the critical role education plays in alleviating poverty and improving development. Both pledged to put education at the top of their development agenda and to strengthen the implementation of the Right to Education Act.

So far, all political parties have focused on building more schools and ensuring every child is enrolled in school.

There is an increasing realization in recent years that the quality of education needs to have a greater focus. Unfortunately, equality is still a distant dream for many of India’s marginalized children.

That goal should be zero discrimination in schools, which can be achieved by training teachers in inclusive practices and laying out disciplinary measures for authorities and school staff who discriminate or allow discrimination of any kind.

Political leaders, having checked the box for universal elementary education, are pledging to shift their energies and resources toward universalizing secondary education – an important goal but of little help for those that do not get through primary school.

To be sure, India’s recent education law has helped to build more schools and give greater access to children in rural India from the poorest and most socially marginalized communities. If the authorities fail to implement the law to keep these children in the schools and provide them with a child-friendly and equal environment, an ambitious and welcome initiative is at risk of failing.

Merely ensuring every child is enrolled in school is not enough. The new government must ensure these children actually attend and graduate from elementary schools with a good education.

That can only happen if India’s leaders press for zero discrimination in schools, emphasizing teacher training in inclusivity and firm enforcement of discipline for authorities and school staff who discriminate or tolerate discrimination.

Jayshree Bajoria is a researcher at Human Rights Watch and author of the report, “They Say We’re Dirty”: Denying an Education to India’s Marginalized. Follow her on Twitter at @jayshreebajoria