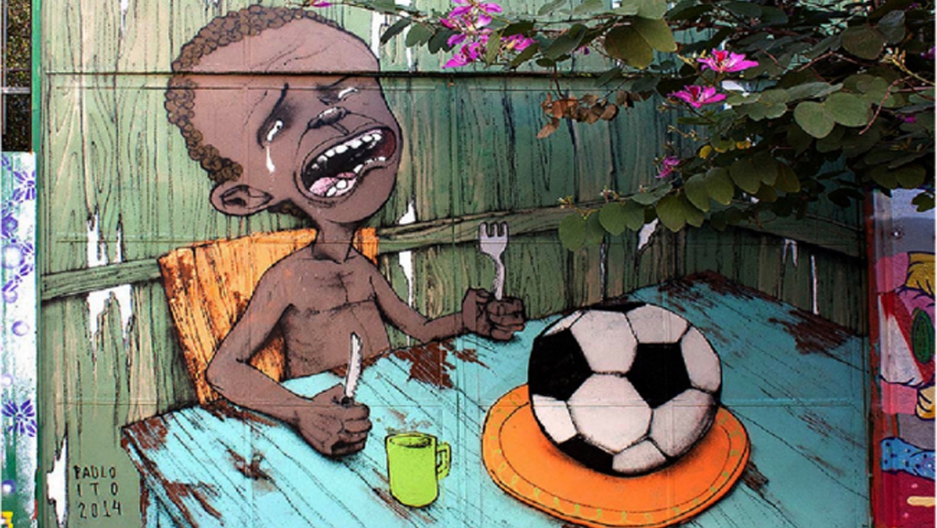 You don't need to know that much about Brazil to take in this image.

A screaming, crying Brazilian kid pounds his fists on the table, nothing on his dinner plate save a soccer ball.

OK, maybe you need to know the World Cup is coming. But that's it. Brazilian artist Paulo Ito's mural pretty much says everything else.

The World Cup has cost Brazil a whopping $11.5 billion. Meanwhile about 25 percent of people live under the poverty line. That means 50 million people are like the kid in this picture. They can barely afford food.

“People already have the feeling and that image condensed this feeling,” Ito told Slate.

Ito, who has been a street artist for 14 years, painted this image earlier this month on the doors of a school in what he says is the primarily middle-class area of Pompeia, Sao Paulo. Within days it had gone viral.

“I didn’t mean [to say] nobody is doing anything against poverty,” he said. “But we need to show the world or ourselves that the situation is still not good.”

Unlike previous World Cups, when soccer-crazed fans painted the streets with the team's green and yellow, this time around it's paintings like this that are striking a chord. Brazilians feel there are simply more important things to worry about.