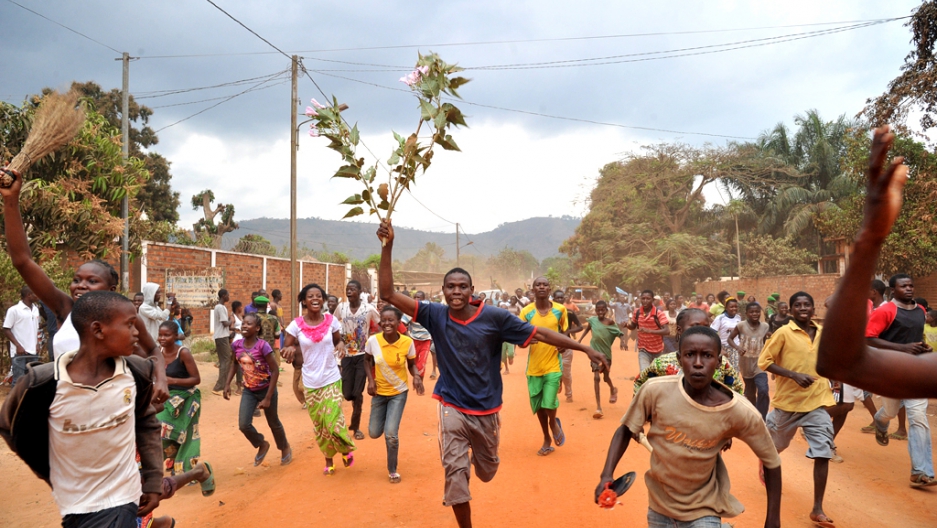 Residents of Bangui celebrating after former Seleka rebels were escorted out of Kasai military camp in Bangui to another camp outside the city on January 28, 2014.
Credit: ISSOUF SANOGO
Share

In a little over a year, the conflict in Central African Republic has driven an estimated 600,000 people from their homes and killed countless thousands.

The death toll is “countless” because the violence has been too brutal and rampant to track. The UN Refugee Agency estimates that more than 2,000 have been killed since last December, when the violence suddenly escalated, but the conflict has been going on since March 2013.

Although the fighting is often cast along religious lines — Muslim Seleka rebels fighting against anti-Balaka militia who are predominantly Christian — it’s more complicated than that.

And the roles countries like Chad, France, and Sudan are playing in the conflict are critical to finding a solution. GlobalPost spoke to Enough Project’s field researcher Kasper Agger, who recently visited CAR for several weeks to take a closer look at the underlying drivers of violence.

Agger's report noted that while the Chadian and French governments helped former CAR President Francois Bozize capture power in 2003, they stood to the side when his rule was challenged by the Seleka rebels 10 years later. Agger attributes their withdrawal of support to Bozize favoring China and South Africa for trade deals.

CAR has been in turmoil since the Seleka ousted Bozize in March 2013.

Chadian soldiers sitting in a pickup truck as they leave Bangui on April 4, 2014.

Last week, Chad announced that it was closing the border it shares with Central African Republic, its southern neighbor. The border closing comes after Chad withdrew all of its peacekeeping forces from CAR in April, numbering more than 800.

Agger said the closing of Chad's border with CAR was more of a symbolic gesture, as controlling the flow of the border was very complicated. "There's a lot of ungoverned area there, so there's no way the government could effectively close that border."

The border closure and troop pullout were Deby's attempts to assert pressure on the international community, Agger said.

Chad has two key interests in the country, according to Agger. One is security. "There have been a number of occasions when rebel groups have used the Central African Republic to attack Chad," said Agger. Some, like the Chadian rebel movement Baba Lade, have sought refuge in the northern parts of CAR.

Deby's main concern is to maintain some measure of control over what's happening in the northern parts of CAR. Ensuring that no unfriendly rebel groups gain ground in CAR is also related to Chad's second main interest in the country: Oil.

"Chad is drilling oil from that border region and it's actually a shared oilfield with CAR," Agger said. While there is no drilling on the CAR side yet, Chad has high interest in keeping tight control over the area.

An audit by Extractive Industries Transparency Initiative estimated that Chad "gained USD 2.1 billion in oil revenue, around 80 percent of overall government revenue [in 2011]."

Helga Dickow, a Central Africa expert at the Arnold Bergstresser Institute at Freiburg University, told Deutsche Welle that oil revenue was the reason Chad was able to build up its military strength.

CAR was a French colony until 1960. France sent 1,600 troops to the country in December, when the violence first escalated. As of February, the number has risen to 2,000.

When France first sent troops, the Associated Press noted that the "image of France as the gendarme of Africa is hard to erase." The country is also involved in counter-insurgency operations in Mali, and Africa's Sahel region.

France, perhaps unsurprisingly, has a long history of trying to install French-friendly companies in CAR. Agger said France's financial interests in the country include companies that deal with uranium and exporting timber.

Critics have accused French troops of looking after French interests in the country rather than protecting civilian lives. Enough Project's report cites diplomats in CAR's capital Bangui saying France is in CAR "to protect its long-term access to natural resources such as oil, uranium, timber, and minerals."

"In Bangui, they're protecting Air France, they're protecting the embassy," Agger said. "When you talk to local people, in the camps for the internally displaced, they seem reluctant to protect some of those areas. They don't want to get involved in the fighting on the ground."

"Where France could try to strengthen its intervention is to try to support the [transitional] government more, Agger said. "Of course, we should recognize that their military deployment was crucial to stabilize the country and avoid further killing of civilians."

Other diplomats have argued that France's role in CAR is largely humanitarian. Harold Hyman, a foreign policy analyst at the French channel BFM TV, told NPR, "If France does not go into a country that's in destruction and mayhem, there are demonstrations in the street from the diaspora of those countries — 'Why aren't you helping us?' So we've settled into this acceptance of a sort of big-brother role."

General Moussa, looking at his phone, is a Sudanese mercenary commander and member of the janjaweed militia with reported ties to the Sudanese government.

The leader of the Seleka and now ousted president, Michel Djotodia, spent many years in Sudan's South Darfur region as a counselor for Bozize's government, building "extensive networks with armed mercenaries and poachers who later joined the Seleka," according to Enough Project.

"The most well-known mercenary commander tied to the Seleka is Sudanese self-proclaimed 'General' Moussa Assimeh, who is allegedly a high-ranking member of the Janjaweed militia and is closely tied to the Sudanese government," the report noted.

Sudan has lost a lot of revenue since its split from South Sudan, and Agger said it gave its janjaweed militia fighters a chance to go loot in the Central African Republic.

Daniel Bekele, HRW's Africa director, said, "The Seleka seem more focused on looting and targeting the general population than on reestablishing a functioning government that can protect people from abuse."

In February, HRW noted that the Seleka "include numerous Chadian and Sudanese mercenaries."

Agger believes the best way forward is for the international community to lend support to CAR's transitional government. Enough Project's report calls on the UN, EU and other donors to send advisors to help the government "deliver basic state services such as functional hospitals, schools, police judges, tax collection, and general state administration."

"Especially on the political side, it seems that France has left the transitional government to some extent very much alone," Agger said. "They haven't really followed through on their political support."

The main point toward finding a solution is to encourage political dialogue and reconciliation, said Agger. "The next step should be to shift the attention away from the violence and give people another outlet for some of their frustrations and worries."

There's no money for the state, according to Agger, who met with civil servants who had not been paid in six months. "There's no army, there's no police, there are no judges. So, the international community needs to get involved even though it's in the midst of conflict." He suggested getting advisors on the ground who could train police and judges, and providing enough finances for the government of CAR to function again.