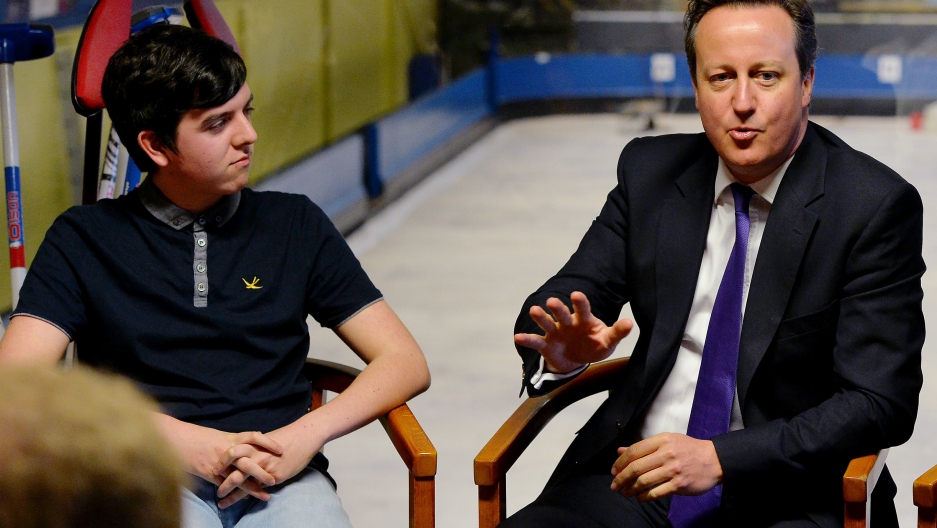 EDINBURGH, Scotland — When David Cameron was here last week to call on Scots to reject independence from the United Kingdom, he did it by promising more powers for the devolved Scottish parliament.

Scots could have the “best of both worlds,” the prime minister argued. Scotland and the rest of the United Kingdom would be “stronger, safer, more secure and more successful” inside the union if they vote “no” in a referendum planned for September, he said.

But that’s a message he’s struggled to get across.

With polls suggesting support for leaving the UK is slowly growing — even though the opponents of independence still maintain a clear lead — many are asking why the prime minister appears to be doing the minimum to save a three-century-old union.

Some of his obstacles are obvious.

The Conservative Party leader, who was privately educated and has a background in public relations, is often caricatured here as aloof and remote from Scottish concerns.

The Conservatives hold just one of Scotland’s seats in the British parliament in London and are deemed irrelevant in the devolved parliament here, which is dominated by the pro-independence Scottish National Party.

Cameron’s allies among Scottish Conservatives — whose official title is the Conservative and Unionist Party — have traditionally resisted the kind of devolution the prime minister is offering Scotland. The party called for a “no” vote in the 1997 referendum that led to the establishment of a Scottish parliament.

Pro-union parties have also been unable to agree on the shape further powers for Scotland would take in the event of a “no” victory on Sept. 18.

Independence supporters, for their part, point to history to argue the case that the prime minister can’t be trusted to keep his word: When Scots voted in an unsuccessful referendum on devolution in 1979, then-Conservative leader Margaret Thatcher promised to deliver an improved home-rule settlement if they voted “no.”

In the end, Scotland had to wait almost two decades for its devolved parliament.

“If a bearded transvestite can win Eurovision, I suppose anything is possible,” commentator Iain Macwhirter wrote in last weekend’s Sunday Herald about this month’s popular Europe-wide song contest. “But believing in more powers is a bit like believing Scotland could win the World Cup: it's theoretically possible, but vanishingly remote and ruled out for the time being.”

More from GlobalPost: 22 reasons Eurovision is the greatest of all televised music contests

The Scottish National Party (SNP) says only a vote for independence would guarantee more powers for Scotland.

“Nobody will believe Tory promises of more powers for Scotland because the last time that happened the only thing Scotland got was Thatcherism and 18 years of Tory governments we didn't vote for,” Scotland’s first minister Alex Salmond said last week in response to Cameron’s pledge.

The prime minister has also been put in a difficult position by the way the referendum campaign is shaping up.

While he’s refused to become seriously involved — maintaining the decision is for the Scottish people to make — and has rejected repeated offers to participate in a televised debate with Salmond, a “yes” vote would seriously damage his credibility.

Cameron is “caught in an awkward position,” says James Maxwell, a political commentator for the New Statesman. “The government don’t quite know how involved to get.”

Although Cameron has a “clearer ear” for the Scottish debate than many of his Conservative colleagues, Maxwell says, “he is a right-wing patrician Tory with little or no electoral legitimacy in Scotland, so he is never going to play particularly well with the electorate here.”

Not everyone’s a critic, however.

Some have welcomed Cameron’s cautious approach to the referendum, including Sir Malcolm Rifkind, a former Scottish Conservative MP who’s called it “extremely wise.”

“Alex Salmond wants to turn this into a Scotland versus England issue, and particularly an SNP versus the Conservatives issue,” says Rifkind, a onetime Tory defense minister. “There's no reason why the rest of us should play that game.”

More from GlobalPost: In Germany, no means yes

Paradoxically, the independence vote may offer Scottish Conservatives their best chance in a generation to improve their dismal electoral fortunes at home.

A party commission is due to publish its proposals for further devolution in Scotland in the event of a “no” vote.

With previous proposals from the Labour and Liberal Democrat parties having received decidedly lukewarm receptions, the Scottish Tories have an opportunity to put some eye-catching suggestions on the table.

Measures thought to be under consideration include the full devolution of income tax.

“The Tories have a chance to stake out the radical ground,” Maxwell says.

Of course, any new powers for Edinburgh would depend on Scots heeding Cameron’s pleas and saying “no” in September.