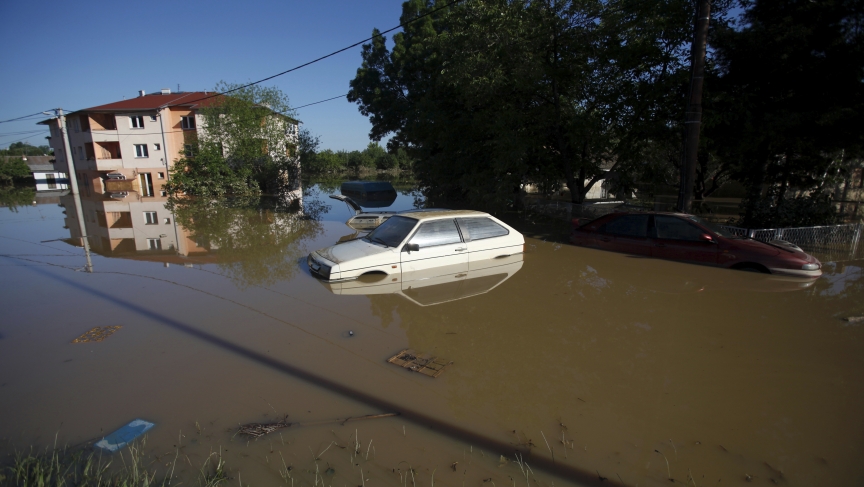 A car is seen stranded in the flooded town of Obrenovac, southwest of Belgrade.

The rain over the Balkans may have stopped, but the flood waters have yet to recede.

With more than 35 people dead, many missing, and thousands more people displaced, the region is in a state of shock, said freelance journalist Mitra Nazar. She has been covering the crisis from the Serbian capital, Belgrade.

One of the hardest hit areas is the medium-sized town of Obrenovac, just outside of Belgrade. Nazar visited the town on Friday, as flood waters surged into the town center.

“When I arrived the city was totally flooded. People were standing on the roofs waiting for the rescue teams,” she said.

In Obrenovac, the flooding came on so fast that many residents didn't even have time to grab any belongings.

Nazar spoke with one woman who described trying to escape in her car, and the water began to flood her house. But when she finally reached her car, the water had swallowed up her car.

“So she couldn’t leave,” Nazar said. “She ran back into the building, to the top floor, and waited and saw the water rise. So it’s very hard to imagine what that looks like to people."

Thousands were evacuated to Belgrade where they're waiting in makeshift shelters for the flood water to go down. But the Sava and Danube rivers are still swollen — and some officials fear a second flooding, Nazar said. But the real concern is flooding at the Nikola Tesla power plant, just outside of Belgrade.

“The authorities keep giving mixed information,” said Nazar. “One day they say the plant is safe, the next moment they say it’s at risk.”

What is for certain is that the plant provides half of the electricity for the entire country of Serbia. And volunteers have been working overtime to build sandbag barriers to prevent more water from entering the plant.

“That’s one of the biggest concerns at this point,” Nazar added.