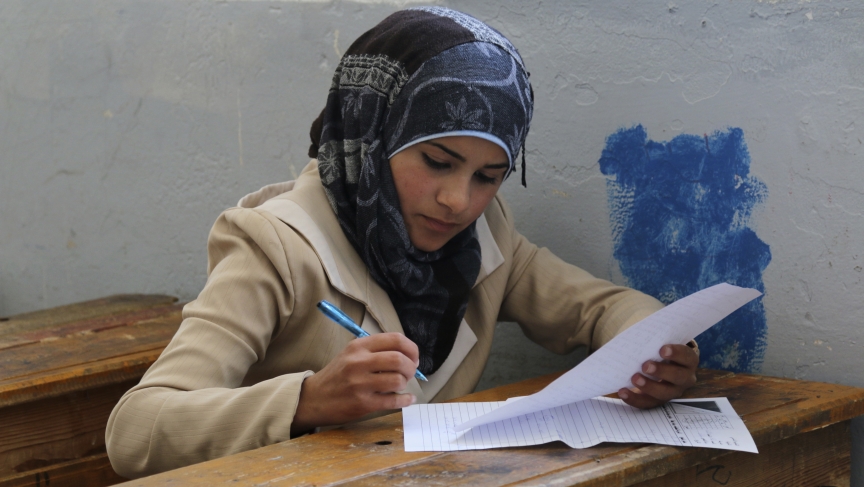 A student takes a test in Hama, Syria. Despite the ongoing war, students in many parts of Syria are taking comprehensive exams.

For many students, final exams are a headache. But in a besieged Syrian neighborhood, just getting to take a test this week is a cause for celebration.

That's the case for 120 ninth graders who boarded buses Sunday on the outskirts of Damacus. They made a perilous journey from the Syrian refugee camp of Yarmouk to get to safe locales in the capital where they could take nationwide, end-of-year exams. And the BBC's Lyse Doucet took the journey with them.

"The students had to make their way through these corridors, this warren of ruins," says Doucet. "Just hours before they came out, we could hear sporadic gunfire and hear reports that even at this eleventh hour — on the eve of the nationwide exams — after weeks of negotiations, the negotiations were still going on with some of the rebel groups to ensure safe passage."

The teenagers — many of them Palestinian refugees living in Syria — have been trapped inside their neighborhoods for nearly a year. About 300 students had considered taking the journey out, according to Doucet. In the end, only a fraction took the risk.

"You have to admire these students, so determined not to miss another year of school that they were willing to come out in those conditions," Doucet says.

In recent months, photos of Yarmouk's collapsed buildings and crowds there waiting for food distributions have become iconic. Food is in such short supply that some of the students said they had been eating soup made of spices and local grasses.

Despite the shortages, Syrian authorities say they expect the students to return to Yarmouk after completing the two-week exam. But as Doucet watched how relatives greeted them after they emerged from the buses, she thought, "They're never going to let them go now. "

Many of the families of the students are separated, with some stuck inside Yarmouk and unable to unite with relatives inside Damascus.

After experiencing the journey herself, Doucet says students in peaceful settings have little to gripe about.

"If any students are listening, and complaining at this time of year that they have to study so hard for their exams, just spare a thought for the students of Yarmouk who will take these kind of risks to ensure they don't miss these crucial tests."