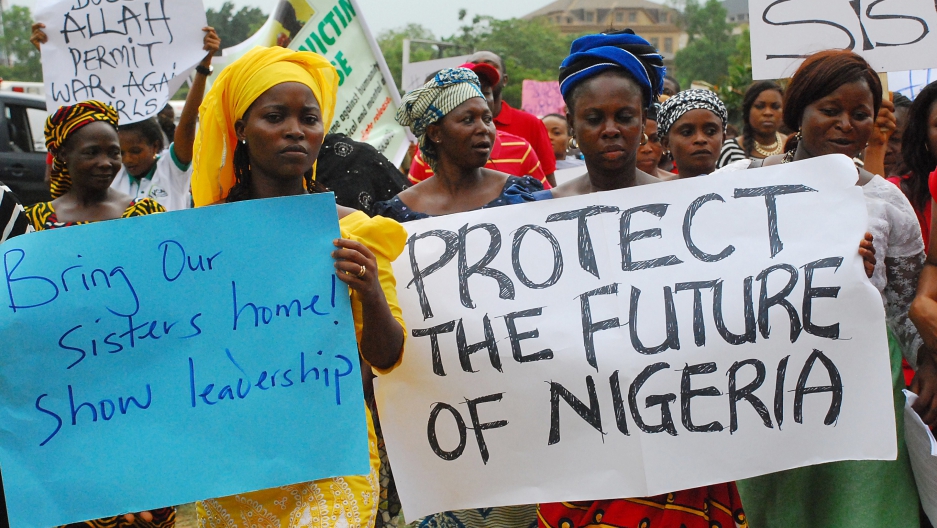 Women hold banners during a march of Nigeria women and mothers of the kidnapped girls of Chibok, calling for their freedom, in Abuja on April 30, 2014. Nigerian protesters marched on parliament today to demand the government and military do more to rescue scores of schoolgirls kidnapped by Boko Haram.
Credit: Philip Ojisua
Share

ABUJA, Nigeria – The world’s media has turned its gaze to Nigeria with the kidnapping of more than 270 girls from a boarding school last month.

The militant Islamist group known as Boko Haram has taken responsibility for the abductions, and the insurgent group’s leader shook Nigeria and shocked the world in threatening to sell the girls into slavery. The abductions have spurred a global online call to action through the social media campaign #BringBackOurGirls.

But far from the lens of global media and from the heavily guarded, air-conditioned enclave where the economic elites gathered here earlier this month for the World Economic Forum, there was another event that went largely unnoticed – one which exposed Nigeria’s fragile core, without an online hashtag to highlight the cause.

Last March, a half-million people flocked to recruitment centers across the country to apply for fewer than 5,000 government positions. Pandemonium ensued and at least 16 Nigerians were killed in stampedes. Hundreds were injured.

Loveday Ijomanta, 26, was there that day. He graduated from the University of Abuja in 2011 with a degree in mechanical engineering, but still hasn’t found a job. He was among those packed into the national stadium in Abuja only to watch his fellow Nigerians jump on top of the other, clawing for registration forms like they were golden tickets out of a concrete wasteland.

“It was just so sad,” he recalled. “Unemployment in Nigeria is exponentially rising… and if unchecked, it could put the entire nation in jeopardy.”

The interior minister, whose office oversaw the recruitment, dismissed the fatal scramble and said the job seekers simply “lost their lives through their impatience.”

But for many observers, the March melee in the stadium marked a disturbing turning point. That is, that the unemployment situation in Nigeria — a bitter irony in a country with such vast oil wealth — seems to have literally turned deadly, with the government largely watching from the stands.

And for most Nigerians, this acute lack of opportunities amid a culture of government corruption and growing economic disparity looms larger in their day-to-day lives than the perils of the Boko Haram insurgency.

Boko Haram is a phrase that combines the local Hausa language and Arabic and loosely translates as "Western education is blasphemy, or forbidden.”

In addition to the abductions, Boko Haram has also claimed responsibility for a bombing that killed at least 70 people in the outskirts of the capital city in April. In both instances, the Nigerian government has been sharply criticized for failing to confront the mounting insurgency in the Northeast. For many Nigerians the abduction and the bombings highlight the government’s overall ineptitude at crisis prevention and management.

But the outrage felt here in Nigeria over the abduction of the girls is part of a larger criticism of the government’s inefficacy, and often, sheer indifference. Nigeria's government has been struggling to confront an enemy far bigger than Boko Haram: devastating levels of unemployment and a widespread sense of despair and frustration felt by an entire generation, struggling to create a future for themselves.

We have been reporting on youth unemployment in Nigeria over the last two months as part of the The GroundTruth Project’s reporting fellowship on youth unemployment around the world. And we’ve seen firsthand, the devastating consequences of a generation left idle and too often turning to crime, religious extremism and violence to fill the void. Our reporting will be part of the year-long reporting effort which will be published as a GlobalPost Special Report titled “Generation TBD: Millennials Facing an Uncertain Global Economy.”

We contextualized some of our reporting in a New York Times op-ed, “The Kidnapping of A Country,” on May 15 arguing that the kidnappings of the schoolgirls were only “the tip of the iceberg,” as one observer put it, a grotesque symptom of the country's cancerous problems: institutionalized and endemic corruption, woeful economic inequities and squandered potential.

With an estimated 170 million people, Nigeria is Africa’s most populous country and Africa’s largest oil producer. In April, its economy surpassed South Africa’s in size, making it the largest on the continent. But other numbers dictate the country’s future. Sixty percent of the country lives in poverty. The literacy rate is around 60.8 percent and life expectancy hovers at 50. Nigeria scored 144 out of 177 on Transparency International’s 2013 Corruption Index and ranked 153 out of 187 countries in the UN Development Index. According to Nigeria’s National Bureau of Statistics, 54 percent of Nigerian youths were unemployed in 2012.

In Abuja at the city’s largest federal university, we spoke to youth who have been left standing around listlessly, bereft of road maps for life after graduation in May. Many of them will graduate a year behind schedule due to a nearly six-month halt in studies during nationwide teacher strikes. Nigeria’s public education is abysmal and has birthed a vast skills gap, which has rendered most students unemployable. The nation has failed to integrate the estimated 10.3 million out-of-school children, one of the highest rates in the world, who have no means to attend school.

In the North, the birthplace of Boko Haram, economic indicators are most stark: an estimated 70 percent of the population lives on less than $1.25 a day.

In northeastern Nigeria, the origin of the Boko Haram insurgency, economic productivity has plummeted as farmers desert their fields, traders close their stores and construction companies abandon large-scale projects over fears of being attacked.

For many, Nigeria’s staggering unemployment rate and inescapable cycle of poverty has meant a life of crime and violence. In the early 2000s, fighting seized the swampy mangroves of the Niger Delta, where the country’s rich crude oil originates. Thousands of youth – self-proclaimed freedom fighters who were protesting underdevelopment and disenfranchisement – stole oil by destroying pipelines and kidnapping for ransom. To address grievances and demilitarize the region, the government granted an amnesty in 2009 to the militants, and promised them jobs and skills acquisition training. Four years later, many in the program, like 35-year-old Livinus Damca, told us they've been forgotten once again.

As part of the Amnesty program, Damca turned in his AK-47 and was sent to Poland, where he received maritime training. In 2013, he returned to his two-room home in the Delta, armed with a certificate but no real ammunition. He’s still looking for a job and spends most days with his “boys,” who are similarly unemployed, searching (and sometimes just waiting) for the next opportunity. In the next few weeks as we publish our part of the Generation TBD series, we’ll introduce you to several men and women in this restive region, all fighting for a chance.

The challenges of the amnesty program – which hasn’t fully delivered on its ambitions – is indicative of the government's lack of genuine political will in changing Nigeria's unsustainable status quo. Simply throwing oil money at the issue won’t help. Both the insurgencies in the South and North, while ideologically disparate, are seen by political analysts here as mirrors for Nigerian society at large, run by an out-of-touch power elite that offers hollow promises to a people pushed to the margins and extremes. Hustling isn’t an option; it’s a lifestyle. And sometimes, it’s a deadly stampede to nowhere.

“The problem used to only be the leadership,” Nigerian writer Teju Cole explains in his recently released book Every Day Is For the Thief. “But now, when you step out into the city, your oppressor is likely to be your fellow citizen, his ethics eroded by years of suffering and life at the cusp of desperation.”

In Lagos, Nigeria’s crowded commercial capital, the daily grind wears on the faces of its 21 million residents. In Mushin, one of the city’s poorest neighborhoods, plain-clothes policemen detained us for four hours – our credentials and equipment confiscated – for simply filming 23-year-old entrepreneur, Tayo Olufuwa, whom we’ll also introduce you to in our reporting for Generation TBD. A motley crew of policemen told us they were protecting us from Boko Haram and other security threats. While no arrests have been made for last month’s mass abduction of the schoolgirls, the department gathered around in lightning speed to harass us for hours.

Olufuwa was mocked by officers for being an entrepreneur (“What does that even mean?” One police officer exclaimed, rolling his eyes) called “foolish” and “up to no good.” Other officers haggled our driver for a bribe, an essential social and political currency in Nigeria.

After we made enough calls to people in power, or people who know people in power, we were finally released. That’s the way it works in Nigeria: one can pay his way out of reality with money or connections. But most, like the girls in Chibok, can’t afford the get-out-of-jail-free card.

Olufuwa, who has joined the #BringBackOurGirls protests that have taken place around the country for weeks, says the government’s handling of the mass protests aren’t much different than their handling of the unemployment situation.

“It shows the government doesn't really care so much about us,” he said on his way to work at the Co-Creation Hub, a social innovation center that cultivates entrepreneurs like Olufuwa.

In the coming weeks, we’ll highlight youth like Olufuwa who have lost faith in in their government, and have often taken matters into their own hands. Their struggles jaggedly piece together a much larger and crucial portrait of Nigeria. Their struggles grimly illustrate that #BringBackOurGirls is really part of a much bigger fight — one that can’t be neatly hashtagged — to bring back a country from the edge of collapse.