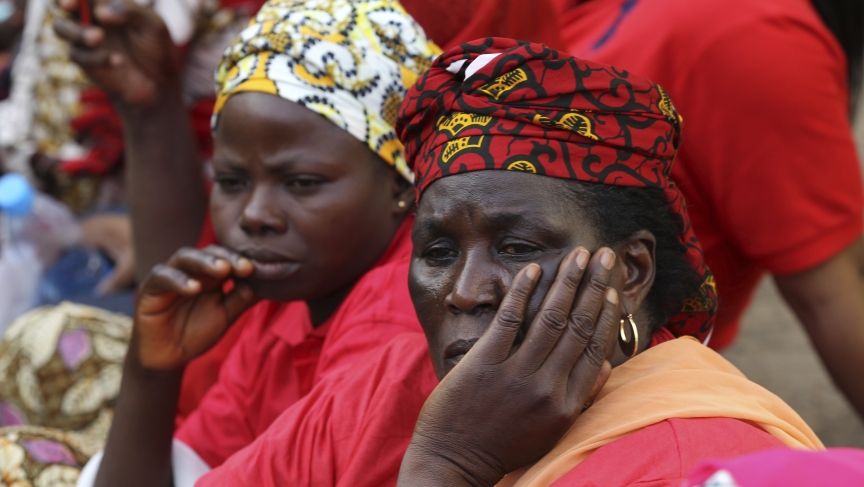 Nigerians take part in a protest demanding for the release of secondary school girls abducted from the remote village of Chibok, in Asokoro, Abuja May 13, 2014.

On Saturday, French President Francois Hollande hosted an international summit on the kidnapping in northern Nigera. Nigeria and four of its neighbors pledged to share intelligence and coordinate their activities to rescue the girls.

“When more than 200 young girls are being held in barbaric conditions with the prospect of being sold into slavery, there are no questions to be asked, only actions to be taken," said the French president.

However the symbolism of that resolve was undermined, at least for many Nigerians, the day before. On Friday, Nigerian President Goodluck Jonathan cancelled at the last minute a planned visit to Chibok, the town where the girls had been kidnapped. The reason given was security concerns.

Jina Moore, the international women's rights correspondent for BuzzFeed, says people she spoke to were not surprised at the cancelled visit for a simple reason. Logistically, it would have been hard for the president to visit the remote town on Friday and then make it to Paris for the summit with other leaders.

But she says the cancellation still sparked anger from the girls' families, many of whom accuse Nigerian President Goodluck Jonathan of having no respect for their pain. Jonathan has yet to visit Chibok, though the girls were kidnapped a month ago.

And the problems with Boko Haram in northeastern Nigeria are hardly new. "The security problem is deep," Moore says. "Abductions are not new, attacks on schools by Boko Haram are not new. And people who live in these communities will tell you that communities get advance notice [of these attacks.]"

Amnesty International reported last week that security services and the school had several hours notice of the abduction. "That was not unusual, that is the norm. That is sort of the modus operandi of Boko Haram from what I have been told," says Moore.

These problems have long existed and the government has done little about them.

Moore says that citizens and civic groups have been gathering daily in Abuja, Nigeria's capital, to focus attention on the problem and get action.

"Nigeria is a collective society," she explains. She says someone at a gathering told her, "It may not be my daughter, the daughter that my wife gave birth to, but the girls who have been kidnapped are my children." Moore says, "the sense of collectivity is very, very big here. The outrage is also collective and it is felt very personally."

She is hesitant to call these gatherings "protests." She says the feeling among the crowd is not political. "They don't want their daily gatherings to be coopted by people who want to shout about this, that, or the other party or politician or whatever."

"To the extend they are protesting, they are protesting a very big system that has contributed to the lethargy of the response and to the neglect of the northern region," Moore says. "But, really, it's more of a sort of call to action."

According to Moore, the Nigerians say they will continue to hold daily public gatherings until the girls are released.

"I had my doubts at first, but that was a very firm message in the evening vigil on Wednesday that marked the 30th day of captivity for the girls," she says. "And since then, the crowd has only gotten bigger."