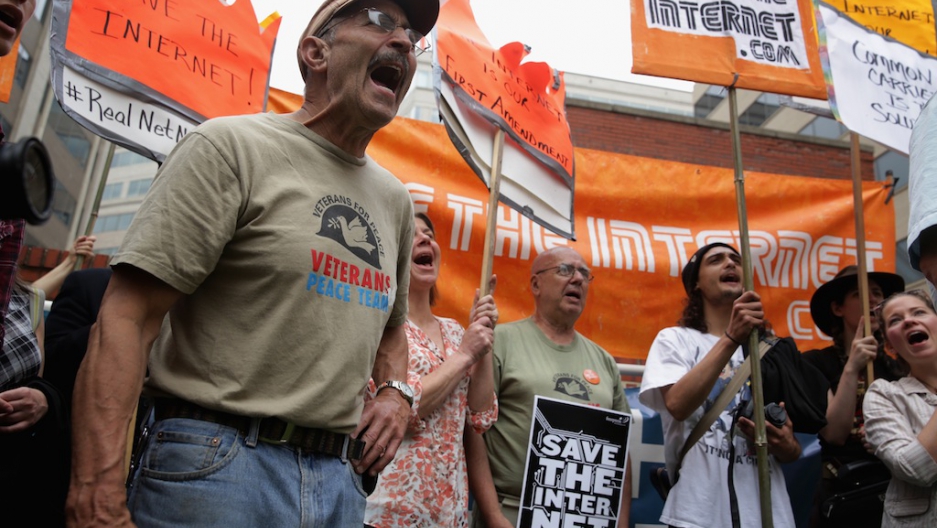 Activists protest outside Federal Communications Commission (FCC) as the commission is about to meet to receive public comment on proposed open Internet notice of proposed rulemaking and spectrum auctions May 15, 2014 at the FCC headquarters in Washington, DC. The FCC has voted in favor of a proposal to reform net neutrality and could allow Internet service providers to charge for faster and higher-quality service.
Credit: Alex Wong
Share

The Federal Communications Commission (FCC) on Thursday voted three-to-two to push forward a highly controversial proposal that critics argue could signal the end of net neutrality.

The rules outlined in the proposal would initiate a new online economy by allowing Internet service providers to charge websites for better, faster delivery of their content to American users.

By presenting the potential for a content dissemination “fast-lane,” or prioritization, the proposed rules would mean that smaller companies that are unable to pay the toll “would likely face additional obstacles against bigger rivals,” according to the Washington Post. “And,” the article added, “consumers could see a trickle-down effect of higher prices as Web sites try to pass along new costs of doing business with Internet service providers.

“Who gets to go fast and who gets to go slow?” New York Times media columnist David Carr asked in a video published on Thursday. “If my message comes to you really slowly and another person’s message comes quickly and directly, whose message is going to be heard? That has implications for democracy, for commerce.”

It also has implications for access to information and knowledge.

A recently drafted UNESCO study, which did not address net neutrality, but rather the idea of global Internet Universality, stated that “access to information, as a precondition for knowledge, is linked to Universal Declaration of Human Rights Article 19, which affirms that the right to freedom of expression ‘includes the freedom to seek and receive information and ideas through media regardless of frontiers’.”

But simply having access to information, the report continued, “is not a sufficient requirement for the creation of Knowledge Societies.” Another fundamental factor is the “encouraging [of] local content online.”

The kind of open access UNESCO is working toward, through the fight against censorship, is precisely what could be at risk, critics have said, by simply subverting smaller enterprises — a reality that President Obama previously said could result in “much better quality from the Fox News site and you’d be getting rotten service from the mom and pop sites.”

The president received ample criticism in April after the Wall Street Journal broke the news that FCC Chairman Thomas Wheeler, whom the president had appointed and who is also a former lobbyist for the cable industry, was responsible for the proposal that is an “explicit and blatant violation” of the president’s 2007 campaign promise to protect net neutrality.

“I am a strong supporter of net neutrality,” Tim Wu, professor at Columbia Law School and former senior advisor to the Federal Trade Commission, quoted Obama as saying in an op-ed for the New Yorker. “What you’ve been seeing is some lobbying that says that the servers and the various portals through which you’re getting information over the Internet should be able to be gatekeepers and to charge different rates to different Web sites… and that I think destroys one of the best things about the Internet — which is that there is this incredible equality there.”

Wheeler has come out to defend the rules as a plan to halt discrimination by forbidding Internet service providers from blocking Web sites, and said that the proposal includes a strategy for enforcement by establishing a watchman to oversee and investigate complaints from the public.

“We are dedicated to protecting and preserving an open Internet,” Wheeler said before the vote. “What we’re dealing with today is a proposal, not a final rule. We are asking for specific comment on different approaches to accomplish the same goal — an open Internet.”

Since April, the proposal has pinned Silicon Valley titans like Facebook and Yahoo against Internet service providers like Verizon and AT&T, and is now officially open to public comment. For the next four months, the FCC will hear the concerns of American consumers before returning to another vote on a revised draft of the legislation.

To find out more about what the implementation of the regulation would look like, GlobalPost spoke with Josh Levy, campaign director for Free Press, an organization that works to restore net neutrality, fight surveillance, curb media consolidation and promote press freedom. The exchange below is a direct transcript of that correspondence.

GlobalPost: How exactly does this new web economy break down? It's being said that a controversial rule within the larger proposal would open up the possibility for Internet service providers to charge websites for higher-quality delivery, what would that look like?

Josh Levy: The proposed rules would allow for ISPs like AT&T, Comcast and Verizon to create a two-tiered Internet: A fast lane for companies that can afford it, and a dirt road for the rest of us. The Internet is a zero-sum game; if you speed up some content, you have to slow down other content. This means that while those who pay extra will get extra-special treatment for their videos and content, other online content will be degraded.

GP: Is there any other language within the larger proposal that consumers should also be considering — anything that creates protections or, on the contrary, more vulnerability?

JL: Not really. The FCC is attempting to create consumer protections without reclassifying broadband as a telecommunications service. As we've seen over the last decade, every time it tries to do this their rules or lawsuits get thrown out in court. The only way to provide lasting protections that withstand legal scrutiny is to reclassify.

GP: What would the implementation of this rule do for businesses/websites and Internet service providers respectively?

JL: It would kill the ability for startups and entrepreneurs to compete. And it will kill the ability for advocacy organizations to get off the ground. Anyone who depends on a free and open Internet — with all content treated equally — will suffer because they won't be able to pay extra to get preferential treatment. ISPs would do great, since they'll make even more money by squeezing Internet users dry.

GP: Is this a necessary move — is anyone suffering without the new rules?

JL: Yes, without rules ISPs can, and do, discriminate at will. The only way to protect Internet users is to reclassify broadband and pass rules preserving net neutrality.

GP: Is there any benefit at all to consumers?

JL: No, if these rules were passed it would be a net loss to consumers.