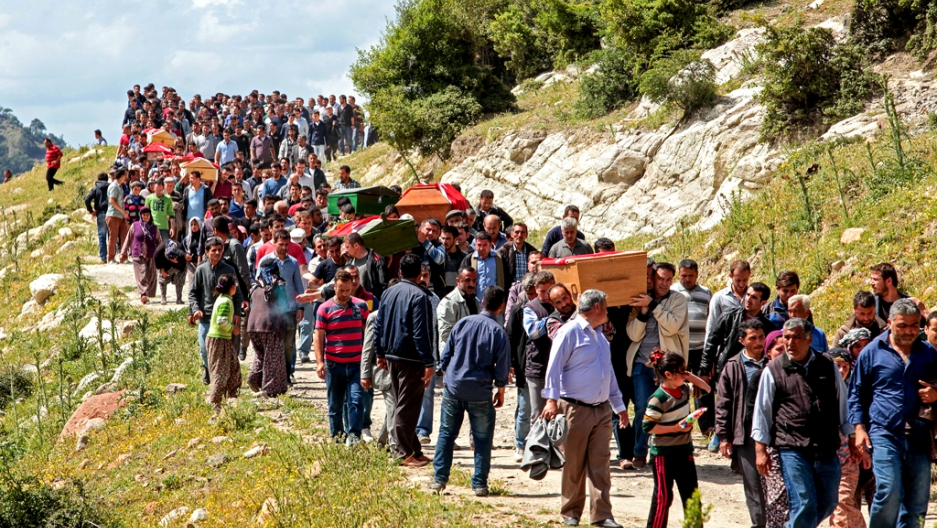 People carry the coffins of the miners to the cemetery after a mining disaster on May 15, 2014 in Soma, a district in Turkey's western province of Manisa.
Credit: Ahmet Sik
Share

The confirmed death toll in Turkey's eastern mining town of Soma stood at more than 280 on Friday, and there was little hope of survivors among those left trapped after an explosion and fire in a coal mine three days ago.

Around 790 miners were in the mine when the explosion happened, and of those 363 have been rescued.

The mining accident is the worst such disaster in Turkey's history, and has sparked outrage across the country.

One banner in Istanbul read, "It's not an accident, it's murder."

The owners of the mine and government officials have for the most part shrugged off responsibility for the incident, according to the Associated Press.

The mine operator denied negligence, and said operations would continue in the mine, according to Turkish news site Hurriyet. The operating manager admitted that a "refuge chamber" that could have saved lives had not been constructed in the mine.

"Legally, we don't have an obligation to build a refuge chamber. But we would have completed it in three-four months if this accident hadn’t happened."

Around 1,500 anti-government protesters gathered in Soma on Friday. Riot police used tear gas and water cannons to disperse them.