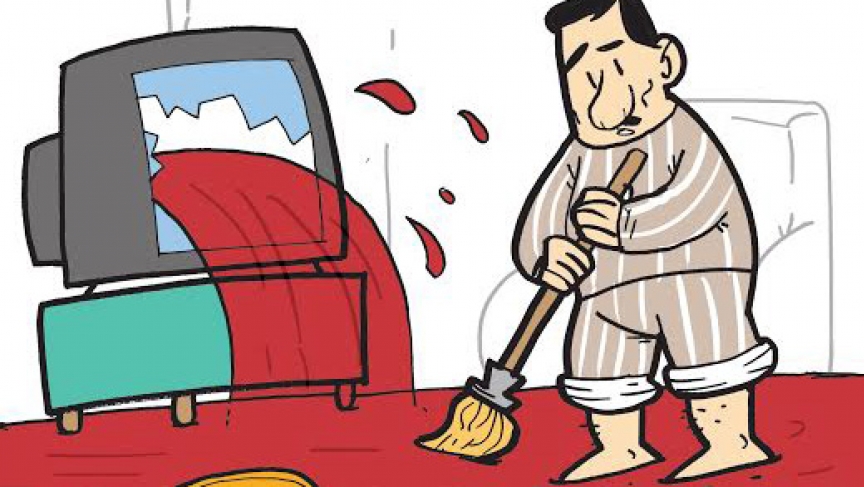 In February, 2014, following two weeks of terror attacks in Egypt, including massive car bombs, Anwar drew this cartoon with blood flowing out of a cracked television screen to illustrate the deadly news being delivered in every broadcast. The homeowner in pajamas mops up the flood of red liquid.

When you come of age in the heady days of Egypt's 2011 revolution, everything seems possible. Or seemed. That's the case with Anwar and Andeel, two 20-something political cartoonists with huge followings in Egypt.

"These artists were studying to mock Mubarak in the late 2000s," says Jonathan Guyer, a writer and scholar who specializes in Egyptian satire.

"[Anwar and Andeel] were some of the first artists to take on the Mubarak regime and learned all these tricks and workarounds. So by the time the 2011 revolution happened, and they see their cartoons as graffiti in Tahrir Square and they see their cartoons on placards at protests, they are revved up and they're drawing a frenetic body of work that basically challenges all authorities, all political elites."

Guyer has just published an article about Anwar and Andeel in the arts and political journal Guernica.

Anwar and Andeel both worked for a well-regarded Egyptiain newspaper, Al-Masry Al-Youm. But Andeel left last fall, after getting frustrated that so many of his cartoons were being rejected. Now, in addition to his cartooning on Facebook and for galleries, he's a writer for Egypt's funny man, Bassem Youssef.

He also publishes, with Anwar, an Egyptian comic zine called Tok Tok, after the motorcycle cab common across Egypt. "They have a comic book launched tonight. It's their 11th issue," says Guyer. "It will be packed. There will be hundreds of young Egyptians there celebrating new comics."

What makes Anwar's and Andeel's cartoons so popular is that they're not overtly political. Instead they deal with daily life in Egypt, which can be quite challenging.

"Andeel's style is very bright and he uses some computers so his lines have a distinctive thick look to them," says Guyer. "But it's his punch lines. They're naughty."

One of Guyer's favorites shows two people at a party. "This guy's picking up a girl and he says: 'Hey, are you a fascist too?' That might sound silly but at this particular moment when everyone was supporting the military regime, Andeel was willing to ask what it meant to support a regime that was breaking up protests with brute force."

Guyer says at that same moment, octogenarian cartoonists at Egypt's official newspapers were drawing the military as the absolute savior. "Andeel's willing to question actors at every single level of the Egyptian political sphere."

But in the uncertainty that is Egypt today and the expected victory of Al-Sisi in the upcoming election, how long can Anwar and Andeel get away with what they do?

Guyer says he sees Anwar and Andeel as the guys who will be writing TV shows, being news anchors, and on radio.

"They'll incubate a whole new generation, just as they were incubated in the last years of the Mubarak regime and learned how to take on authority," Guyer says. "I imagine that the young folks growing up today are looking at these cartoons and saying, 'hey, we can do that!'"