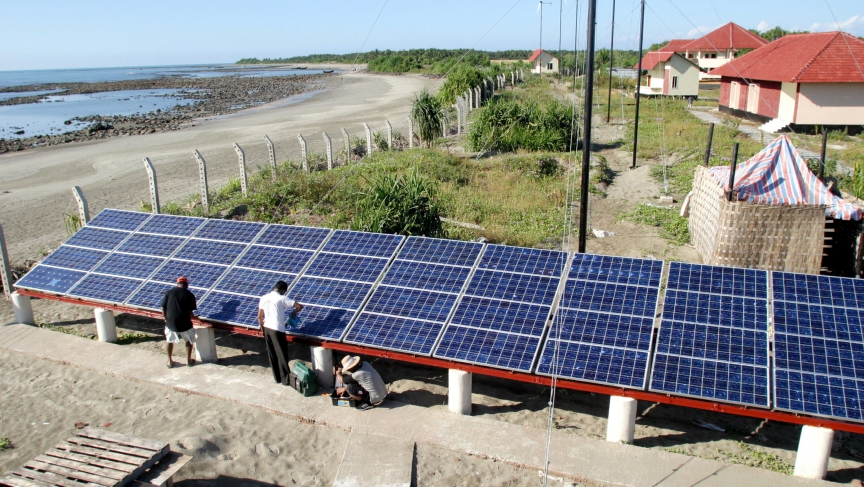 Bangladeshi experts fix a solar panel as part of efforts to maintain bio-diversity in the area and develop eco-tourism on Saint Martin Island on November 29, 2004.

Bangladesh is known for its garment factories and the sometimes-squalid conditions that its workers face. But perhaps when we think Bangladesh, we should think solar energy.

Bangladesh has vaulted to be a leader in the installation of small-scale solar energy. And it's mostly been out of necessity. In a country that grew by 20 million people in the last 10 years, the demand on the electric grid is high — so high that it's not always reliable.

And that has led people to purchase their own electricity-generating equipment, often in the form of solar panels. The Atlantic reports there are some 2.8 million solar installations in the country now.

In the face of criticism, Qatar promises reforms to its labor system

Qatar has been under fire recently for the migrant labor system it uses to keep its country running. The system, known as the kafala, binds migrants to their employers. They can neither leave the country nor get a new job without the blessing of the employer who brought them to the country.

But in the face of reports of worker abuse and protests as Qatar prepares to host the World Cup in 2022, the government is promising reforms. As The Guardian reports, many wonder if the reforms will be in name only, or if the country will really change the way it treats migrant workers.

In Tunisia, you can become a virgin again

Tunisia is a country with liberal ideas and conservative morals. And nowhere is that more evident than in the country's views on sexuality — specifically, as they relate to women.

Men boast, as young men do in many countries, of their sexual escapades with many women. But when it comes to settling down, they're only interested in women who are "untouched" — who are virgins.

And that tension is playing out in doctors' offices, where Tunisian women are going to be "re-virginised." The procedure involves repairing a woman's broken hymen, so her prospective husband doesn't realize she might have had sexual relations previously. PRI's The World looks at the tension this trend is causing in the country.

No, you can't come to the Colorado Symphony's 'Classically Cannabis' concert series

From Uruguay to Colorado, governments and organizations are struggling with determining how to implement new regulations legalizing the consumption of marijuana. In Denver, the Colorado Symphony Orchestra saw the new legalization as a perfect platform for much-needed fundraising. City officials thought differently.

The symphony invited people to bring their newly-legal marijuana to a "Classically Cannabis" concert series. City officials responded by saying the public invitation ran afoul of state law. So the orchestra decided to turn the events from public performances to private events. The events will go on, but you'll have to know someone to be invited. The Denver Post looks at the disagreement between the orchestra and the city, and the orchestra's decision to change its tune.

Huy Fong's Sriracha sauce is the most popular hot sauce in the US — but it is less popular with its neighbors. On Wednesday, the Irwindale City Council is set to consider whether to declare the hot sauce factory a public nuisance. But it is likely the measure will be delayed another two weeks, ensuring that the hot sauce controversy keeps right on going.

PRI's The Takeaway looks at what brought Huy Fong Foods to this point with the city of Irwindale, as well as what some of your options may be if the factory closes and its Sriracha sauce leaves store shelves.

#Turkey's PM on #Soma "accidents are part of miners' fate. death comes with the territory in this line of work" pic.twitter.com/HjposznU9z

Meteorologists are out with their forecast for the 2014 hurricane season. And it looks like it will be less active than usual, just like last year. According to AccuWeather, just 10 named storms are expected, with five of them hurricanes, two of which could be major. In a typical year, there are six hurricanes, three of which are major. Last year, there were just two hurricanes and none were considered major.