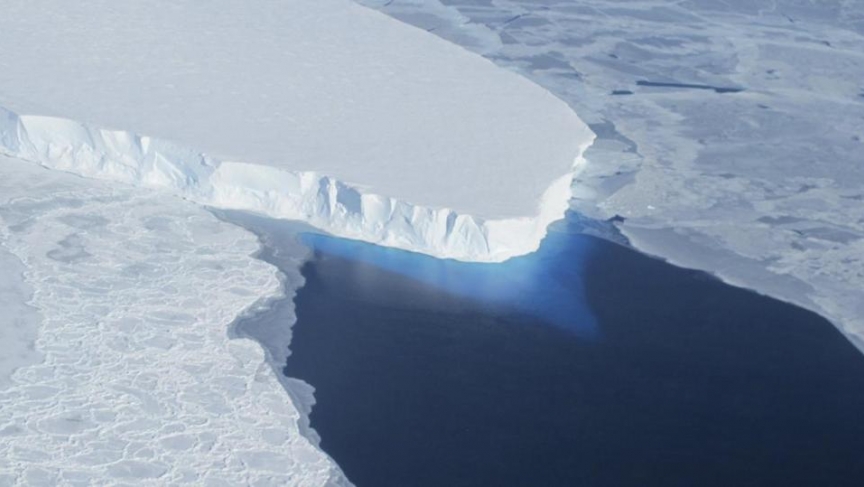 This story is not about the opening scene from the movie "The Day After Tomorrow," when a giant chunk of Antarctica suddenly slides into the ocean, triggering a global climate catastrophe.

But the fact that the massive West Antarctic ice sheet is starting to collapse is sobering, to say the very least. Two new studies out this week say the collapse may be slow, but it's unstoppable now, and will contribute to rising sea levels.

Robert Bindschadler, a former Antarctic field researcher with NASA, says studies of the West Antarctic ice sheet confirm what he and other scientists have suspected for some time.

Bindschadler says both studies rely on scientific evidence collected in Antarctica over a period of years. The NASA study in the journal Geophysical Research Letters, which focusses on the continuing retreat of the grounded ice sheet and where the floating ice shelf begins, relies on satellite radar measurements from 1992 to 2011. The other study, published in the journal Science, models how the ice sheet collapse will evolve in the future. It makes use of satellite data as well as field data collected in Antarctica. Together, the studies "give us a better understanding of how the dynamics of this ice sheet work and how the ocean is driving this retreat," Bindschadler says.

In short, the studies found, the collapse of the West Antarctic ice sheet is underway and is unstoppable. Bindshadler compares the situation to a runaway train. "That's the real alarm that these two studies highlight. There is likely no stopping of this phenomenon now. It's because these glaciers, when they retreat, when they're a glacier that sits on a bed below sea level, so the ocean always has access to the edge of the ice sheet. It can pause and be quasi stable if it's sitting on a high spot in the bed, the ice sheet is kind of hanging onto a high spot on the bed and then it will retreat rapidly to the next high spot in the bed upstream. Well, there are no more high spots, that's what makes this retreat unstoppable."

Bindschadler says this area of the Antarctic ice sheet is already contributing to the current rate of sea level rise globally, which including all sources is a little bit more than about three millimeters (or .12 inches) per year. But that rate is increasing. This ice sheet is going to be losing mass faster and faster and faster. So the rate of sea level rise is going to be increasing.

He says the concern is that sea level rise just raises the launching pad for everything bad that the ocean does, tidal waves, hurricanes and storm surges. A rising sea level is going to make all those storms more damaging — because sea levels will be higher.