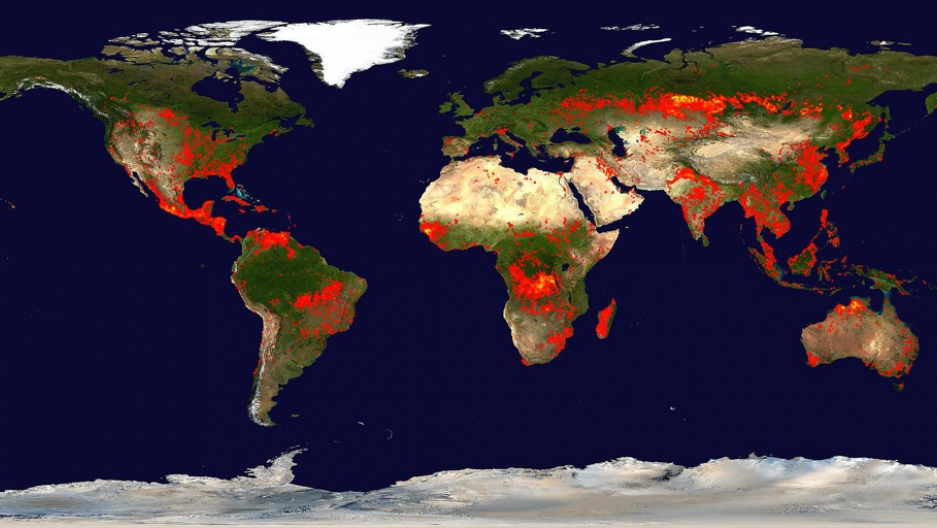 Forest fires around the world from May 1-10.
Credit: Jacques Descloitres/NASA
Share

LIMA, Peru — The world’s forests are in trouble. If you think we’re joking, then just take a look at the frightening NASA image above.

Based on satellite data, it shows how much forest around the world was on fire during the first 10 days of May.

No one really knows this for sure. Some nations, such as the United States and Brazil, publish detailed data, while others, such as Congo or Russia, do not.

What scientists are certain about is this: Wildfires are getting worse with climate change, in the United States and much of the world.

To be clear, the dots on the NASA map are not to scale — otherwise most of Central America (seen below) would just have burned down, and you probably would have heard about that if it were true.

Although most wildfires are caused by people, some also start naturally, by lightning. Some will even lead to new, healthier forests springing up from the ashes.

But, overall, the news could hardly be worse. A slow-burn catastrophe, if you will.

Forests provide humans with a long list of critical services, not the least of which is making oxygen. According to one conservation group, each tree exhales about 120 pounds of the life-giving gas per year.

“The rainfall patterns that are so important to the agriculture that sustains the human race around the world depend largely on forests,” says Steve Schwartzman, director of tropical forests at the Environmental Defense Fund.

It would be a “safe bet,” he adds, that without forests there would be famine.

As if that weren’t clear enough, he cites a recent study that shows that Californian agriculture would be hit by drought if the Amazon, which generates precipitation that falls in many distant corners of the globe, disappeared.

As well as warehousing more than half of all the planet's animal and plant species, forests also soak up the carbon emissions that trigger climate change.

Steven Running, an ecosystems and conservation professor at the University of Montana, says: “Forests currently absorb about a quarter of fossil fuel carbon emissions. In other words, atmospheric carbon dioxide would be rising faster if forests weren't helping us out. We better hope they keep doing so.”

Experts estimate that humans have already destroyed roughly half the Earth’s forests.

That process is continuing, from Florida to Siberia and Indonesia to Ecuador. The University of Maryland has even calculated that since 2000, we have been losing 50 soccer fields' worth of forest every minute.

With flames or chainsaws, humankind is clearing forests to make way for homes and freeways, farms and golf courses, and a host of other infrastructure.

Maybe we should think about putting those fires out.