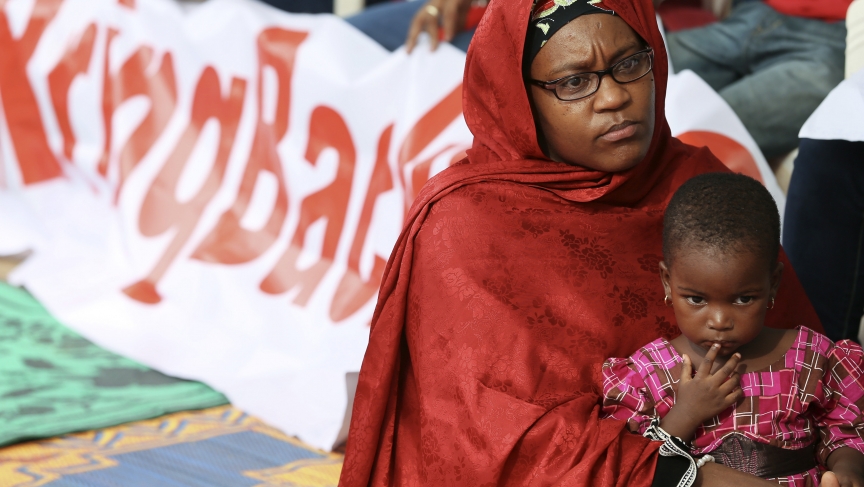 A mother and her daughter join protesters in a sit-in protest demanding the release of abducted secondary school girls in the remote village of Chibok, opposite Maitama park, in Abuja May 10, 2014.

Back in 2004, more than 1000 people, including 777 children, were taken hostage by Chechnyan militants from a school in Russia.

The event, which became known as the Beslan School Seige, shocked the world. There was a strong response from the Kremlin. The international community and the media watched anxiously as Russian troops took three days — what seemed like a lifetime then — to rescue most of the hostages.

And yet, it has been nearly a month since more than 200 girls were taken from their school in Nigeria by Boko Haram, a terrorist group of Islamic militants. In the past four weeks, we've seen this tragic story, once invisible to much of the world, slowly emerge to a major point of international concern.

According to bell hooks, (Ed. Note — hooks spells her name without capital letters) a pre-eminent black feminist, author and social-activist, the missing Nigerian girls are pawns in a larger struggle against a government structure that has failed the people of Africa — and maybe even the world.

"Overall, it's about a struggle for nation-state power and who's going to be in control," hooks says. "It's interesting that the bodies of girls become the violent territory. It's clearly something that's getting the attention of the world because of it being every parent's fear—the loss of a child. It's tapping into intense emotionalities around the world."

While this might be every parent's worst nightmare, hooks says that when examining the search for the girls, one key difference stands out: race. She says these Nigerian girls are part of a group easily ignored by society — young, black women. And for hooks, this tragedy is not simply about black girls being kidnapped, it's about black girls becoming a battlefield for political groups, jockeying for control of the country.

"'Feminism' is often blamed for chaos in many countries, as though the chaos of imperialism or capitalism or other forms of domination isn't enough," she says. "Behind all this, of course, is the blaming of those women and men who have struggled to make education possible for girls in the world."

Many feel global institutions have failed Nigeria's missing girls. But when it comes to addressing society's deeper issues with both gender equality and racial equality, hooks says there is still a long way to go both internationally and at home in the United States.

"People don't want to accept that we're not very far along on the road to gender equality," she says. "Even in the states — we have much more gender freedom than the rest of the world, but we don't necessarily have gender equality. We have much more of a class-driven gender freedom. That is to say, the higher your class as a woman, no matter your race, the more likely you are to have things that we would call freedom or liberation."

When people in the West comment on the tragic situation unfolding in Nigeria, an alarm goes off for hooks.

"I hear the same old cultural imperialism that has allowed us to ignore, for example, the trafficking of girls in this society," she says. "The trafficking of girls in this society is primarily of black and Latina girls starting at age 13. But people tend not to point to that as a sign of what's wrong with our country, that there should be all of these girls being driven to prostitution or slavery or murder because they are really a non-visible class. That's part of what makes the Nigerian situation so stunning to the world — you've taken a class of people that are normally invisible and brought them into a certain kind of visibility."

"We can't just focus on these things and be aware of them — that means nothing if we're not making some step towards change, challenge, and transformation," she says. "Most people don't want to take that step, but they'll take the step of being aware and saying, 'Oh, isn't that terrible,' without thinking how we're all implicated in this."

The intersection between what's happening with Nigeria's missing girls and the larger question of the nation's economic survival are closely linked, says hooks. She says that when these schoolgirls went missing, Nigeria was in the process of announcing that it was developing a better economic program for the country.

When it comes to the role the U.S. can play to combat Boko Haram, attacks on women, and aiding the society at large, hooks says the United States must first look inward.

"I would look first and foremost for the United States to own its own culpability in having similar problems on different scales," she says. "If we only act as though we can be the saviors, rescuers, helpers, then we're just reproducing an old colonial model."

"Everywhere in this nation, black girls, black females are disappearing or being battered and murdered," she says. "Our nation actually isn't doing anything, so how can we then dare to assume that we can help Nigeria solve its problem?"

Many may counter hooks' stance by saying that the United States should not police the world. hooks says we as a nation need to also assume responsibility for societal wrongdoings here at home.

"[I'm] not at all blaming but really holding the US accountable for what goes on in the US," she says. "A lot of times when we are focusing on other countries, we're obfuscating and turning away from what is actually going on in the country that we live in. I'm much more saying let's look at the link between the violence against girls in Nigeria and the violence against girls here in the United States, particularly black girls [here]."