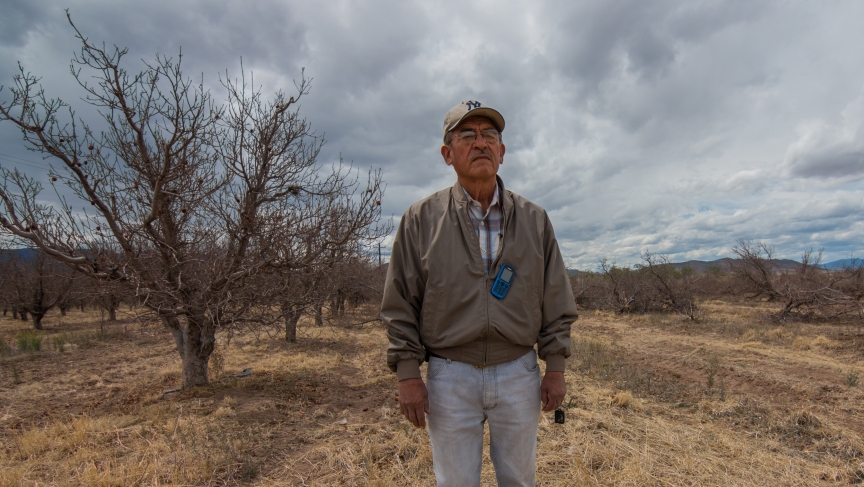 Vicente Robles in his apple orchards in Bachíniva, Chihuahua.

After 50 years in the apple business, Vicente Robles from the Mexican state of Chihuahua is cutting down most of his orchards. The trees are still productive, but no longer profitable.

“We were very happy,” said Robles. “The harvest was coming well after two years of not having one.”

But their bumper crop came after a year of record imports of American apples. By the time the Mexican growers were ready to sell their fruit, markets were already filled with apples from up north.

Isaí Gómez is a second-generation apple grower in Bachíniva, Chihuahua.

“We had to give up on the markets and sell to the juice industry,” he said.

Gómez said the juice companies paid him less than a third of what it cost to produce the apples. Now, growers can’t pay their workers or their bills.

Vicente Robles also refrigerates apples for a lot of local growers. He owes the electric company $138,000.

“This has turned out to be a tremendous bust,” he said. “It’s like a snowball that was up above us and grew and grew as it rolled down the hillside.”

Chihuahua’s apple industry — which employs about 35,000 people and accounts for 70 percent of Mexico's apples — tried to get the Mexican government to suspend US imports.

In February, growers staged what they called a “survival march.” Others dumped apples in the streets in protest. The Mexican press was sympathetic. A local newspaper headline read: “Gringo apples: Ugly, Old and Cold.”

Mexican Senator Patricio Martínez from Chihuahua tried forcing federal action — he did it standing on a box of unsold apples on the senate dais in Mexico City.

“Someone from outside our country wants to do away with Mexico’s apple plantings, so that Mexico will become dependent on their production, at their prices and their conditions,” he said.

He also accused the US of illegally “dumping” — selling apples at a price lower than production.

Up in Washington State, they see the situation much differently.

“We really feel there is room for both industries in the market,” said Rebecca Lyons, the international marketing director for the Washington Apple Commission. She said they did sell a lot of apples in Mexico last year, but that’s because Mexico had so few apples of its own.

She said Mexican growers also caused some of their own heartache — they grew too many apples.

“Everyone just harvested everything they could, they didn’t thin. They didn’t use good management practices,” said Lyons. “They have to do something to help themselves.”

They’re asking the government to block US imports around harvest time to give them more of a chance to sell their apples. But US government officials say that would violate the terms of the North American Free Trade Agreement, or NAFTA, which took effect on January 1, 1994.

Laura Carlsen, director of the Americas program at the Center for International Policy, calls NAFTA “a straightjacket.”

“What it does is it strips the government of a series of very important development tools that the United States, of course, had during its period of development,” she said. “These include the ability to protect strategic sectors. And if there's any strategic sector, the production of basic food would be one. All the deck is stacked against these small [Mexican] farmers. But in the end, everybody’s going to pay the price.”

Since NAFTA was signed, countless Mexican farmers have been driven out of business and have crossed the US border illegally looking for work up north. Others have remained in Mexico and turned to the drug cartels, which are always recruiting.

Apple growers in Chihuahua are hoping to avoid that fate. But it might be tough. Back at Vicente Robles’ packinghouse, he points to the dregs of the failed season: crates of tired yellow apples.

“There is a feeling of powerlessness,” he said. “I’m 71-years-old. I’ve spent my whole life working here. And now, I’ve arrived at this point and my orchards don’t even give me enough to live on.”

He says it’s sad, but he has to be practical. And move on.

Apple grower Isaí Gómez vows that he won’t go down without a fight. He’s teaching his sons to defend the countryside.

“They should defend it and I’m going to help them,” he said.

He says they’re fighting for not just their livelihood, but their way of life.

This report was produced in collaboration with the Food & Environment Reporting Network, an investigative reporting nonprofit focusing on food, agriculture and environmental health.