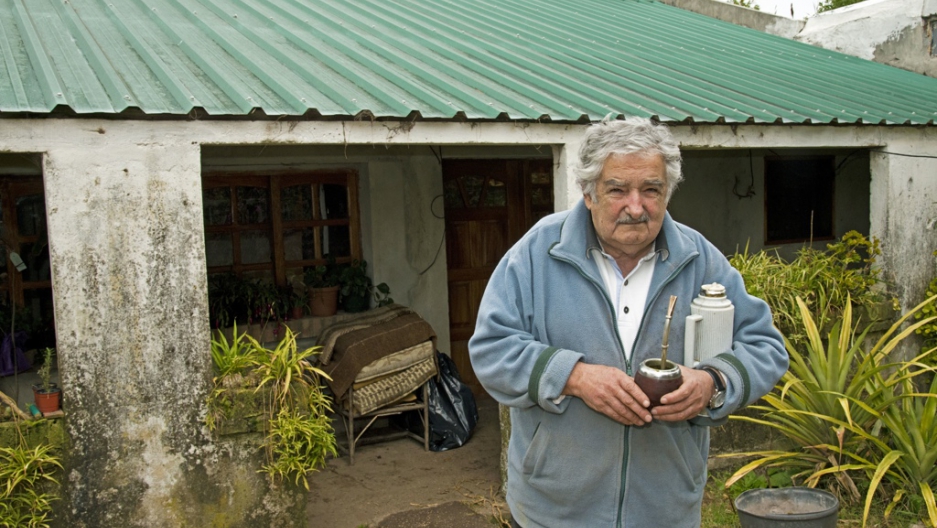 It may not seem like it, but this guy, Uruguayan President Jose Mujica and Barack Obama have a lot to talk about.
Credit: Mario Goldman
Share

MONTEVIDEO, Uruguay — President Jose Mujica of Uruguay, a man famous for driving an ancient Volkswagen Beetle, wearing sandals to meetings and supposedly being the world’s poorest president, plans to meet with President Barack Obama at the White House on Monday.

Don’t expect a state dinner with caviar and Mary J. Blige. But this powwow comes with an even more fascinating backdrop.

Uruguay has just become the first country on the planet to legalize the cultivation, sale and use of marijuana, enacting a sweeping law that goes far beyond the legalization efforts of US states like Washington and Colorado.

Meanwhile, Mujica recently agreed to accept five detainees from the Guantanamo Bay detention center, a facility he has publicly criticized.

And the meeting comes at a critical time for Latin America. With an ongoing bloody conflict in Venezuela and with the economies of Brazil and Argentina sputtering, the region has its fair share of problems that Mujica will likely be keen to discuss with the world’s most powerful man.

Let’s take a look at five likely topics of conversation between Obama and Mujica.

Uruguay’s radical shift on marijuana is an ostentatious rebuttal to the US-led “war on drugs.”

In the run-up to legalization here, supportive politicians continually referred to the US’s efforts to combat narco-trafficking in the region. They pointed out that widespread drug violence in countries like Mexico and Colombia has had little corresponding effect on America’s drug habit and just made life more dangerous for the residents of those countries.

By offering marijuana for sale by government-licensed growers in every neighborhood, Uruguay hopes to bring weed “out of the shadows,” as officials have said, and to prove there’s a better approach to regulating drug use.

The basic idea is to loosen the narco-traffickers’ grip on the drug trade, thus forcing them to abandon Uruguay as a market for both weed and other, harder drugs. At the same time, by offering pot for sale in stores instead of street corners, the government hopes to minimize young people’s interactions with criminals.

The United Nations condemned the move shortly after the law passed for breaking Uruguay’s international treaty obligations. The White House’s reaction, meanwhile, has been muted.

Mujica may choose to use his meeting with President Obama to further lay out his support for legalization and his opposition to American “imperialism” and the failing war on drugs. For Obama’s part, the US president may want to know more about Uruguay’s future plans for drug policy.

There was a bit of a flap in Uruguay last month after Mujica casually announced that his administration had accepted a request from the US to receive five prisoners soon to be released from the Guantanamo Bay detention center.

Mujica, himself a former political prisoner, said the plan was to help out the United States, which had approached Uruguay as a possible host country for former prisoners. But then he went further, saying that the detainees would be allowed full freedoms, including the right to travel onward from Uruguay, after they arrived here. And then he went further still, saying that he planned to ask the US to release Cuban political prisoners in exchange for receiving the men from Guantanamo.

That set off a wild round of diplomacy here, with the US ambassador stressing that talks were still very much underway, while officials in Washington quickly quashed any idea of a prisoner exchange.

Mujica may choose to use the meeting to press home his clear distaste of Guantanamo Bay and, possibly to raise the issue of the Cuban prisoners again.

Obama needs all the international help he can get to shut down the controversial Guantanamo jail and fulfill a key campaign promise. He may want to learn more about the legal and political future of the Guantanamo detainees once they land on Uruguayan soil, as well as the possibility of sending more prisoners here.

While we’re on the subject of Cuba, Mujica, a good old-fashioned lefty who’s in the habit of handing out Cuban cigars to visiting dignitaries, may want to confront Obama about the US’s ongoing embargo of the island nation.

For months now, angry protesters have been hitting the streets in Venezuela’s main cities. With the country wracked by spiraling prices and a shortage of food and basic necessities like toilet paper, Venezuelan crisis could continue simmering for some time.

This is one issue where Obama and Mujica are extremely divided.

Mujica has voiced his support for Venezuelan President Nicolas Maduro, while also denouncing “foreign interference” in the country’s affairs — a clear dig at the United States.

Mujica has also publicly stated that he intends to use the May 12 meeting to point out Obama’s “gross errors” in Latin America.

Obama, meanwhile, has expressed serious concern about Maduro’s treatment of Venezuelan citizens, and US Secretary of State John Kerry has publicly chided Maduro’s handling of the protests. The US president has so far ignored Maduro’s request for a dialogue between the two countries.

We’ll see if Obama and Mujica can find some common ground on this issue.

In addition to accepting prisoners from Guantanamo Bay, Mujica’s government recently announced a desire to house dozens of child refugees from war-torn Syria.

Uruguay’s foreign minister is currently working with the UN High Commission for Refugees to make the plan a reality.

Since his strongly worded speech on Syria last September, Obama has been pretty quiet on this issue. Last year, Mujica voiced his opposition to military intervention in the country.

We’ll see if his recent interest in refugees from Syria has changed Mujica’s stance on the conflict.

Uruguay is currently the United States’ 93rd largest goods trading partner, according to US government data. In terms of imports to the US, Uruguay ranks 110th in the world. Key exports from the South American country include beef and soybeans.

Here are some nifty charts illustrating the countries' bilateral trade by atlas.media.mit.edu.

Certainly, Uruguay could benefit from increasing trade with the US. Exporting more goods like beef and agricultural products would offer a shot in the arm for an economy that is being heavily impacted by poor performance in neighboring Argentina and Brazil.

(Via tobaccofreekids.org and the Tobacco Labelling Resource Centre, University of Waterloo.)

The Uruguayan daily El Pais reported last month that Mujica will also use the meeting with Obama to ask for US help with a long and costly lawsuit the country is fighting against tobacco giant Philip Morris.

In the landmark case, Philip Morris claims that the Uruguayan government’s requirement to post graphic images of cancer victims on its cigarette packs violates the company’s intellectual property rights.

The paper quoted former President Tabare Vasquez (who is currently running for election again) as saying the company is using Uruguay as a “test case” to scare other nations from passing similar laws.

El Pais said the issue has been placed on the agenda for Monday’s meeting.