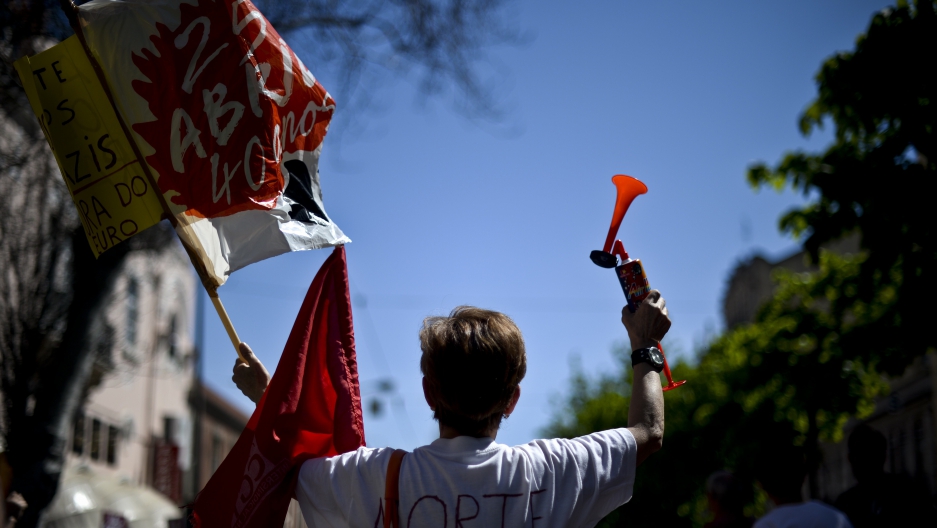 Thousands demonstrated in Lisbon against the government's austerity measures on May Day this year.
Credit: Patricia de Melo Moreira
Share

LISBON, Portugal — Just a few months ago, you could have raised chuckles from financial experts by suggesting this country’s finances might soon be healthy enough to break free from the straitjacket of austerity imposed by international creditors.

He said next week Portugal will exit the program under which the European Union and International Monetary Fund have overseen economic policy. The creditors have kept a close watch to ensure compliance with the terms of a $108-billion bailout agreed in 2011 to keep the country solvent at the height of the euro zone debt crisis.

Passos Coelho's announcement that Portugal no longer has to rely on the EU/IMF rescue money came alongside a spate of good news from the southern European countries hardest hit by the crisis.

On Tuesday, Spain revealed that 111,565 people had left the ranks of the unemployed in April, one of the biggest monthly falls on record. The day before, the European Union predicted the recession-dogged economies of Italy, Spain, Portugal and Greece would all return to growth this year.

"The recovery has now taken hold," Siim Kallas, vice president of the European Commission, told a news conference Monday in Brussels. "Deficits have declined, investment is rebounding and, importantly, the employment situation has started improving."

In Greece, the epicenter of the crisis, the EU expects the economy to grow for the first time in five years. Last month, Athens ended a four-year exile from bond markets, with investors lining up to purchase $4.2 billion worth of debt.

Investors who once bet the economic collapse of Spain and Italy would destroy the euro are now clamoring to buy those countries’ bonds, pushing borrowing costs to record lows. Portugal sold 10-year bonds at 3.57 percent last week, down from more than 17 percent two years ago.

Exports and tourism are booming in Portugal and Spain. After years of running current account deficits, Italy, Spain and Portugal are all expected to see more money come in than goes out this year.

Across Europe's troubled sunbelt, there are signs of a tentative recovery from the crisis that threatened to tear the euro zone apart.

The muted tone of Passo Coelho's announcement on Sunday captured the mood.

"I know many families still face difficulties. I know too that the growth that has returned to the economy over the past year has yet to improve many people's day-to-day lives," he said in a televised speech. "We still have a long road head ahead of us."

More from GlobalPost: A summer of austerity has Europe chillin' on the cheap

The crisis has left deep scars on southern Europe's economic landscape. Greece has seen its economy shrivel by a quarter since 2009. Italy contracted by 7.7 percent over the same period, and Spain and Portugal by almost 7 percent.

Even if Greece manages to spur growth to the optimistic 2.9 percent rate predicted by EU headquarters for 2015, it will still take the better part of a decade just to get back to 2008 levels.

"You cannot yet in the case of Greece talk about an economic recovery," says Jens Bastian, an Athens-based economic and investment analyst.

"What I see are certain positive signs in the financial economy, but they have not yet translated into the Greek real economy," added Bastian, who served as a member of the European Commission Task Force for Greece from 2011 to 2013. "What we are seeing is a stabilization at a rather low point of departure."

There's little sign the millions of jobs the crisis wiped out will be re-created any time soon.

A quarter of the Greek and Spanish workforce will still be without jobs in 2015, according to forecasts published by the Organization for Economic Cooperation and Development.

Prospects are even more dire among young people. More than half of Spaniards and Greeks under 25 are out of work. Many are emigrating. Others are revolting against the political mainstream.

The latest polls show the radical anti-establishment 5-Star Movement has become the most popular party among young Italians. In Greece, the far-left Syriza Party is vying for first place ahead of elections to the European Parliament later this month. The crisis has also fueled support for separatism in Spain's Catalonia Region, which plans a September referendum on independence.

Although southern governments have strived to bring down budget deficits, their shrinking economies have meant the bloated public debts that triggered the crisis in the first place have continued to swell.

Greek debt is seen rising to a staggering 177 percent of economic output this year. Italy's will climb to 135 percent and Spain's to 100 percent, according to EU forecasts.

Of the four, only Portugal is set to see a drop in debt. But at 126 percent, that's still almost double pre-crisis levels.

Zsolt Darvas, an expert at the Brussels think-tank Bruegel, praises efforts by the euro zone's southern flank to knock public finances into order and push through reforms to make economies more competitive, but he’s also among several economists who question the markets' renewed confidence.

"The markets already proved before the crisis that they are not really reliable in assessing risks and I'm not really sure this market optimism is fully justified," he says.

"The improved market environment will make it easier to introduce reforms, but there are still major underlying weaknesses," he says. "The big question is whether this is just a rebound or if more sustainable growth could start."

Many are again looking to the European Central Bank to lend a helping hand.

The turning point in the debt crisis came in the summer of 2012, when ECB President Mario Draghi told an audience in London that the bank would use its massive financial firepower to "do whatever it takes" to keep the euro afloat.

Now southern countries are looking to the ECB to nurture growth by pumping money into the economy.

More from GlobalPost: As violence grips the east, western Ukraine watches ... and waits

Traditionally the central bank — and the euro zone’s superpower, Germany — have been loath to take such action for fear of stoking inflation and weakening the currency's value on international markets.

However, with euro zone inflation at 0.7 percent — well below the ECB's 2 percent target — and a strong euro blamed for dampening exports, many believe the Frankfurt-based central bank has plenty of leeway to introduce some stimulus.

On Thursday, Draghi hinted the ECB could act to raise inflation during its board meeting next month. His comments in Brussels that the ECB was "not resigned" to prolonged low inflation sent the euro tumbling from a 2.5-year high against the dollar.

Regardless of possible ECB action, Athens-based analyst Bastian says the European authorities should act urgently to get affordable credit flowing to Greek companies in order to enable a recovery to take root.

He says Greek exporters are forced to pay about three times more than their German counterparts to secure loans.

Without such measures to boost business, the nations of Europe's south will face a long wait before their hard-pressed citizens enjoy any tangible results.