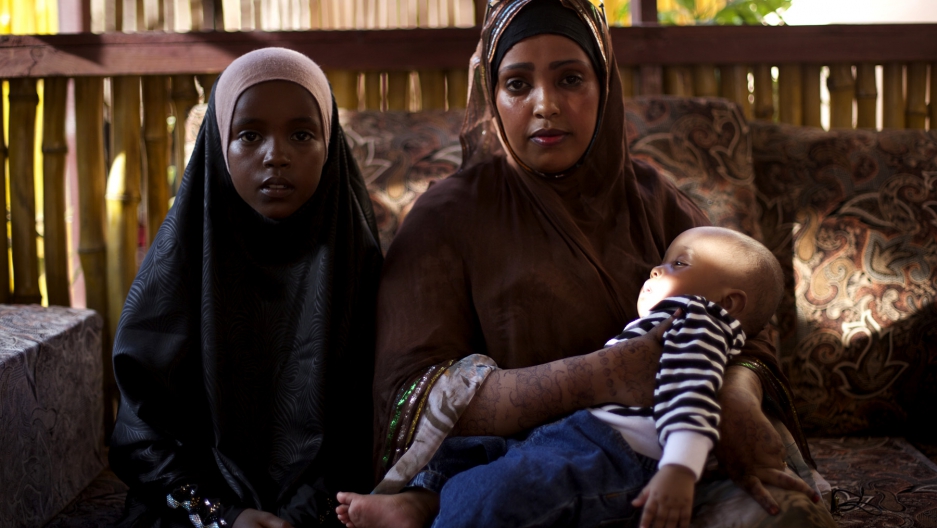 Ifrah Osman decided to return to Somalia after a raid on her neighborhood in Nairobi, and a rise in the price of bribes demanded by Kenyan police.
Credit: Tristan McConnell
Share

MOGADISHU, Somalia — After eight years living in Kenya, Ifrah Osman decided to go home to Somalia, the country she fled in 2006 as the long-running war worsened. In the last few years security has improved in Mogadishu, and some have found hope and opportunity here — but that’s not why Osman went home. She left Kenya because it had become unlivable for her.

For Osman the final straw came at 1 a.m. on a weekday night in late April when Kenyan police raided her apartment block in Eastleigh, a predominately Somali part of the capital.

“They kicked at my door in the middle of the night. I feared they might try to rape me. One of them broke a window but I wouldn’t let them in,” said the 28-year-old businesswoman and mother of two.

She listened as the officers went door to door seizing identity documents from her neighbors then demanding money for their return, or dragging away household items for which the owners could not produce receipts. Extortion marked every step.

In the name of fighting foreign Islamist terrorism, Kenya’s government launched a security crackdown in early April. Osman’s story of the effects of this “Operation Usalama [Security] Watch” is one of the more moderate ones. Human rights groups have criticized the rounding up of thousands of ethnic Somalis. Terrorist attacks have become a regular feature of Kenyan life since the army was sent into neighboring Somalia to fight Islamic insurgents such as Al Qaeda-affiliated group Al Shabaab in October 2011. The mostly low-tech attacks in Kenya — bullets fired into churches, grenades flung at bus stops — are rarely claimed either by Al Shabaab or any other group, but Islamic extremists are routinely suspected.

Allegations of mistreatment, though the government denies them, are numerous. Around 200 Somalis have been deported and hundreds returned to refugee camps in northern Kenya. Hundreds more languish in a football stadium that has been converted into a detention and screening center. Many others are choosing to leave a country they feel no longer wants them.

The harassment and the bribes increased under the new operation, Osman said. “Now it is $20 or $30 or more,” she said. The extortion has eaten into the money she saved to pay school fees and rent. “They are police but I call them thieves.”

So last Wednesday she took her 5-year-old daughter Ismahan and 6-month-old son Mohamed and joined the crowds of Somalis jostling for space on the regular flights back to Mogadishu. A friend in Eastleigh will sell all the stock in Osman’s cosmetics boutique and close up her apartment.

“I’m very angry about what the Kenyan government is doing to Somalis. They are targeting Somalis and also Muslims,” she said. “I won’t go back to Kenya.”

Sipping a glass of freshly pressed mango and papaya juice as shisha smoke drifted across a booth in a Mogadishu restaurant, Osman said she will first find a school for her daughter and then open a new shop.

Adnaan Abdallah, 40, also left when the pressure became too much. A refugee and itinerant laborer, Abdallah was looking for work in Eastleigh when he was swept up in a security dragnet last month and taken to Kasarani football stadium for screening. His wife and three children still live in the Kakuma refugee camp in northwest Kenya, where the youngest was born.

The irony of Operation Usalama Watch is that, though illegal immigrants are swept up in nets intended for terrorists, neither undocumented workers nor genuine terrorist threats are at risk of deportation or arrest if they pay a bribe.

When asked how many times police have stopped him in the past Abdallah laughed, shook his head and said “countless.” But this last time was different: they wanted $70 to let him go, 20 times the usual rate, and far more than he could afford on his earnings of just a couple of dollars a day.

Friends raised the money to buy Abdallah his freedom and a one-way ticket to Mogadishu. Now he's trying to bring his family back, too. “I don’t need Kenya anymore. I just want to get my kids, then I’m finished with it,” Abdallah said.

Though the Kenyan military has been in Somalia for three years, now absorbed into the 22,000 strong African Union Mission in Somalia (AMISOM), the current anxiety about retaliatory attacks within Kenya has a specific source: In September Kenya suffered its worst terrorist attack since the 1998 US embassy bombing:  A handful of militants attacked the Westgate shopping mall killing at least 67 people. Then in late April, a suicide car bomber detonated his explosives outside a police station near Eastleigh, killing two police officers.

The security crackdown is a popular move among many Kenyans, as an op-ed published in the Daily Nation newspaper shortly before the start of the operation made clear.

“It would appear that every little, two-bit Somali has a big dream — to blow us up, knock down our buildings and slaughter our children,” wrote Mutuma Mathiu, the paper’s managing editor. “We are at war. Let’s start shooting.”

But if the aim of the crackdown is to stop terrorist attacks then it is proving a dismal failure. Two explosions in the coastal city of Mombasa on Saturday were followed by two more in Nairobi on Sunday. The weekend toll was seven dead, scores injured.

“It’s absolutely not effective,” Somalia’s Prime Minister Abdiweli Sheikh Ahmed told GlobalPost, discussing the crackdown. “Harming innocent people will only help Al Shabaab and traumatize people and should be stopped. We need to have targeted operations focusing on those terrorists groups,” he said. Ahmed is concerned that Somalis in Kenya are being caught in the middle, between Al Shabaab’s atrocities on the one side and Kenya’s state-sanctioned repression on the other.

A potentially bigger problem is that, by focusing exclusively on immigrants, the crackdown ignores the threat of domestic terrorism while potentially pushing more young men into the arms of extremists — creating the very enemy it fears. The policy is alienating Somalis and Muslims, driving a wedge between them and other Kenyans. It’s also eroding the Somali immigrant support Kenya’s government needs to fight the very real terrorist threat in the country.

“Are all Somalis terrorists? Are children terrorists?” said Abdallah, still angry after his return to Mogadishu. “Kenya isn’t looking for terrorists, they are just fighting Muslims.”