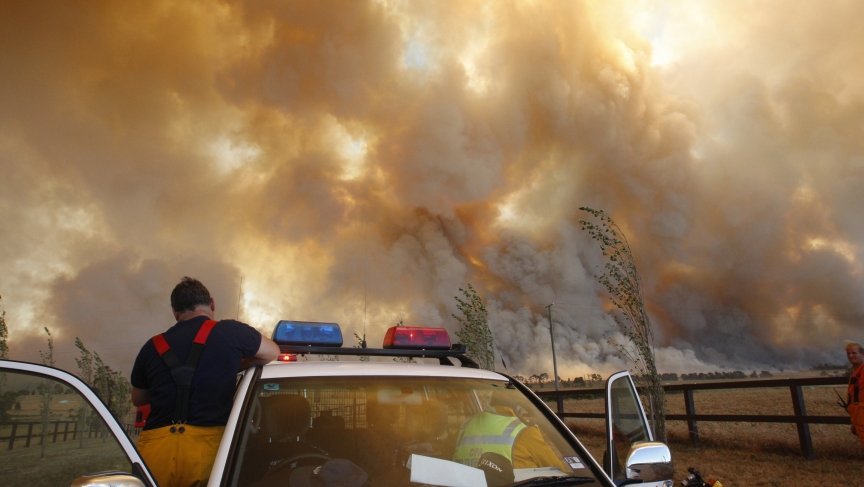 A fireman climbs down from his truck as a bushfire approaches a town outside of of Melbourne, Australia in February 2009. Officials blamed the blazes five years ago on a "once in a century" heatwave. With climate change increasing the risk of fires and other weather-related crises, public health workers are working with firefighters and others to help Australians build their emotional resilience to disaster.

Australia has suffered devastating weather in recent years — droughts, floods, tropical storms and heat waves that many scientists say are a taste of what climate change will bring many parts of the world in the near future.

Natural disasters like these can leave people emotionally shaken long afterwards. Consider what happened after the worst wildfires in Australia’s history — the 2009 “Black Saturday” fires.

The fires struck the Australian state of Victoria after a long drought. The area had just suffered through a three-day heat wave in which temperatures hit 109 degrees Fahrenheit, drying grasslands and forests into ready fuel. The fires destroyed thousands of homes across a wide swath of rural land, and killed 173 people. Climate experts say droughts are becoming more frequent and severe, too.

Lisa Gibbs, an associate professor of public health at the University of Melbourne, says studies of adults in the area three to four years later show about double the prevalence of post-traumatic stress disorder (PTSD) compared to the rest of the population. She and others are gathering data now on children.

Darren Scerri, who works for the state of Victoria, has seen firsthand the need for psychological first aid. Scerri owns what Australians call a hobby farm in one of the towns hit by the Black Saturday fires. He and his children fled just before the flames.

Scerri coaches an Australian-rules kids’ football team, and two of the young players died. “The worst thing about Black Saturday, putting aside the fact that we lost so many people, is the impact it’s having on the kids themselves, through their learning difficulties in schools,” he says.

But counseling comes after a traumatic event. What about reaching kids before a disaster — preparing them psychologically so they will recover more quickly?

Researchers around the world are working on ways to instill psychological resiliency for all sorts of disasters. And the US military, in response to high rates of PTSD in returning soldiers, has implemented a slew of pre- and post-deployment counseling programs that are intended to prevent or lessen severe psychological reactions. A new report from the Institute of Medicine says that while some of these programs work, many have shown only small effects, if any.

Researcher Lisa Gibbs, who is an advisor to Scerri’s nonprofit, wants to develop and validate resilience programs for kids. “You can have a positive influence on recovery if you’re thinking about what needs to be done before an event,” she says. And she believes what is needed to promote psychological resilience in children is education.

“Our hopes are that children who are actively involved in preparedness and have an understanding of how their local environment is responding to climate change will be in a better position to cope if there are major events that occur,” she says.

As part of her research, Gibbs has been observing a program called the Anglesea Initiative. It is led by a local fire-fighting unit in the seaside town of Anglesea, in partnership with the University of Melbourne.  As part of the initiative, firefighter Jamie Mackenzie meets with fifth graders from the local primary school and teaches them about fires. For instance, the children learn that fire travels faster uphill than downhill, and that gullies and valleys change the way the wind blows and the way fire moves.

Mackenzie wants his classes to leave kids feeling in control if a wildfire comes. “If they understand how a fire burns, they can make better decisions,” he says.

“My feeling is if we can get children to have a deep understanding on something that is natural and a part of our world, we’ll have a resilient bunch of kids,” Mackenzie says. They’ll know what a wildfire might do, and thus when to evacuate, and where the best place for shelter is. And if things go badly, they won’t be surprised — they’ve learned that could happen.

The principal of the local primary school, Pamela Sandlant, is pleased with the lessons so far. “Part of building resilience is kids having confidence about what is going on around them,” she says.

A lot remains unknown about resilience, though. If children are trained and prepared as in Mackenzie’s program, will they bounce back more quickly from disasters? Will the same techniques work for adults?

Tony McMichael of Australian National University is a pioneer in studying the health effects of climate change. He wants to see more work on building psychological resilience. “It’s a good thing anyway, in response to all sorts of events which occur naturally,” he says. “But it will become a crucial thing in a world where the risks of physical damage and health disorders increase.”

Support for this story was provided by the Pulitzer Center on Crisis Reporting.