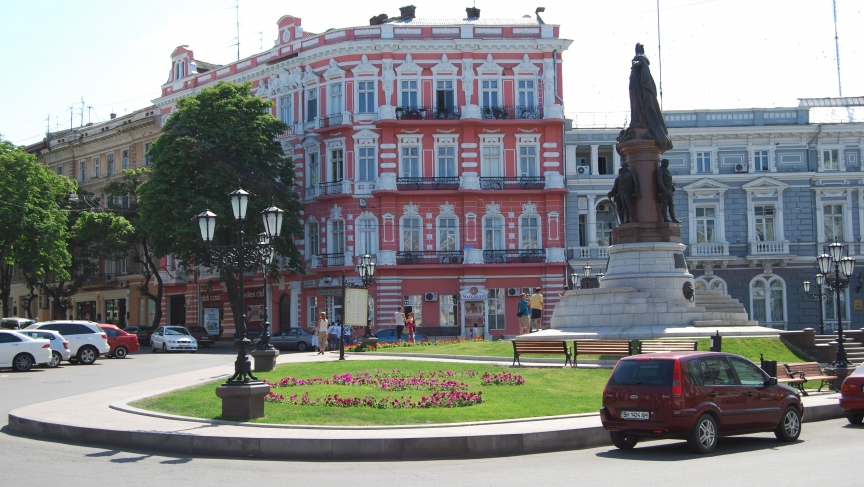 One of the many beautiful buildings and avenues of Ukraine's famed city Odessa, on the Black Sea.

I was in Ukraine in 2008 on a two-week reporting trip and took an overnight train from Kiev to Odessa. Odessa is one of those places, like San Francisco, where people fall in love with the city.

Odessa sits on the Black Sea. The architecture is beautiful — grand, colorful buildings and its famed Potemkin Stairs marking the entrance to the city from the sea. Odessa has gardens and parks and wide walking streets covered by leafy trees. There are great cafes and museums.

It's a mix of people from different cultures — Greeks, Turks, Bulgarians, Russians and Ukrainians, as well as a small Jewish population that was once a significant part of the social fabric. Odessa is the birthplace of many famous writers, poets, musicians and artists. And mobsters. In short, it’s a fascinating, wonderful, cosmopolitan place — one of my favorite cities.

For me, it's hard to visualize the violence happening there now. For weeks now, we have been hearing about masked gunmen in eastern Ukraine taking over buildings and checkpoints in small towns most of us have never heard of before. But Odessa? That’s like hearing about violence coming to Paris.

When I was there six years ago, I was working on a story about humor, specifically the connections between Odessa humor and American Jewish humor. Many early Jewish comedians in the US emigrated from Odessa to New York 100 to 140 years ago.

You can make a compelling argument, and many academics and comedians have, that the style of modern Jewish-American humor — from Jerry Seinfeld to Mel Brooks to Larry David — stems from Odessa, with its neurotic and pessimistic flavor. (Is there any better kind?)

Reporting on humor in Odessa was one of my all-time favorite stories. At first, it seemed a pretty cushy assignment. Basically I'd just go to a few comedy clubs, talk to some writers, have some laughs, and scribble a few notes. Pretty easy, right? Well, not so much.

Take a listen to the story from 2008 — it’s a better listen than a read, since it was made for radio. Or if you insist, here’s the written story:

On a hot, sticky morning, middle-aged women in filthy aprons are taking out their aggression on fish. The women are hurling insults at each other. One woman calls another an old pig. Then a few smile and chuckle.

I’ve come here, the Privoz fish market, the heart of Odessa, to try and learn about Odessa’s humor. To best do that, several women tell me: talk to Larissa. 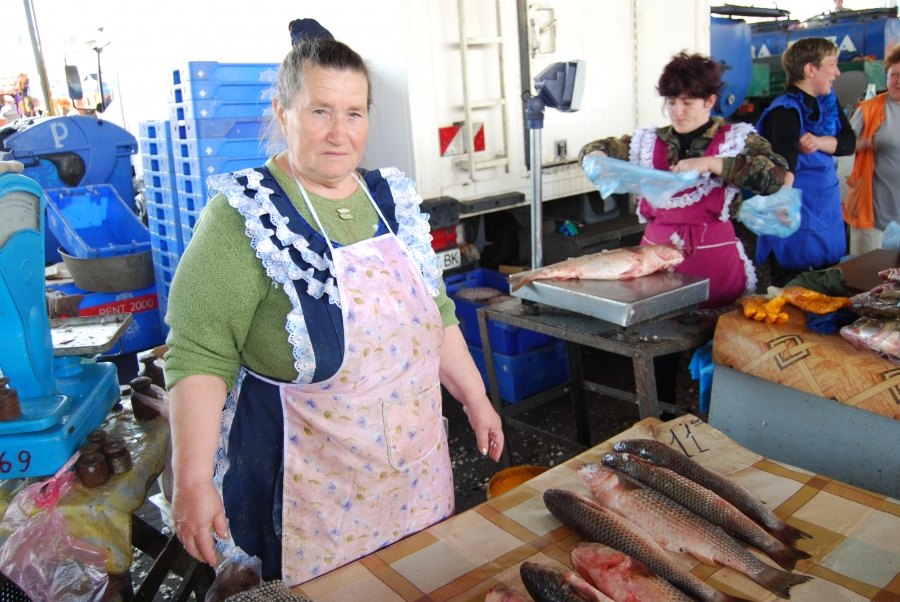 Larissa, a local comedian, of sorts, at the Privoz fish market in Odessa.

Larissa is a sturdy woman with a menacing scowl. But she’s sorta friendly.

She starts to give me a lesson. My intepreter, Sasha Kleimenov, tries to explain.

One inconsistency there: The people aren't nice and pleasant.

Sasha clarifies, “Well, to them, they’re nice and pleasant.”

As I’m asking Larissa a few more questions, in the middle of a sentence, she spots a friend across the market. She yells out, “Hey Masha, you owe me something,” dashes after her and leaves me standing there holding my microphone. Interview over.

I try a new tack and meet up with Zhenya Yakovchenko who works in TV. I ask him to give me an example of Odessa humor, show, don’t tell. He describes a scene from the TV show, “Odessa Prepares Dinner.”

“An old guy, probably Jewish, is walking around in the market touching everything, putting his nose in it,” he begins. “He asks, why do you buy the veal?”

The set-up for the joke went on for a few minutes, with me understanding only bits and pieces. Regardless, I’ll speed things up a bit. The old man says, why don’t you buy pork?

Here’s Zhenya with the punchline: “He turns to the camera and says, ‘She buys veal, she’s short of money.’ You see?”

I don’t get the joke. Zhenya senses that I’m confused.

“Yes. I think it’s funny,” I say, awkwardly lying through my teeth. “It’s a different type of humor than I’m used to.”

(I later figured out, she buys veal because it's cheaper, but she really wanted pork... hilarious stuff.)

Now, I know that humor doesn’t always translate across cultures, but if Odessan humor is the basis of New York humor, and I can safely say that I get New York humor, something isn’t adding up.

I have another idea. I make my way to the comedy club “House of Clowns” and the attached restaurant called “Manah-Manah,” run by Irena Stadnichenko. I explain the problems I’m having. She says it’s not me.

“I’m a fourth generation Odessan,” she says. “There is no more Odessa. Everyone emigrated to other places. Odesssa humor is Jewish humor, Jewish humor is Odessa humor. When the Jews left after the Soviet Union collapsed, humor left with them.

“Now we have these new comedy clubs — these comedians are trying to re-create the same humor, pretending they have the Jewish accent. It’s not the same thing. Odessan humor used to be about making fun of yourself, not insulting somebody else.”

As I’m about to thank her for the interview and leave, she adds one point for good measure.

“Americans, pure Americans born in America, they don’t know how to joke. They’re not funny at all. It’s true, no?”

Thanks for adding that, kick me while I'm down. At this point, I’m feeling a bit, well, deflated.

I report my findings back to Zhenya, the guy who made the veal joke. He assures me that Odessans are hysterical. The problem, he says, is me: I’m not funny.  But there’s hope.

The parting words of encouragement as I’m leaving Odessa: “You’re going to be fun.”

I have to admit, that’s a pretty amusing thing to say to somebody. Maybe these people are pretty funny, after all.