When I traveled across Russia a dozen years ago, it was rare for anyone to wear a seat belt. In fact, drivers were insulted if you chose to buckle up as they sped between other cars.

Now the opposite seems to be true, at least in Moscow.

Vladimir Nagovitsyn, like many Moscow drivers, occasionally uses his car as an unlicensed taxi. He wears a seatbelt and he asks his passengers to do the same. He won’t take dangerous shortcuts, either.

“There’s no point and, at most, you gain five minutes,” he says. “In the end, you’ll just have more problems.”

The Russian police now heavily enforce traffic laws, he says, for everything from not buckling up to carrying a young child without a car seat.

“They’ll fine you,” Nagovitsyn says. “At the same time, these social ads are playing — they say you have to have a car seat.”

Road safety ads are now a regular feature on Russian television. One shows a boy walking through a magical toy shop. The toys all point the way to the best gift of all, a car seat. The TV spot is highly produced, aimed at enticing children, but with a hint of seriousness at the end.

“Children must ride in car seats,” the voiceover says. 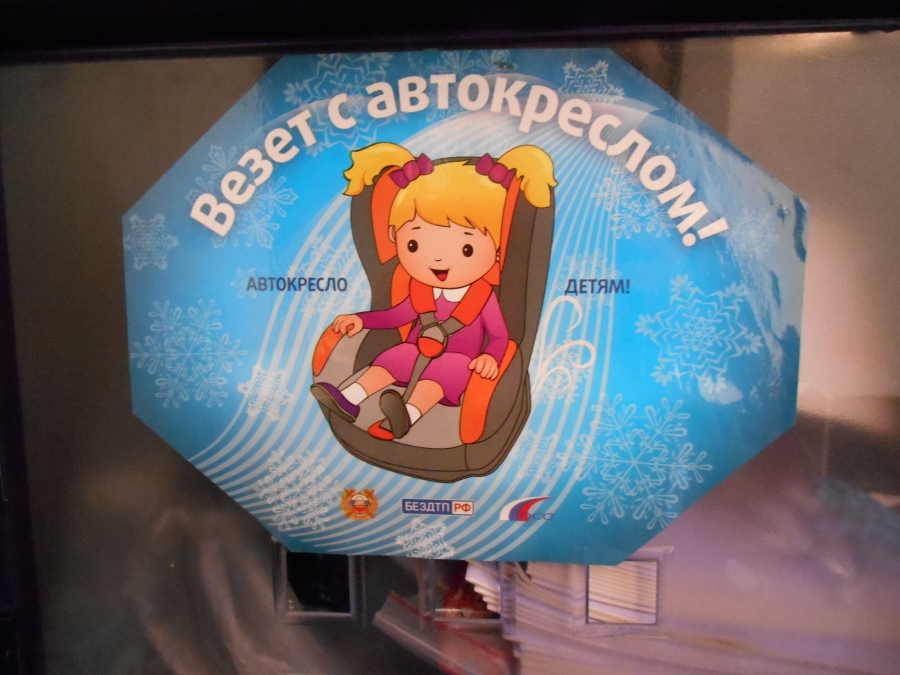 A promotional poster on the wall in Road Safety Russia, where a team of ad designers work on ways to persuade the Russian public to drive more safely.

The organization behind this and similar public service announcements is Road Safety Russia. The group’s director, Natalia Agre, says ads alone won’t do the trick. She works closely with Russia’s Ministry of Transportation to coordinate their campaigns with changing laws — such as a hefty new fine for not using a child car seat.

“It’s about $115, which is almost the cost of the car seat,” Agre says. “We cannot give parents a chance not to use the seat.”

A lot of people die on Russian roads: more than 27,000 last year alone, according to Agre’s group. Although the country’s traffic fatality rate is far higher than in Europe or the US, things are improving rapidly. The per capita death rate on Russian roads has dropped by about a fifth since it peaked a decade ago, and that is against a backdrop of more Russians owning cars.

Agre credits the road safety campaign for saving a lot of lives. “It would be about 50,000 people during the last eight years,” she says.

However Russians get the job done, their government’s push is welcome to others who are trying to put road safety higher on the world’s public health agenda.

“It’s been invaluable to have Russia as a leading country, both domestically — showing what can be done — and internationally, to try and get more international support for this issue,” says Avi Silverman of the FIA Foundation, a UK-based charity focused on driving issues. He recently attended a convention in New York that was timed to coincide with a UN resolution to make road safety a priority in 2015. Russia sponsored that resolution.

Natalia Agre sees Russia’s past failure to address road safety as an opportunity now. She has learned the hard way that fatalistic Russians do not respond to scare tactics — such as in her first ad, which showed a girl trapped in a car wreck that kills both parents. Now, Agre’s ads are relentlessly hip, upbeat, and positive.

One spot shows dancers wearing dark clothes emblazoned with reflective stripes. The goal is to encourage pedestrians to wear reflective gear so they will be visible to cars at night. What Agre is trying to do, she says, is change attitudes — to get Russians to look out for one another.

“We do not have to talk exactly about speeding. We do not have to talk about seat belts. We have to build a culture,” she says. “And this culture is supposed to be about people’s relationships, and their attitudes, and being proud of being Russians.” In other words, Agre wants to recast good driving as an essentially Russian trait, not something foreign to this country.

Moscow driver Vladimir Nagovitsyn admits he has seen things improve on Moscow roads over the last few years, but he points to another reason for the change.

“Мore people have been abroad,” he says. “They’re not violating the laws over there. You start to drive like they do.”