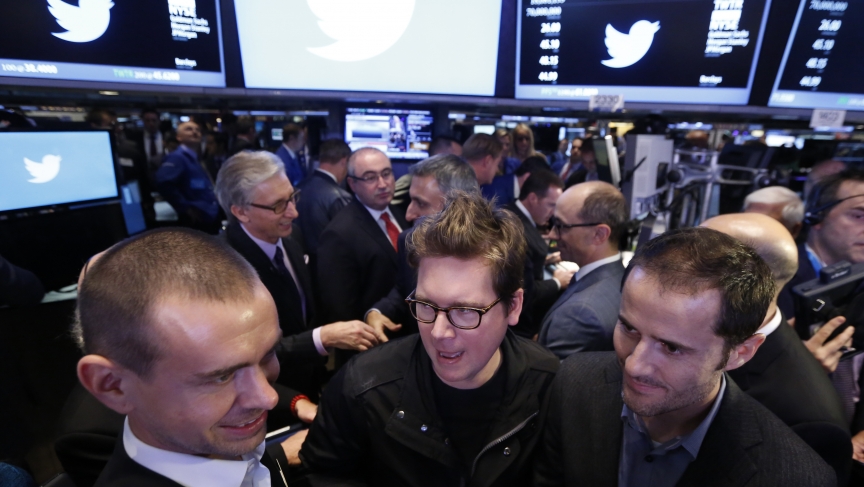 "It wasn't about the technology, it was about the people," Twitter co-founder Biz Stone says of the social media company's rise as a global political organizing force. "It just happens to be that Twitter was the right tool at the right place and right time."

While many people credit Twitter with starting the Arab Spring and changing the way we interact, Stone pushes back against that idea.

"It's people — it's not the platform — that's changing the world," he says. "I always like to say that AT&T didn't claim credit for bringing down the Berlin Wall just because people used telephones in the process."

But when Stone helped co-found Twitter in 2006, no one envisioned that the social media network would be used for anything more than sharing fun updates and photos with friends.

That changed for him when a University of California-Berkeley student traveled to Egypt in early 2008 and sent out two one-word tweets that became "one of many powerful moments, eye-opening moments" to Stone in Twitter's evolution.

The student had never heard of Twitter before his trip to Egypt, but signed up for an account while he was there, so he could find out when and where protest actions would take place. At one rally he attended, he was detained by police and only had time to tweet the word "arrested." His friends back in the US were able to see this tweet, contact a dean at the university to get a lawyer, and ultimately help free the student a few hours later, at which pointed he tweeted "released."

"What happened to me personally when I heard about people using the tool to self-organize and protest, and essentially topple regimes ... what occurred to me was that it wasn't about the technology," Stone says, echoing a dominant theme from his new book, Things A Little Bird Told Me: Confessions Of The Creative Mind. "It was about these brave people who were bleeding in the streets. And I came to the conclusion that if Twitter was to be a triumph, it was not to be a triumph of technology, but a triumph of humanity."

And while Twitter came to embrace these people using the platform to organize revolutions and protests, the oppressive governments of several countries, of course, did not. But Stone asserts that this never affected Twitter's perspective on the issues of global free speech.

When it came down to deciding where to draw the line on what users could say about their government in certain countries, Stone says the company always considered how to do right by the people using Twitter and not worry about what governments thought of its decisions.

"It didn't matter where the line is or how angry any government became because [the tweets] weren't theirs to do with as they pleased," Stone says. "We always erred on the side of trying to defend and protect the people using Twitter, because we thought of Twitter as a way to foster the freedom of speech around the world."

He acknowledges that today, as a massive corporation, Twitter "does have the challenge of being a publicly traded company — it has investors to answer to." But he doesn't think that will change the culture of Twitter.

"From my perspective, the ethos of Twitter has been deeply embedded into its culture and it's part of what makes Twitter special. It's part of why people are attracted to Twitter in the first place," Stone says.

He is now the founder and CEO of a new social media venture called Jelly. According to Stone, "Jelly is a reimagining of how we get our answers to queries, something that really hasn't been done in 15 years."

The platform connects users with questions to other users who have answers, by routing people's queries to people in their social networks, their friends' social networks, and in nearby locations.

"It really potentially increases the reach of your question to every person in the world," he says.

Curious what Stone's first name Biz is short for? Well, so was The World's Carol Hills. And it turns out, it's not short for anything — it's baby talk. Stone says when he was little, he would pronounce his real first name, Christopher, as "biziba'"in an attempt to replicate his father's Boston-accented pronunciation of his name. His mother thought it was cute, shortened it to Biz, and it stuck.