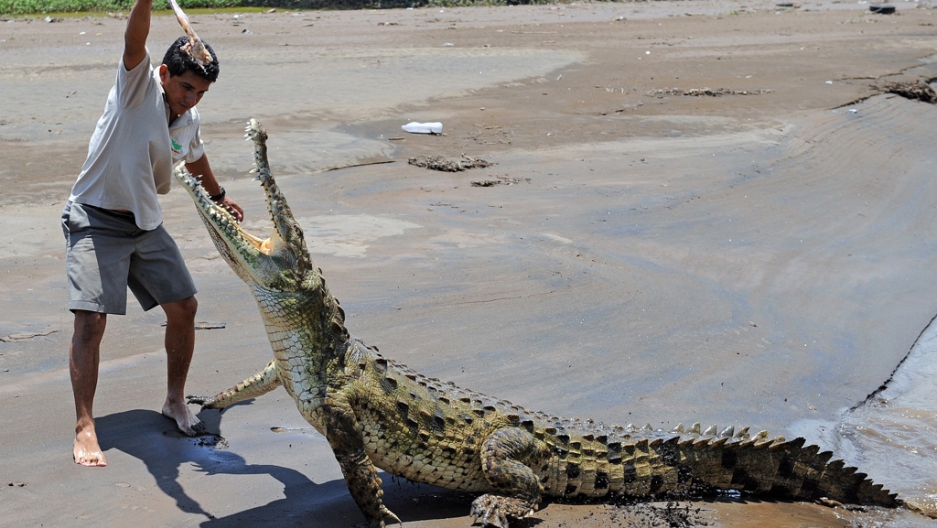 Juan Carlos Buitrago feeds a piece of chicken to a crocodile on the banks of Costa Rica's Tarcoles River.
Credit: Yuri Cortez
Share

SAN JOSE, Costa Rica — Lidieth Rojas was walking on the beach near Costa Rica’s Tarcoles River Thursday morning when something that washed ashore in front of her gave her chills.

She thought it could have been a coconut — it was about the right size — but there was something unmistakably human about it. It would take a police investigation and DNA tests to confirm her fears. The mystery object was a human head.

Specifically, it was the head of Omar de Jesus Jiron, a 32-year-old Nicaraguan who two days earlier was viciously ripped apart by the river’s sizeable bask of crocodiles. Despite multiple boat searches by the Red Cross, no other body parts were recovered.

The brutal scene took place at one of the most well-traveled tourist spots in all of Costa Rica: the Tarcoles River’s main bridge.

Located about halfway between the country’s main airport in the capital of San Jose and the popular Pacific beach town of Jaco, the bridge is the go-to pit stop for travelers making the journey. After buying some chilled coconut water and cheesy souvenirs most tourists will make the short walk down the bridge to snap photos of the river’s sunbathing American crocodiles.

Unlike the bridge’s other visitors, Jiron was not at the Tarcoles for wildlife spotting. He was there to go swimming.

According to police reports, Jiron and a co-worker were traveling by bus after losing their jobs in construction. The pair had been drinking heavily and was kicked off the bus near the Tarcoles bridge. After reaching the end of the bridge, a heavily intoxicated Jiron decided to take a dip in the river.

What happened next is still a mystery. Some witnesses say Jiron leaped off the top of the bridge, while others say he walked down the side of the bank and stripped off his clothes before lowering himself into the water. By all accounts, Jiron was only able to enjoy several seconds of his swim before he was pulled under the water by at least six crocodiles. Some witnesses say as many as 20 crocs eventually circled Jiron.

Red Cross officials arrived in a boat at the scene shortly after Jiron was attacked, but were unable to pull the man from the reptiles’ jaws.

“The saddest part is that it was impossible to help,” Jorge Matamoros, a Red Cross official at the scene, told the daily paper La Nacion. “We couldn’t get close enough to drive the animals away because the boat kept getting stuck. The tourist police and other people were screaming from the shore, but there was nothing we could do.”

Over the years, YouTube has been inundated with the exploits of tour guides and photographers nearly gobbled up by the river’s crocs, but actual attacks at the bridge are rare.

According to a study by Costa Rica’s National University, Jiron’s death is the only reported crocodile fatality at the bridge since 1999. According to the Worldwide Crocodilian Attack Database kept by the International Union for Conservation of Nature, there have been at least 34 crocodile attacks in Costa Rica since 1995.

A man attempts to feed a crocodile some raw meat but slips in the mud.

A photographer on the river’s edge is nearly grabbed by a crocodile when he turns away from the river.